Clemson had a lot of questions up front along the offensive side of the football heading into the 2012 season. Today we want to take a look at who played this season for the Tigers along with the general experience level of those who played.

We will begin with the individual items. Below are snap count numbers for all offensive linemen who played this season. 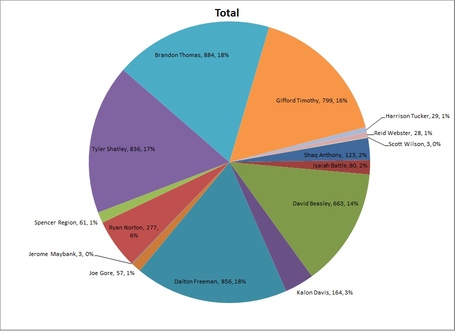 This group saw approximately 800 or more snaps from four (4) players: Dalton Freeman (856), Tyler Shatley (836), Brandon Thomas (884), and Gifford Timothy (799). Ryan Norton logged 277 snaps, David Beasley 663 snaps, and Kalon Davis 164. Only Freeman was a senior and only Norton a freshman from the aforementioned players. 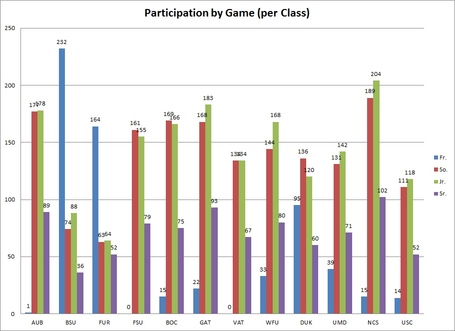 As mentioned earlier, the lone senior on this offensive line was Dalton Freeman. Hence, all senior snaps shown in the game by game analysis above as well as the overall total overall participation numbers later in the article can be attributed solely to him. Likewise, the only juniors who received snaps on the season were Tyler Shatley and Brandon Thomas, so those two guys represented all the junior snaps with each receiving approximately half of the 1720 total snaps for this class this season. David Beasley, Kalon Davis, Gifford Timothy, Reid Webster, and Scott Wilson were the sophomore contributors though Webster/Scott contributed with only 31 snaps between the two. I'll note that Davis suffered a hamstring injury back in September that influenced his playing time. The freshman participation featured quite a few more players, as shown in the freshman participation chart shown below. 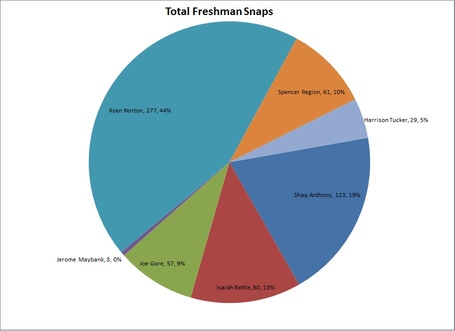 Overall participation by class is shown below. These numbers show that Clemson will be losing a large number of snaps through graduation but will have experienced senior leadership heading into the '13 season as well as a core group of juniors and sophomores who have been on the field. The fact that Clemson loses but one starter should give us a better idea of this offensive line next preseason. 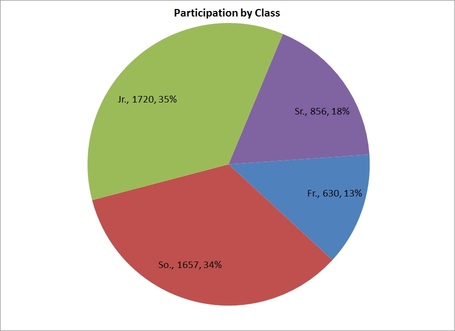 Overall, Clemson played a core group of starters but did intentionally substitute in younger players in blowout games such as Duke, Ball State, and Furman. Quantitatively, the Tigers should be in better shape this coming season up front than the past two--though we would like to see more tangible evidence that eight (8) linemen are capable of making up our lineman rotation.