The defensive backfield was a source of anguish for most Clemson fans this season. Today we'll look at who played this season. We'll get a better view of who played the most snaps in '12 and who will be back for next year's campaign.

We will begin with the individual items. Below are snap count numbers for all defensive backs who played this season. 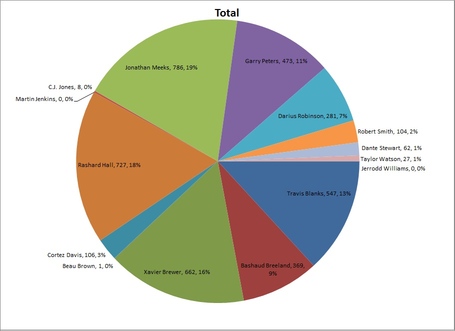 You probably noticed that a core group took the vast majority of the snaps. Rashard Hall and Johnathan Meeks each played well over 700 snaps. These safeties were used extensively over the season. Xavier Brewer was used in the defensive backfield to the tune of 662 snaps and freshman Travis Blanks rotated into the game for an impressive 550 snaps in the '12 regular season. Peters, Robinson, and Breeland were the staff's choice at corner. Peters' snaps were drastically increased due to injuries to both Breeland and Robinson over the course of the season. Of these snaps, Brewer, Hall, and Meeks were all seniors--accounting for nearly 2200 snaps among the three.

Class participation per game is shown below. The dramatic drop in snaps taken by the Junior class over the season is directly attributable to Darius Robinson. 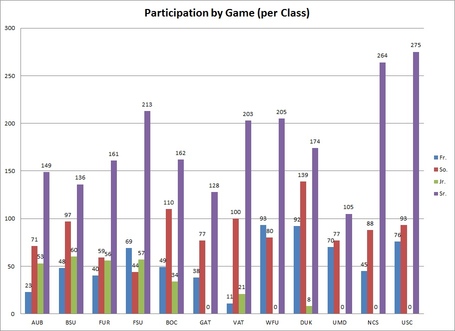 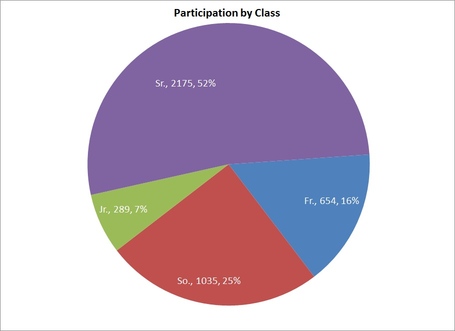 Clearly, Meeks/Hall/Brewer contributed the majority of the snaps over the football season. Travis Blanks gave us the majority of the freshman snaps, with Cortez Davis playing just over 100 snaps this year. Robinson accounted for nearly all of the junior snaps. Breeland, Peters, and Robert Smith were involved in all but 90 of the sophomore plays.

I definitely won't get into the qualitative aspects of this group, only quantitative. It is pretty apparent from the numbers above that Clemson has a lot of experience to replace--especially at both the free and strong safety positions. Robert Smith is the lone undergraduate with experience at the safety spot. Blanks will move there for bowl practice and indefinitely following the bowl. Clemson will get Darius Robinson back for his senior season and Breeland should be back for the bowl game.