The Maryland Terps travel down to Death Valley for Clemson's second to last ACC football game this season. With victories the next two weeks, our Tigers can go through an entire season without losing to a team that we clearly should not lose to, so keep that in mind as you watch the next two ball games. While Maryland may not be the best team out there, they annually give us fits and have been known to beat Clemson when the Tigers looked to be the easy favorite. We'll get you the basic information on UMd and what we expect throughout this article.

Per typical, here is your basic game information courtesy the CUAD. 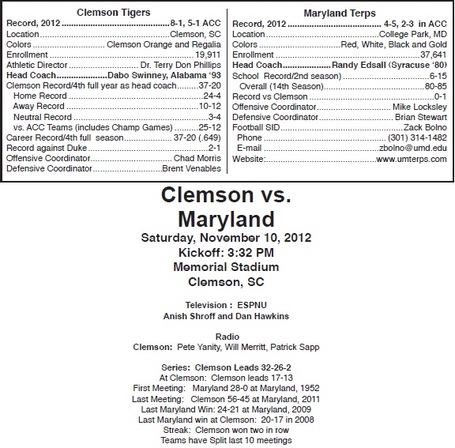 Randy Edsall is no stranger to Northeast colleges and universities. Edsall spent his playing days at Syracuse ('76-'79) playing quarterback then stayed with the Orangemen coaching various positions through the 1990 season. Edsall was then the DB's coach and Boston College and for the Jacksonville Jaguars then spent a season as Georgia Tech's defensive coordinator ('98) prior to taking his first head coaching gig at UConn in December 1998 following the resignation of Skip Holtz (though Skip won there, he wanted the OC job at SC). Edsall led the Huskies from the 1-AA ranks to 1-A then into the Big East and, following the 2010 season, to the Fiesta Bowl. There he ran a conservative I-formation offense that was very fundamentally sound, though low on outright talent. Edsall replaced both of his coordinators last offseason, and we give you an overview of both below.
Mike Locksley runs the Terp offense. Locksley has been all over the place, graduating from Townsend. His coaching career includes stints as a running backs coach at Maryland from '97-'02, Florida in 2003 & 2004, a couple years as offensive coordinator at Illinois, then was the head coach at New Mexico from 2009-2011 before becoming the offensive coordinator at Maryland prior to this season. You'll probably recall that he had a couple reprimands while at New Mexico State while his teams only won two games in his 2.5 seasons as head man there. Locksley is a native of Washington, DC and is known as a powerful recruiter in that area. He loaded up Ron Zook's teams with guys there and will likely make a dent in this area for Maryland.
Brian Stewart is in charge of the other side of the football for the Terps. His playing career was dedicated to the defensive backfield at Northern Arizona and Santa Monica College. Stewart spent most of the 2000's coaching in the pros (Texans, Chargers, Cowboys, and Eagles) before taking the defensive coordinator job at Houston. He coached at Houston during the 2010 and 2011 seasons and is in his first season in College Park.
Here are the basic stats on the season courtesy ESPN: 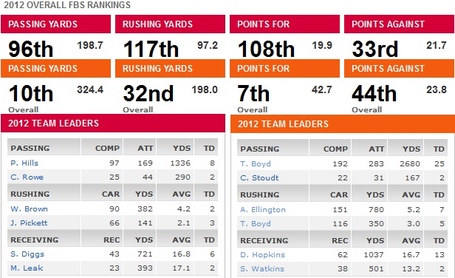 Maryland is very much a spread football offense. They like the direct snap and will feature 3 WRs and a TE or 4 WRs out of the gun if they have their way. We have seen the Terps under center, but expect them to operate out of the gun and attempt to move the pocket when throwing the football/utilizing their quarterback.

As depicted by the statistics, Maryland's offense is simply not good--and it all starts up front. The Terps have been garbage as an offensive line. This line certainly has not helped the health of the Maryland quarterbacks. The Terps have been ravaged by injuries at the QB position and now start freshman linebacker Shawn Petty at the signal caller position. I believe there were four QBs in front of him who have been injured this season including incumbent QB C.J. Brown who was injured in Fall Camp/Practice. Along those same lines, Stefon Diggs--easily their best receiver--is out with an ankle injury as is their best running back, Wes Brown. This team is really beaten up and is definitely a shell of what we would have expected coming into this football season. Diggs looks to be the real deal and the last lethal threat the Terps had on offense. The freshman had well over 700 yards receiving following the GT game and was a legit threat in the kick return category. He will be sorely missed by the Turtles this week.
In his only start this season, Petty was able to throw two touchdown passes, though both of these scores were achieved well after Georgia Tech was running away with the football game last week. For what it is worth, he was 9/18 for 115 yards, 2 TDs, and one interception against a bad Tech defense.
Even with Wes Brown and Diggs last week, the Maryland offense was pitiful. Georgia Tech stacked the box and brought constant pressure to counter a weak Maryland front and a linebacker at quarterback. Maryland simply was unable to pick up first downs and move the football in the face of this defense. Let's also not fool ourselves, the Georgia Tech defense is very bad and it just does not look good for the Terrapins moving forward.
Defensively, Maryland employes 3-4 look. They are transitioning from a base 4-2-5 last season and look to be comfortable putting that fourth hand on the ground as situations dictate. The Terps are led defensively by end Joe Vellano. Clemson will need to account for him on each play because he is capable of wreaking havoc on an offense. The other key item is the NG. We've discussed Clemson's issues when the opponent covers the center and those issues are still valid. We told you that we would cover Dalton Freeman every play and still think that is a very valid strategy as Freeman is much less effective with a defensive hat directly over the football. Also keep in mind our previous discussions regarding fronts. Maryland will creep one or both of their OLBs to the LOS and effectively create a four or five man front. Also a trademark of the 3-4 defense is the need to constantly bring extra pressure--so look for a variety of schemes that bring both inside and outside linebackers.
Lots of football teams have had success this season running the ball against Maryland and I hope Clemson will do the same. They gave up boatloads of yards against the likes of Virginia and, obviously, Georgia Tech. This instantly opens up the play action and keeps their defense on their heels and constantly focused on having to stop the run with more than their base attack.

I've heard some praise about the Maryland secondary and thing they are a capable group. Clemson, with all their talent, really should not fear these guys. If Clemson can also get the ground game going, it is over for the Maryland defense as they will have to respect the run (and play action) and will place these defensive backs in very tough situations against Clemson's outstanding wide receivers. I would not, though, be overly cocky as this defense did hold West Virginia to 31 points which, from the outside, seems impressive.
I suspect we will see a good bit of zone out of the Terp defense. I also suspect they will pull a linebacker off the field to get the extra defensive back in to the game. This will trigger an OLB creeping up or another defensive lineman inserted into the game to show a four man front. I think this is unavoidable as Maryland does not want a linebacker responsible for any of our receivers.
If we can catch them with their base personnel on the field, The Chad will attack these backers. Many teams this season have had tons of success running wheel routes (both with receivers and folks out of the backfield) against this group. We'll be watching the defensive layouts and scream to attack linebackers in coverage if Maryland makes such a decision.

Long and short, this Maryland team is simply not very good. They were marginal at best prior to all the offensive injuries and now are playing with much less than a full force. Clemson will want to assure it does not let Maryland run the football and keep pressure on Petty. He is obviously not a legit passing threat, so you suspect our secondary will be licking their chops when he does throw the ball particularly with Maryland's best receiver on the sidelines.

Offensively, Clemson should be focused on getting the ground game going first and foremost. As previously stated, Maryland has given up quite a few yards on the ground this season. If the Tigers can crank up the stable of backs, this thing will be over early because the Terps will have to commit extra bodies to stopping this threat, leaving their secondary vulnerable to the likes of Nuk hopkins, Sammy Watkins, and Martavis Bryant. I will point out, though, this defense has shown some fight and sits at a respectable 31st overall in points given up. While I think Clemson will score points, I am not licking my chops in the same fashion as the last two weeks.
Overall, Clemson should roll tomorrow. Maryland is beaten up and, despite our issues on the defensive side of the football, should not be able to move the football. I look for the Clemson offense to fatigue the Terp defense and the Clemson defense to force a lot of punts given the anemic condition of the Maryland offense. This one should be well in hand by half, leaving Clemson with just NC State left on the ACC slate. Clemson must, though, play with passion these next two weeks (and obviously against Scar) as there is still a lot on the line for the Tigers should they run the table.