The high octane Clemson offense continues to keep the scoreboard operators busy week after week, while the Clemson defense continues to frustrate, while simultaneously showing signs of growth and improvement each week. The evidence of both units can be seen by watching the games and they are showing up on the stat sheets as well.

Share All sharing options for: Statistical Comparison--Clemson vs. Duke Edition

Let's start this week with both the year to date stat charts. I'm not going to comment too much on the charts, because if you've been reading throughout the season you pretty much know what you are going to see. 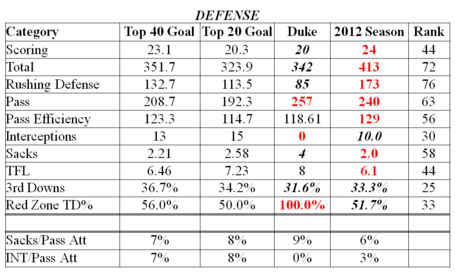 The stats speak for themselves on the offensive side of the ball--several Top 10 rankings to this point in the season as well as eclipsing the benchmarks set at the beginning of the season. The offense has been clicking on all cylinders over the past 2 weeks--yes, the competition has not been top notch, but how often have seasons' past included a whole bunch of games where the Tigers 'played down to the level of competition'?

On the defensive side of the ball, there continues to be improvement in some categories--while the Tigers still gave up over 400 yards of offense and had some serious defensive breakdowns in the first half, they held Duke to 10 points below their season average. There were more negative plays than have been typical (8 TFLs) and 4 more sacks on Saturday night in Durham.

Amazingly, in a game won by 36 points (and could have been a lot more if Dabo had let the offense continue to throw downfield), the Tigers lost the turnover battle by 4. This is one reason why using overall turnover margin as a bellwether stat can lead to the wrong conclusion. However, it does not take a football genius to figure out that if the Tigers continue to turn the ball over at that rate over the next few weeks, it will cause a loss...and probably 2.

Switching gears now to do some comparisons with the 2011 offensive and defensive units. 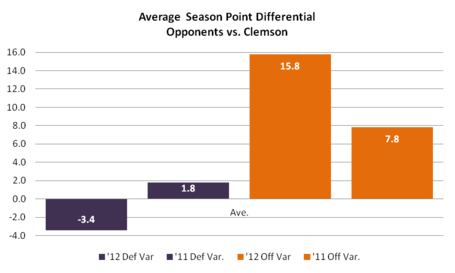 The chart above depicts the average variance to Clemson's opponents' scoring averages--the purple bars are for defense and the orange for offense. For example, Duke is averaging 30.7 points per game this year on offense and scored only 20 against Clemson, so Clemson held Duke 10 points under their season average.

If we stay on the defensive side of the ball, through 8 games (this excludes Furman this season and Wofford last year) the Tigers defense has been holding opponents, on average, 3 points below their season scoring average. The have now gone 4 consecutive games holding opponents below their scoring average and 6 of 8 games this season (although Auburn was by the slimmest of margins...less than 1 point).

Interestingly, this is an improvement in comparison to the 2011 squad that actually gave up 1 more point per game than their opponents average. There is an asterisk required, though, as that average increased greatly after the Orange Bowl. If you exclude the debacle in Miami, the 2011 defense gave up just under 1 point less per game, so still an improvement so far this year.

On the offensive side of the ball, the stat is similar. On average, how many more points has the Clemson offense scored in comparison to their opponents' average points allowed? Through 8 games, that number is over 2 touchdowns more per game. Again, using Duke as an example, the Blue Devils give up 32.6 points per game and Tajh Boyd and crew put 56 on the board against them (that would be nearly 24 points more than their season average). To date, only Auburn has held Clemson to fewer points than their season scoring average--anyone care to wager the likelihood that they could do it again?

That is the good news--the only bad news is that in 2011, 4 teams held Clemson's offense to fewer points than they gave up per game on the season...Virginia Tech, Georgia Tech, NC State and South Carolina and those are the last 2 games of the season. So, while the numbers are great to date, how the season ends (11-1 vs. 10-2 vs...gasp!!! 9-3) will have everything to do with the offense playing at high level in those last 2 games.

It's also worth pointing out that the 2011 Maryland Terrapins averaged only 23 points per game...and that number includes a 45 point effort against the Clemson defense. This season, they have average 19.9 points per game--let's hope they don't go for 41 on Saturday.

The game by game stats are below as are the predictions for the final 3 games. So, more or less, in each of the rest of the games, the algorithm is predicting that the Tigers will hold opponents at or below their season scoring average, while the offense will continue to score between 2 or 3 touchdowns more per game than their opponents typically allow.