Figure 1 and Table I both show an average of offensive players, defensive players, and specialist listed on the two-deep roster. Tables II through IV show the two-deep roster used for analysis along with the recruiting ratings for each player on the roster. Maryland trails Clemson by just under a third of a star on average against Clemson's offensive average. Defensively, Clemson was the decisive winner, 0.86 stars per player ahead of Maryland. The Special Teams comparison was dominated by Maryland, though you will notice that Clemson has three kickers with 2-3 star ratings included in these averages while none of Maryland's are included. Many great kickers were either not rated or walked on, so I am not so sure how important this one is (though for the record Maryland rolls there). Overall, Clemson holds a 0.44 star per player advantage over the Terps strictly looking at the "experts" ratings of players. 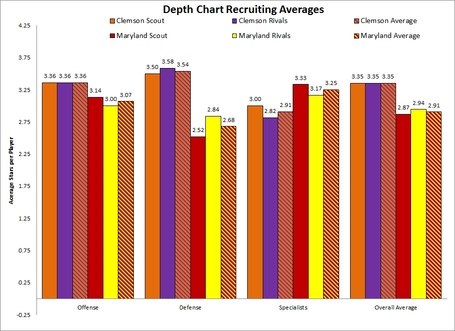