With the addition of Louisville to the ACC, we wanted to examine how the Cardinals compare to our Tigers in terms of overall finances. All data shown in this article was attained through the USA Today website and pertains only to public universities who disclose this information. USA Today typically releases its data each May. Consequently, data available and used for this assessment is only thought FY '11--though the comparison should give us a pretty good feel for how Louisville and Clemson compare money-wise over the past half decade or so.

The overall numbers for Fiscal Year 2011 look like this:

These numbers show a distinct disparity for all categories in FY '11. I do not, however, believe that these numbers show the entire financial comparison between the two schools. UL officials stated that FY '11 (academic year 2010-2011) was an exceptional year that exceeded all estimates. Thus, we'll look at data from 2006 to 2011 to try and figure out how UL compares to our Tigers over the past half decade or so. 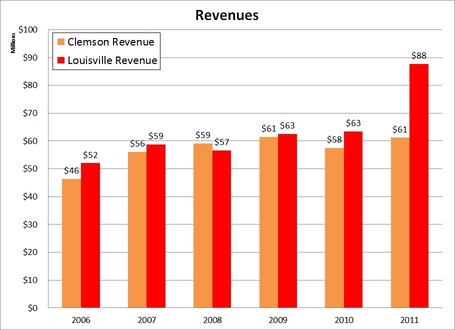 What you likely noticed was that the two schools were relatively similar in revenue from '06 to '10. The largest gap was (rounded) $6 million in 2006 and Clemson brought in more revenue than the Cardinals in 2008. 2011 was the lone season where Louisville crushed Clemson, raising approximately $17 million more than our Tigers.

Expenses basically followed suit for this time period. As shown below, the numbers are relatively close between the two schools from 2006 to 2011. Louisville outspent Clemson in two of those five years but never by more than approximately $4 million. That spending ballooned in 2011, rising to about $82 million, approximately $24 million more than the CUAD spent in FY '11. 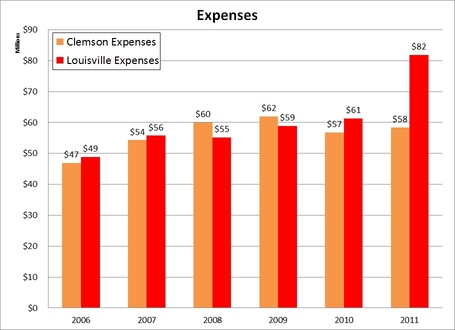 Profit-wise, Louisville historically has netted more cash than Clemson, as shown below. 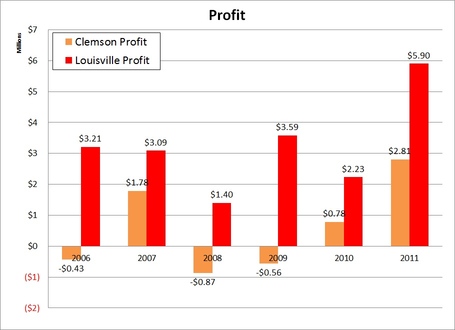 What you'll notice is that UL did not run a deficit from FY '06 to FY '11. Their low profit year of '08 was better than all but two of Clemson's over this time period. The aforementioned big revenue generated in 2011 left that FY with a nice $5.9 million profit. This figure exceeded the SUM of Clemson's three profitable years over this period.

What caused this rapid influx of cheddar at Louisville for FY '11? The answer is surprisingly obvious...facilities. The KFC YUM! Center was built in downtown Louisville and began hosing UL games for the 2010-11 basketball season. Increased attendance as well as elevated revenue from luxury boxes/suites in the new arena brought in a dramatic cash increase. Louisville also expanded their stadium. The total increased the stadium size from 42,000 to 55,000. Much of this new capacity was dedicated to club seating, luxury boxes, and other amenities. UL AD representatives pointed to the new facilities as the main driver for revenue growth. Not surprisingly, UL representatives also noted that donations increased as well--not a coincidence that the increase came with major facility upgrades and expansions.

In case you are curious how other Big East teams stack up against Clemson, we put together an article last year making such a comparison and can be found here.