It is that time again. The battle for bragging rights in the Palmetto State is upon us as South Carolina rolls into Clemson sporting a three game winning streak in the series. Both teams come in with very respectable records...the Tigers at 10-1 and Gamecocks at 9-2. Both have a lot to play for as a win and a couple breaks around the college football world could help either advance to a BCS bowl game to cap this season.

Per usual, the general game information courtesy the CUAD: 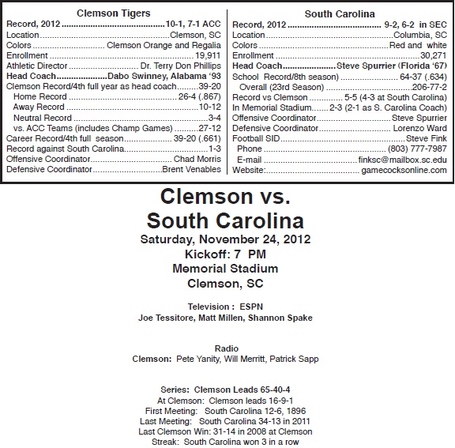 They hay is in the barn here at STS in anticipation of this year's game against the Gamecocks. We've spent some time the past couple weeks describing the Gamecocks and I would highly encourage you to look through this stream for answers to Scar personnel, schemes, and tendencies along with some insight on how Clemson can attack the visiting Cocks.

South Carolina is led by Head Coach Steve Spurrier. He is effectively their offensive coordinator and has been since arriving at the school. Though at several points during his tenure he has given up the playcalling reins to an assistant, there is no doubt that he is fully back in the saddle there and will be the offensive architect for this team this week. Spurrier had a very successful college career down at Florida where he won the Heisman Trophy as the Gators' quarterback. After a couple years in the pro game, the OBC got into coaching. He developed his own offense at Duke then in the USFL. This offense would then be leveraged into a bunch of wins at Duke, Florida, and now in Columbia. This offense has morphed over the years from "Fun 'n Gun" to a more tame/seemingly conservative version folks at SC refer to as the "Cock 'n Fire." While Spurrier has always emphasized the running game, his offenses at Florida were more wide open and more prolific. He has turned Scar's football program around with a greater emphasis on the run game and more ball control. This evolution showed that the OBC was willing to adapt in order to win--though you can still tell he wants to throw the ball all over the field and would do so if he had different personnel.

Carolina features a multiple attack that shows multiple formations from the "I" all the way to spread gun looks. Again, all of this stuff was covered in depth earlier so I'll implore you to brush up on the players, formations, and tendencies through articles written here at STS over the past couple weeks. These are all included in the story stream mentioned above.

Lorenzo "Whammy" Ward is the defensive signal caller for the Gamecocks. He took over the reigns of defensive coordinator from Ellis Johnson prior to last year's bowl game. Prior to his promotion, Ward focused on Scar's secondary. Whammy played his college ball at Bammer in the late '80's. He returned to Tuscaloosa as a grad assistant under Ellis Johnson. After a year in the high school ranks and a season at Bama again in '93, Ward joined the UT Chattanooga staff. Ward has experience coaching under Frank Beamer, coaching in the pros for the Oakland Raiders, and at Arkansas before landing at Scar in 2008.

Here are the overall statistics for both teams heading into this weekend's football game: 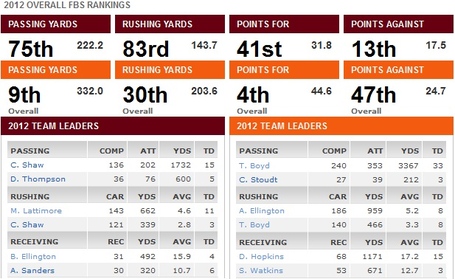 The stats are pretty telling here...South Carolina's strengths lie in controlling the game and playing defense. Clemson puts up a lot of points but gives up some points as well. We've beaten up these issues pretty well here over this season so everyone should be well-versed in these areas. Clemson has thrown the ball all over the place all season while Carolina has been a grind it out type of team. What I've missed so far in the Carolina/Clemson comparison is the quarterback rushes. I harped repeatedly on Shaw's threat as a runner and avoided Boyd's. Boyd has some wheels and appears to be in his fittest collegiate shape this deep into a football season. Boyd's legs on designed runs and scampers following good coverage downfield/pocket breakdown has him credited with 20 more carries and approx 130 more yards to date. I realize that some of these carries are attributed to sacks but so are the yards.

Another item that has been discussed little here is special teams play. We all know Catman is very dependable but so is Carolina's Adam Yates. Yates is 9/13 on field goal attempts including a 51 yarder this season. The items that are really concerning for me are South Carolina's return teams--both kick and punt. Scar returner Ace Sanders has turned in quite a few Sportscenter Highlights returning punts this season. Clemson's kickoff coverage team has struggled at times this season (most notably allowing a huge return against FSU that completely flipped momentum down in Tallahassee). Clemson obviously must not give up cheap yards in this area.

This is the first real test for our Tigers since the Florida State game. South Carolina is a legit Top 10-15 football team. We'll use this as a measuring stick to see how much improvement we've seen (A) year over year and (B) since the beginning of the season. A win here would legitimize this Clemson football team via two SEC wins and a win over a quality opponent.

Nutshell perspective...Clemson must first stop the Carolina running game and make Conner Shaw beat them throwing the football down the field. We've all come to the realization that the Clemson secondary will give up yards. We cannot, however, let Scar dictate the pace of play with them running methodically up and down the field without taking risks throwing the ball more than 10 yards past the LOS. On the other side of the ball, Clemson has to keep the Carolina defensive line at bay and Tajh upright in the pocket. If Clemson can muster some yards on the ground and protect the quarterback, our receivers can have another big day. What this offense (and, in turn the Clemson defense) can ill-afford is a bunch of 3-5 play drives that end in a punt. Keeping the defense on the field without scoring will wear down our guys and, thus, allow Scar to eventually run the ball.

The best thing that we can hope for is for the Tigers to jump out to an early lead (similar to the Scar/Florida game) or like we did during the middle of the NCST game and get the Gamecocks out of their running/grind it out fashion. The thing I fear is something similar to the Gamecocks' game against Mizzouri or Tennessee where their offense could not be stopped and, in the case of Tennessee, we just cannot score enough to win. I am not sure Carolina's offense is explosive like FSU or NCST but both of those teams had big point spurts late in the game. In the FSU game, a long return completely changed momentum and I could see them breaking off the Tigers with one of those. We'll see what happens Saturday night.