Another Clemson win, another week where the old abacus had to work overtime to calculate the offensive stats. Unfortunately, it didn't get any rest when calculating the defensive stats against NC State.

Share All sharing options for: Clemson Statistical Expectations and Performance

Similar to last week, focus will be more on some of the key stats for Saturday's showdown with the Gamecocks as opposed to looking at last weeks' game and the year to date stats.

Starting with the 'efficiency' stats first--per game and per possession comparisons of Clemson's offense vs. the national average and 90th percentile along with a comparison of South Carolina's defense across those same dimensions.

Another key area is negative plays (calculated as Sacks + TFL's). SC ranks 11th nationally in negative plays forced at over 10 per game, while the Clemson offense has 6.6 negative plays per game, ranking 45th. Limiting sacks to just a couple as well as gaining positive yards on most rushing attempts will be key. 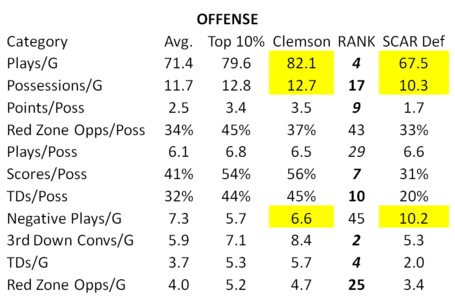 Before getting to the comparisons, an interesting note to make...there is certainly a relationship with allowing points and having a fast-paced high scoring offense on the other side of the field. The Tiger's defense is 90th in the country in possessions/game, nearly an extra possession per game, while the points per possession allowed ranks a not horrible (not acceptable, but not horrible) 39th. If you look at the 30 defenses that have faced the most possessions per game vs. those that have faced the fewest possessions per game, there is a full TD per game difference in scoring average (30 vs. 23).

But, let's get back to this game--negative plays and 3rd downs will play a big factor. South Carolina has been prone to negative plays allowed at over 8 per game so far this season. The Clemson defense has improved drastically in this area over the past 4-5 weeks, now averaging over 8 as well. If the Tigers defense can force 2-3 sacks and an additional several negative rushing plays creating 3rd and long situations, that should play into their strength. Further, SC is only converting 5.5 third downs per game, which is only a bit higher than the 5 that Clemson allows. Clemson still ranks in the Top 25 in 3rd down conversion percentage. 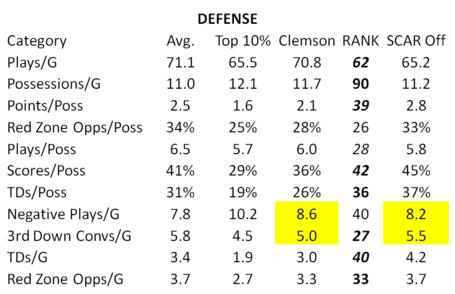 The next two tables are the year to date stats along with the stats from the NC State game in comparison to pre-season expectations for each unit. 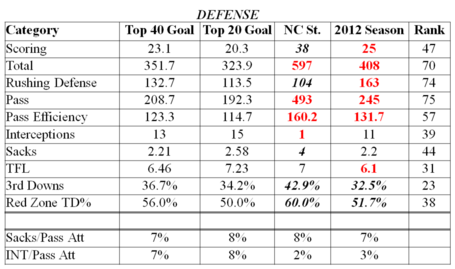 So, this week's game against South Carolina is strength vs. strength and weakness vs. weakness. The last time we said that in this space was against Florida State and while the offense performed extremely well (Clemson scored 15 points more than any other team has against FSU and 30 more than any team has scored against them at Doak Campbell this year) the defense didn't hold up their end of the bargain and got run over in the 2nd half after building a 14 points lead.

I'd say it's a fair statement to say that FSU's offense is greater than South Carolina's in addition to playing in Death Valley. Trusty old prediction machine spits out a 37-31 Tiger victory. I ran the algorithm with the past 5 years Clemson-Carolina games and it's been right 4 out of 5 times (only miss was '09 game). Here's to hoping it makes it 5 out of 6.