Figure 1 and Table I both show an average of offensive players, defensive players, and specialist listed on the two-deep roster. Tables II through IV show the two-deep roster used for analysis along with the recruiting ratings for each player on the roster. Clemson is, on paper, better than Scar in both offensive and defensive stars per player recruited. Clemson lags Carolina on the specialists front but still maintains an approximate 0.2 stars per player overall advantage over the Gamecocks. I will point out that since Bruce Ellington was only concerned with basketball coming out of HS, he was not given a Rivals rating and scored a mere 2 stars from Scout. He should have a higher rating and would have had he been committed to playing college football when he left Berkeley HS. 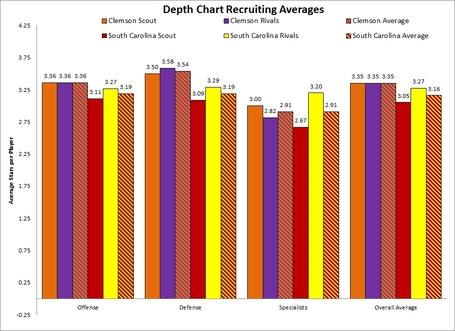