Clemson heads to Durham for the first night game between these two universities. Duke is a good bit more dangerous than usual and is currently tied for first in the Coastal Division. Clemson, likewise, is tied for its division lead and must essentially win out and get some help to win the division outright and get the opportunity to go to the ACCCG. 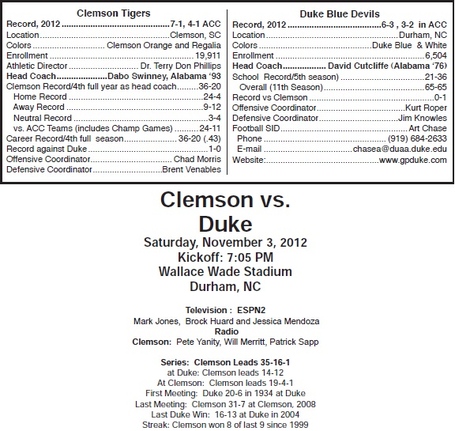 Clemson struts into Durham with a 7-1 overall record and 4-1 in conference. The Tigers are coming off of a convincing Thursday night victory over Wake Forest to cap off their October football schedule. Duke enters this contest with a 6-3 record overall, 3-2 in conference play. The Blue Devils are, though, coming off a beat down last Saturday at the hands of Florida State in Tallahassee.

Duke is led by Alabama graduate David Cutcliffe. Coach Cut is a fellow who is widely recognized as one of the best quarterbacks coaches in America and often associated with his two star pupils--Peyton and Eli Manning. Cutcliffe is an excellent quarterbacks coach and, in addition to the Manning boys, also helped Heath Shuler, Erik Ainge, and Thaddeus Lewis make it to the Pro Ranks. An interesting fact about Cutcliffe is that he did not play football in college. He attended Alabama and was a student assistant under The Bear before moving onto the high school ranks and, in the early '80's, onto Johnny Majors' staff at Tennessee. He coached the TE's from '83 to '89 and quarterbacks from that point until he left to go to Ole Miss prior to the 1999 season as the head man. Also of note is that Cutcliffe was the Offensive Coordinator at Tennessee from '93 to '98 and was a critical part of the Tennessee National Championship run during the '98 season.

Cutcliffe, in my opinion, has always been an underrated football coach. I think most will now agree that he got run off prematurely from Mississippi. The man had a pretty good run in a place that had become difficult to win only to get jacked one year after tying for the Western Conference title with LSU, winning the Cotton Bowl, winning 10 football games, and finishing #13 in the nation in 2003. The 2004 Ole Miss team was 4-7 overall but did lose players from the previous year, most notably Eli Manning. Cutcliffe was asked to make some adjustments to his style and his staff and, after refusing to fire assistants, was fired by the Mississippi Athletics Department. I said it now and I'll say it again, Ole Miss made a big mistake there and some school (apparently Duke) will get a really good coach because of Miss' stupidity.

Following his departure at Ole Miss, Cutcliffe went back to UT as--again--their offensive coordinator for the '06-'07 campaigns. He was hired as the head man at Duke in anticipation of the '08 season and has been there ever since. While his record at Duke (21-36, 9-28) may seem poor at first glance, you must remember he took over one of the worse football programs in the country (with tough academic requirements) and now has these guys bowl eligible and playing some respectable football.

As you may expect out of a Cutcliffe team, Duke likes to throw the ball around and does it well. Their offensive coordinator, Kurt Roper, is also their quarterbacks coach. Roper is no stranger to big time Southern football as he spent time at Ole Miss, Tennessee, and Kentucky before following Cutcliffe to Durham. The Blue Devils have been impressive throwing the football this season and average just under 32 points on offense per game. This is a remarkable turnaround from what we was up there half a decade ago and the Cutcliffe/Roper combination in the cause for this passing attack.

Defensively, Duke is led by Jim Knowles. Knowles is a Cornell grad who spent a large part of his coaching career at Cornell, including a stretch from'04 to '09 as their head coach. He joined the Duke staff as defensive coordinator in late December, 2009. While he has not been as successful as his offensive counterparts (Duke averages giving up 30 points per game), the Blue Devils appeared operable defensively in wins against teams like Virginia and North Carolina, especially through three quarters. The UNC win was a pleasant surprise for many Duke fans and a football program that had not had a victory against the in-state rival in quite some time. 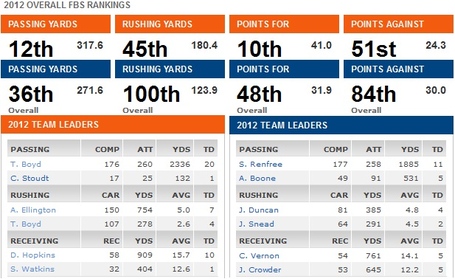 Duke's base defense is a 4-2-5, so there will be little personnel changes needed to face Clemson's spread formations. One thing you will notice is Duke's insistence on playing ODD fronds. As we've said all year long, this is not good for Clemson as Dalton Freeman cannot handle a nose. If I were playing Clemson, I would cover the center all night for that simple point. In my limited film review, I did see some stinting along the defensive line which could also confuse the Clemson offensive line.

Duke is not afraid to get aggressive bringing players on passing situations. This explains some of the big plays they have given up this season, though a large portion of the big plays given up through the air is due to inferior secondary talent compared to their opponents. What this means for Clemson and Tajh Boyd is that Boyd wil ned to be cognizant of where the pressure will come from and be able to quickly adjust and get the ball to Clemson's superior wide receiver talent.

The Duke offense employes a pro/spread attack. They make no bones about it, Cutcliffe and crew wants to throw the football. They will attack the middle of the field with post and dig routes. They will also show you a more "traditional" layered routing scheme requiring the quarterback to get through his progression properly and at all field levels. Most of the big plays I've seen out of this squad this year came getting the ball down the field on simple post routes. With the issues Clemson's had this season in the secondary (this includes poor play and a series of injuries), I expect Duke to attack and keep on attacking down the field.

Personnel-wise, Duke is led by Senior QB Sean Renfree. Renfree is very capable at the helm as he threw for approximately 3000 yards in both '10 and '11 and has 1885 yards in the eight games he started (keep in mind that he did not finish the FSU game last week). He did miss the UVa game after suffering an arm injury against Wake. I will point out that Renfree is listed as probable on the injury report due to a concussion suffered last week in Tallahassee. If Renfree cannot go, sophomore Anthony Boone will be the signal caller. He started the UVa game and got significant playing time against Stanford and Florida State, though I think Duke is much less potent offensively without Renfree.

Duke has two good receivers, Conner Vernon and Jamison Crowder. Both of these guys have over 50 catches so far this season. Crowder has 645 yards receiving/ 5 TDs on the year and Vernon 761 yards/5 TDs so far. You will also likely remember that Conner was the victim of a real cheap shot when he was decked during a substitution. Keep it classy UNC.

Duke has not been as successful running the football. As a team, the Blue Devils have 313 carries for 1115 yards on the season. Their leading rusher is Jela Duncan, who has 385 yards so far on 81 rushes. Behind him, Josh Snead has nearly 300 yards on the season and Juwan Thompson 277 yards on 64 and 60 carries, respectively. All of these guys average 4.5 ypc or better, so when Duke does mix in a run they have been fairly successful.

Overall, this is not your typical Duke football team. What David Cutcliffe and his staff have done up there is very impressive, particularly when you consider how big of a hole Teddy Roof and his predecessors dug for Duke football. However, Clemson is much better than Duke and should win this thing handily. I do expect the Blue devils to attack our secondary and move the football at times. That is what they do and they will try and stretch our defenders. Duke has two offensive minds that can dial up a good game playcalling-wise, so Clemson has to make constant adjustments to mitigate the Cutcliffe/Roper effect. Duke is not, however, unstoppable. Florida State pretty much put them in their place last week. I don't by any means believe Clemson's defense is as good as the Seminoles but want to point out that the Devils are much better than usual but not necessarily world beaters with the football.

Offensively, we are looking for improvement up front. Clemson looks to be petering out up front, which is unacceptable and an indication of (A) poor depth and (B) lack of conditioning. I'll be watching to see if Dalton Freeman can actually handle being covered up for most of a football game. Tajh should, though, have a field day through the air. I am anticipating Nuk hitting the 1000 yard mark Saturday and expect Sammy Watkins to have another big outing. From what I've seen out of Duke this year, I would also expect the staff to stretch the field with a speedster like Martavis Bryant. Additionally, I want to see Clemson line up and have the ability to run the football. We have gotten zero push the past couple weeks for Ellington, which is unacceptable when you consider the competition.