It is the Big Time Big Dogs' favorite game of the year. Yes, that is right...it is Textile Bowl time! NC State comes into Clemson for a relatively meaningless ACC game for our Tigers but a big game in terms of program progression. With a win Saturday, the Tigers will hit the 10 win mark for the second consecutive season. Clemson could also cap a regular season in which the Tigers do not lose a game in which they were the definite favorite. On top of all this, this is the freaking Textile Bowl...who doesn't get excited about the Textile Bowl?

Here is the basic game information courtesy of the CUAD: 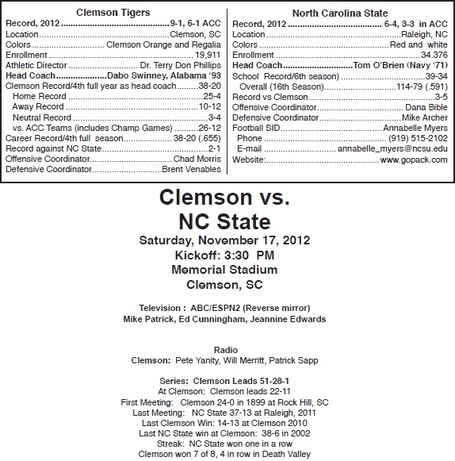 NCST comes into this contest with a 6-4 overall record. I would not sleep on them just because their record says they are just above mediocre on the season. The Wolfback whipped Clemson's ass last season in Raleigh and will do the same if Clemson simply goes through the motions and plays with the same apparent lackadaisical effort we saw against Maryland.

The Wolfpack are led by Tom O'Brien. Coach O'Brien a graduate of the Naval Academy and achieved the rank of Major in the Marine Corps. This military background surely set the path for his coaching style, as shown specifically through his teams at Boston College. O'Brien was a coach at Navy then the offensive line/offensive coordinator at Virginia prior to accepting the head job at Boston College in 1997. O'Brien was successful at BC, first tying for 1st in the Big East (2004) then winning the Atlantic Division of the ACC the following year. O'Brien left BC following the 2006 campaign to take over as the main man at NCST. His time in Raleigh includes a nine win season in '10 and an 8-5 season last year (including a Tire Bowl victory). As mentioned earlier, they are 6-4 (3-3 in ACC play) coming into this game. Overall, I believe NC State fans expected better results after his hire--though the Pack have been competitive and respectable the past couple seasons.

Dana Bible is the offensive coordinator for the Wolfpack. Bible is a tough guy who, in addition to his football expertise, defeated cancer several years ago. Bible is experienced in the game at all levels (including a stint as the Phil. Eagles' OC) and has found success at all levels of football. The Pack struggled post Russell Wilson last season but have regained their passing game fire power under Bible's playcalling/quarterback coaching and senior Mike Glennon's throwing on the field.

Former LSU Head football coach Mike Archer makes the defensive calls. Archer was the head coach at LSU in the late '80's, following Bill Arnsparger's rebuild of the program. His team took a share of the SEC championship in '88. Archer has a nice resume, coaching at Virginia, Kentucky, and with the Pittsburgh Steelers before coming to NC State. I'll note that he has coached on that side of the ball exclusively since leaving Louisiana State.

Archer's philosophy is similar to John Chavis or Vic Koenning, in that he plays a lot of 4-2-5 with 4-3 personnel and he likes to play a softer C2/C3 zone, a similar zone look that we've seen out of Boston College in the past. He will, though, blitz more than Chavis or Koenning. They will bring their backers in strategic spots, specifically on fire zone blitzes. We do expect to see them show "traditional nickel" (i.e. sub in the fifth DB) because the extra defensive back will be necessary against this Clemson offense--per usual for our opponents this season.

The basic stats (courtesy of ESPN) for both teams to date are the following: 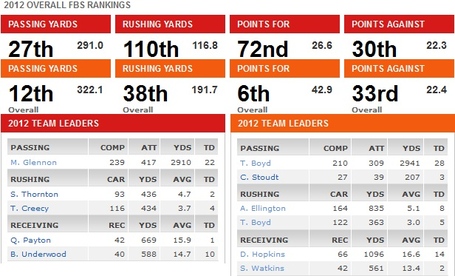 Mike Glennon and this passing attack are items that should immediately grab Brent Venables' attention. Glennon to date has nearly 3000 yards passing on the year with 22 touchdowns. He is a savvy quarterback who will make you pay for mistakes in the secondary which should concern all Clemson fans. One item that becomes obvious early is Glennon's size--6'6", 232 lbs. Such a frame sets up well for a pocket passer as he is able to see the entire football field well. Along those same lines, Glennon is not the most fleet-footed quarterback. Long and short, he can make defenses pay with his arm and make NCST pay with his legs. As we said after the first time we saw him, Glennon is a good player. He just doesn't have the strongest supporting cast.

NC State spreads the ball around well. They have six players with over 200 yards receiving on the year. Their main target is Quintin Payton who leads the team with 42 grabs for 670 yards so far. Sophomore Bryan Underwood has 40 catches for just under 600 yards and a very impressive 10 touchdown catches coming into the Clemson game.

One big reason for the prolific passing numbers is the ineffectiveness the Pack has shown running the football. As a team, the Wolfpack have run for less than 1200 yards through 10 games. Freshman Shadrach Thornton is their leading rusher and the lone back on this team with a ypc line greater than 4. He does have two 100 yard games this season, though those contests were against The Citadel and the Salem Demon Deacons. In all fairness to Thornton, his 436 yards come in spite of not playing in State's first three football games.

Defensively, NCST has a very capable line and largely considered their secondary to be the strength of this defense coming into the year. I do, however, have a tough time looking past the Miami and Tennessee games when trying to assess their secondary, though. Tennessee is the real deal throwing the football and the Vols have a host of receivers that, along with Tyler Bray, put up big numbers each week. I think that Clemson's receivers are some of the best in America and surely believe that guys like Nuk and Sammy along with an emerging Martavis Bryant can torch this NC State defense--especially if Tajh keeps playing well and the guys up front provide adequate protection. The combination of all the items above make you believe that Clemson could very well struggle again running the ball but could create more than a handful of huge plays in the passing game.

Looking back on NCST's season, you see a ton of variance week to week. One week they are getting smoked, the next they roll. I hope we get the former out of them Saturday but would like to see our team challenged some prior to next week's contest. After the embarrassment suffered last season at their place, I really hope Dabo and company will not take this game lightly as there is still a lot for the Tigers to play for and we need this win to avoid marring what has been successful and--thus far--a year that has avoided the dreaded let down game.

Overall, Clemson should should be able to cap off a perfect ACC home schedule. NC State is a good but not great football team that will get theirs using the forward pass. Likewise, our Tigers will generate impressive numbers through the air. We really would like to see some evidence of a sustained Clemson running attack Saturday and obviously want to see how much our defense has progressed over the past couple weeks. This is probably the best offense Clemson has had to defend since Florida State and definitely the best passing attack. We expect Clemson to shut down the run given the Wolfpack's performance in this area this year.