This past Saturday's game against Maryland was more of a late season scrimmage than a game against a division rival. The outcome was never in doubt from the very beginning and the Tigers dominated on the scoreboard and in most statistical categories.

Share All sharing options for: Statistical Comparison--Clemson vs. Maryland Edition

So, instead of discussing that game, the focus will be more on the upcoming game against the Wolfpack from NC State. The standard categories that have been tracked all year against a set of expectations is included at the bottom of the post. 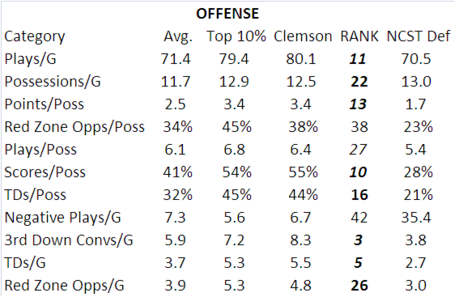 The above table has some advanced stats that look at how the Clemson offense has performed on a per possession basis--a measure of efficiency. Key stats are Points per Possession and scores per possession. These are also two areas where the NC State defense ranks pretty high. The Wolfpack defense is going to provide a much tougher challenge this week than what the Chad Morris led Clemson offense has faced over the past few weeks. However, the weakness in the NC State defense so far this year has been in the secondary, which presents an opportunity for Tajh Boyd, DeAndre Hopkins and Sammy Watkins to have another big performance. The Wolfpack ranks 97th in the nation in passing yards allowed per game (for comparison purposes, Wake ranks 100th and Duke ranks 102nd).

Another key area on Saturday will be 3rd downs. Look no further than 3rd down conversion success for proof that Tajh Boyd has grown tremendously as the leader of this offense. In 2011, the Tigers ranked 35th in the nation with a 43% conversion rate and making over 6 conversions per game. This year, the Tigers are converting at over 50%, ranked 3rd in the country and converting on 8+ third downs per game. However, NC State is allowing less than 4 conversions per game. This is key in most games, but especially on Saturday as something has to give. The Tigers rank 3rd in the country in conversion success and the Wolfpack Defense ranks 3rd on defense. 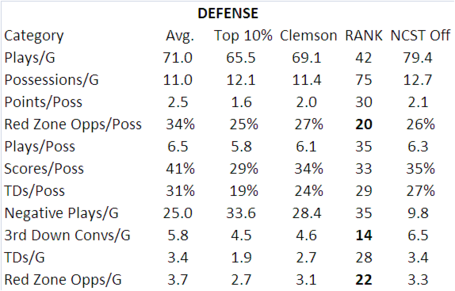 Stop me if you've heard this before in one of these articles...the Tigers defense has performed at a fairly high level against opponents on 3rd downs as well as holding opponents out of the Red Zone. The Wolfpack score about 2.1 points per possession and the Tigers are allowing around 2 points per possession. State scores on about 35% of the possessions and the Tigers allow points to be scored on 34% of the time. A huge key in this game will be the Tigers ability to contain NC State rushing game, which has not been very effective so far this season, ranking 110th nationally at 116 yards per game.

Mike Glennon will likely get his yards against the Clemson secondary (State averages nearly 300 yards passing per game and the Tigers rank 47th in the country in passing yards per game at 220). What the Tigers have to avoid is giving up 5-6 yards per carry and allowing Glennon to throw all day.

NC State ranks 12th in the country in pass attempts (422) and 103rd in interceptions (thrown 13) and 115th in Sacks allowed (3.2 per game). The Tigers defense needs to pick off a couple of passes and get 3-4 sacks to keep Glennon and company in check. If he stays clean and doesn't throw any picks, expect a shootout.

The below tables are the year to date stats for the Clemson offense and defense in comparison to a set of expectations set prior to the season, as we've been tracking all season. 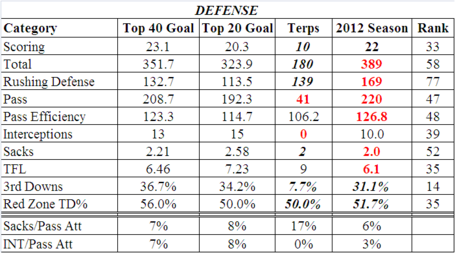 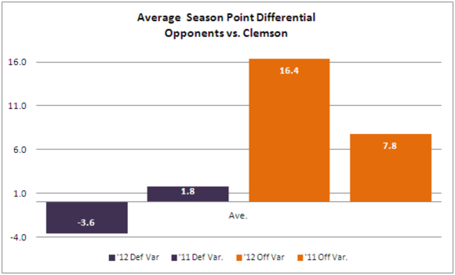