We need to understand how South Carolina will line up and what tendencies we should take presnap from these formations. Here we'll pull the formations and and discuss the tendencies derived from these.

The South Carolina offense will show a wide array of offensive formations. You will see standard three and four wide receiver gun sets, some Pistol, I formation, power gun sets, Ace formation (both under center and via direct snap), and gun empty back sets-just to name a few. Pay attention to the formation as, like all offenses, the formation design helps drive the ultimate play call. None of these formations should be new to you. Here is a sampling of what the Tigers can expect to see in a couple weeks: 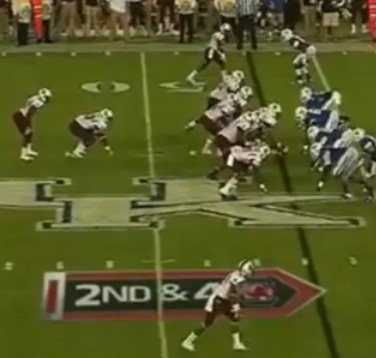 This is the formation that South Carolina has defaulted back to over the past couple season when they could get nothing going and just wanted to run the football. Marcus Lattimore seemed most comfortable here having a defined lead blocker. I assume Kenny Miles has the same opinion as well. Carolina likes this formation when they are committed to running the football, but Spurrier's background is heavy with the use of the I-formation, dating all the way back to Duke. He just shifted away more at Florida and initially at SC. There are several base isolation and power plays they run out of this set, that they were running really well with Marcus. Conner Shaw also looks comfortable executing play action from these looks--likely because opponents think run first when they see this look.

One interesting thing about SCar's use of this formation is that the offensive linemen are not always in a typical three point stance. Notice above, only the TE has his hand on the ground. Clemson will probably play this with Under. 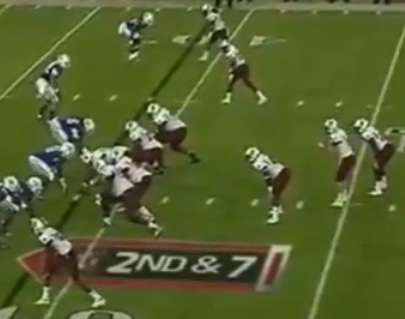 South Carolina also is very comfortable out of the gun staggering the depth of their two running backs. It is pretty obvious that the upback naturally sets up well as a lead blocker. Being closer to the LOS than the more traditional split back sets you see out of the gun, the angles, blocks, and distance in relation to defenders makes this a very versatile set--very similar to a lot of teams' use of the wing/H-back or zip motion into the backfield at the snap of the football. For a more "power" set, insert a TE into this formation.

A variation of this formation can be seen below with Scar bringing in a TE on the deep back side. South Carolina likes to get the receiver deep, tight end on a hook, and flair the back out. Moving the TE to the other side of the formation gives Carolina a TE and upback on one side of the formation...this sets up nicely for many, many base rushing plays. 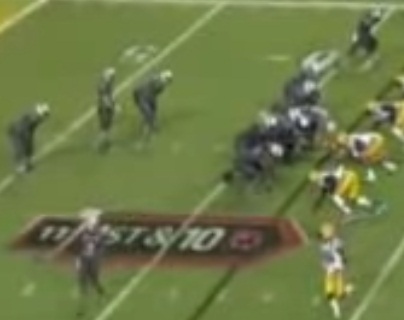 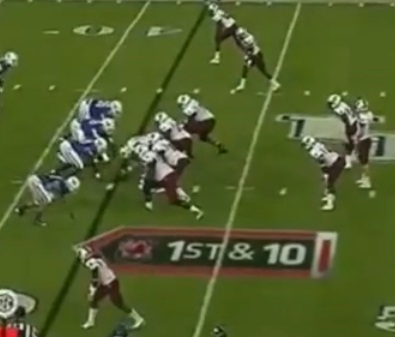 We will discuss this in more depth, but something that South Carolina loves to do is throw the ball to their running backs out of the backfield. Utilizing a two back set allows Carolina to put their backs into play in the flats, on angle routes, or on wheel routes. Rewatch one of their games this season and you will be amazed at their dependency on back out completions.

It also tends to keep the defense even and honest, as you don't know who is getting the ball. In a staggered set, usually the rearward back gets it. Here, since the ZR/IZ and OZ are run across the ball, you never know (by formation) who is getting it. Obviously they'll have some tendencies towards giving it to Davis or Miles however. 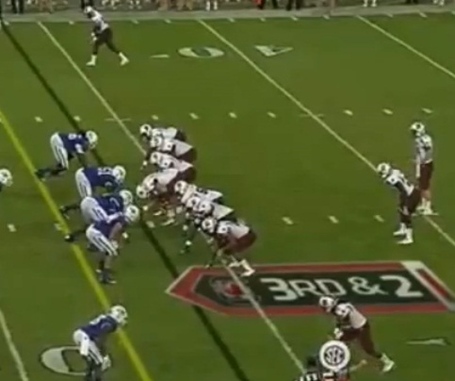 This is a nice little formation that Carolina uses to put an extra player in the box. The obvious advantages here include max pass protection options and more flexibility running out of the gun. South Carolina has been committed to throwing the ball to their TEs on relatively short routes, so that is another obvious option here as well. This is Ace Tight or Jayhawk out of a direct snap. We could see Clemson either going to Nickel or playing this with an Overshift/Slide front. Because of the upstep of the RB, its likely he'll come across the ball. 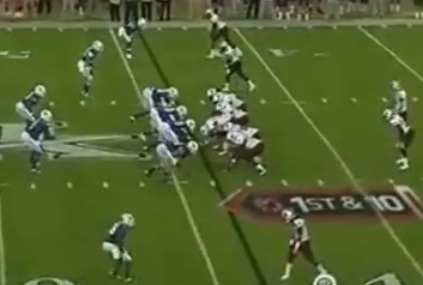 This is a standard formation seen all over the country week in and out. Here Scar places the TE on the twins side of the formation. This is a strategic decision and will force the defense to drop another player into the box, shade an ILB, or maintain a two high look and play zone/potentially give the TE room to work. Depending on how it is played, a rushing advantage, receiver advantage, or TE advantage will be present and it is up to the signal caller to make the proper read to exploit the defense. 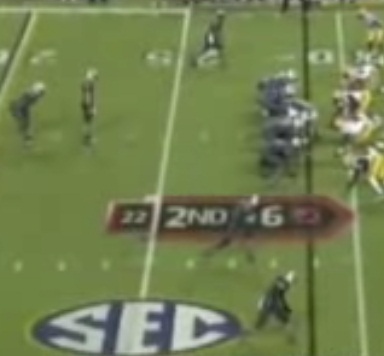 Everyone should be familiar with this formation. Clemson along with many other college and pro teams have used this Nevada product over the years. We've discussed this formation extensively so you should be more than aware of the rushing and passing advantages created from this look

I'll note that Scar will run variations of these formations by substituting in receivers for TEs and vice versa. Carolina will also put Shaw under center with more than the I look, typically in one back ACE sets or a one back two TE look. They are not afraid to use the gun deep in an opponent's territory and have been successful handing the ball to the back here at times this year. Conner Shaw's running abilities leave the QB designed runs (a la single wing) as well as draws on the table when threatening to score.

How to Beat Scar