Figure 1 and Table I both show an average of offensive players, defensive players, and specialist listed on the two-deep roster. Tables II through IV show the two-deep roster used for analysis along with the recruiting ratings for each player on the roster. Clemson is ahead of NC State in all areas. They are over a quarter of a star per player better on offense, over 0.8 stars per player on defense, and 0.4 stars per player better on special teams. Overall, the Tigers are half a star per player overall better than the Wolfpack overall...Once again, the high school talent scouts favor Clemson over an opponent. 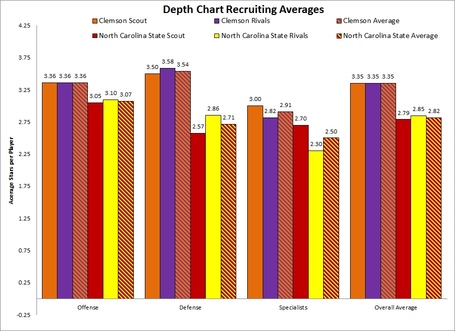