The Georgia Tech Yellow Jackets roll into Death Valley this week to cap off the first half of this year's Clemson regular football season. Georgia Tech has been an annual thorn in Clemson's side for many years now. Paul Johnson and his style of play have made it tough on our Tigers the past half-decade or so. We'll get into the details in a bit, but first let's set the background and general game information.

Georgia Tech is, of course, led by Paul Johnson. Johnson also serves as the Yellow Jackets' offensive coordinator. Johnson gained national recognition as head coach of two schools, Georgia Southern and Navy, before taking over the Georgia Tech program. Under Johnson's guidance GA Southern won two D1-AA championships ('99 & '00) and was the championship runner up once ('98). Johnson was also the offensive coordinator for two other D1-AA championships at Southern in '85 and '86 under the great Erk Russell.

Johson's bread and butter is his ability to have his team line up and run a relatively limited offense very well. He emphasizes the importance of precision implementation and perfection of a couple basic ideas. He makes slight adjustments based on what the opposition gives him to eat the opposition alive with a very potent option attack. He'll kill you with the dive. When you commit to the dive, his QB will pull the ball and make you pay there as well. Shift you line to better take away the dive, then outside veer, and he hits you with the midline. There are several counters, sweeps, and such they will run, but basically the offense is so simple that Paul Johnson barks out plays either from memory or from a small notecard based on the front Clemson shows them. Maybe if they are really in trouble or Johnson is not thinking properly (as seen in the '10 game at Clemson), Georgia Tech will throw the football. GT has attempted 75 passes this season in five games, you do the math.

The gameplan for Clemson is simple...play good fundamental, assignment football to stop the GT rushing attack. Also, anytime the GT quarterback gives an option look (even if they run the dive and he is just running his track without the ball), the Tiger defense has to put him on his ass. Hit the QB and hit him as often as possible. It sounds brutal but is perfectly legal and an really the only way to get the opposing signal caller to start thinking too much. They want to run the dive and if we cannot stop the dive, Clemson is going to give up a boatload of yardage. If you stop the dive, then you'll see a steady dose of the QB pulling the ball and running the option. Against a 3-technique, you'll see midline. If CU puts their DTs at the 2, they'll try and option the end. They may also widen the splits to again hit with the midline. GT also likes running a little sweep play and will not hesitate to go to that one even in short yardage situations.

Basically, we don't know exactly what Brent Venables will show them schemewise. He faced the Air Force triple option before and we havent seen that tape. We expect a 4 man front, and either 4 across or a single high safety with M2M on the outside. That is usually what you're forced to do against the option. it is then crucial that DBs get off the damn stalk blocks and the safeties evade the crackback.

We also want to reiterate what we said last year about "solving" the option. There is no such thing as a "solution" or magic defensive scheme that beats it. Miami has basically shown them the same scheme for 3 years and Steele ran the same thing (other than the 2009 ACCCG, where he lost his mind). You just have to be very disciplined and very physical up front. You have to get your hands on the head of the cut blocker and push him to the ground before he can take you out. Anyone on the perimeter must do HIS job and not think about anyone else's job.

And we don't want to hear a bunch of crying about cut blocking. Its not illegal, its not dirty, and Clemson does do it, just not on every play. It doesn't break legs, and in fact we can't recall anyone who was seriously injured by one of GTs cut blocks. It just bruises the hell out of you and slows you down. This is football, so no crying about cut blocks.

Johnson is flanked on the other side of the ball by The Chessmaster, Al Groh. You'll probably recall Groh as the former Virginia coach who proclaimed himself the smartest man in college football then went down in flames in Charlottesville. Al has been coaching at all levels since the late ‘60's and has plenty of college and professional coaching experience. Groh, who played footaball and graduated from UVa, was the head coach at Wake in the early ‘80's (including the 82-24 beatdown to the hands of our Tigers back in '81, so you'd think he would know better than proclaim himself a genius), followed Bill Parcells around for quite a while, became the Jets head man for a year, then took over the head job at Virginia. Groh ended up in Atlanta after getting the pink slip from his Alma Mater in 2009.

Groh is a "3-4" guy. Groh's 3-4 system is the basic one that has survived from the 1980s. It's two-gapped Okie and requires a NG that can absorb a double-team. STS put together an insightful piece on 3-4 basics over the summer. Remember to pay attention to specifics on the two-gap scheme and not the single gapper Bum's Son used at Dallas. So far as personnel groupings, Georgia Tech will have to bring at least another defensive back to cover Clemson's spread formations. Thus, the grouping will for the most part be a 3-3-5 though with the way they use their Jack LB, will essentially look like a 4-2-5. In some ways you could compare it to what we showed FSU.

Groh also likes to zone blitz. By necessity, teams that play with three defensive linemen have to bring a linebacker or defensive back. Al Groh is no different and will bring at least one player on every play. Along those same lines, you'll notice he likes to walk his Jack LB up, essentially creating a four man front. If you don't see Jack walked up, keep your head on a swivel because someone will surely be blitzing-it is just a matter of where he is coming from. Outside the front three, Groh will bring as many as three extra defenders to get after the quarterback. He was aggressive against Clemson last season and likely will do the same again this season. He brought pressure from all over the place and dared Clemson/Tajh Boyd to beat his defense. Georgia Tech mitigated Clemson's receivers last season using jamming techniques. After seeing FSU successfully implement this tactic, I see no reason to think GT will not attempt the same. Another thing you probably noticed last year was his use of the two-high safety looks. Groh was no dummy and respected the speed Clemson brought to Atlanta at the WR position. He also knows that a missed jam is a sure touchdown with no help over the top. Since I assume our receivers will get the piss jammed out of them, I'll also assume that GT will keep two safeties 10-15 yards off the LOS. It should go without saying, but this allows the Jackets to play a lot of two deep zone, which they will. Also expect some man with safety help and C4.

Here are a few still shots of what we expect to see out of Georgia Tech pre-snap. Notice the linebacker walked up and the two deep safeties in each clip. 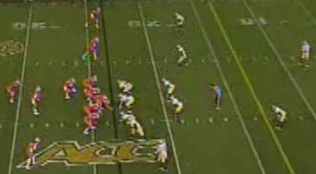 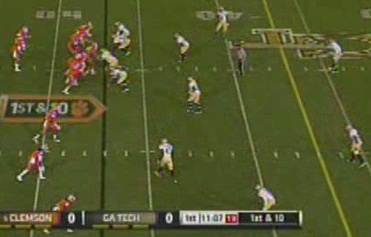 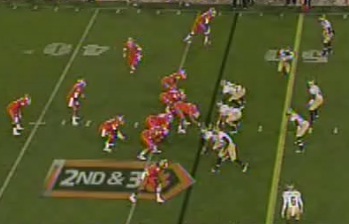 The general statistics can be seen below (thanks to www.espn.com): 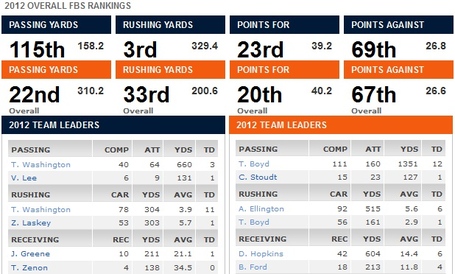 Not very often do we play a team where the leading passer is also the leading rusher (though, only once a year do we see the flexbone as well). Tevin Washington has 78 carries for 304 yards and 11 touchdowns rushing and 40/64 for 660 yards with 3 TDs and 2 INTs through the air on the season.

I really can't say much good about GT otherwise. You can read the numbers up front. Their defense is garbage. The only chance they have is to convert 3rd and 4th downs. Clemson is vastly superior and if they can make GT punt, it could get out of control early. If, though, Clemson cannot play proper defense against a team that got rolled against MTSU last week (and MTSU embarrassed them, no doubt) we are in big trouble. We should all start cussing profusely if we cannot just beat the shit out of GT. Outside of their scheme (and the background their coaches have) GT sucks and should get beaten handily in Death Valley.