After 8 games, we have a pretty good idea where the Clemson offensive and defensive units stand as far as production and efficiency. We’ve seen many of the same trends from the first few games to now on both sides of the ball—at least for the most part.

Chad Morris’ unit continues to have an incredible year in terms of overall production—the Tigers offense scored more than 40 for the 5th time in 8 games Thursday…nearly hitting that mark by halftime. Two issues continue to hold the offense back a bit, though. Sacks and the running game, both of which are offensive line related. We all knew the OL would likely be the weak link on the offense this season, but were pleasantly surprised in the Georgia Dome against Auburn and started thinking they had were going to exceed expectations. Alas, turns out, Auburn’s defense is awful, ranking 109th in the nation in rushing yards allowed.

Even more discouraging, is that against Wake Forest, the 101 rushing yards was 80 yards below what the Deacs were giving up per game prior to Thursday night. For the second straight game, Tajh Boyd ended with more rushing attempts than Andre Ellington, which should not be happening. That is not necessarily a critique aimed at the number of carries that Tajh is getting, per se. For the most part, only about half of those carries are called runs, but more the concern is that this offense is not feeding Andre the ball enough. He averaged over 4 yards a carry Thursday night (with a long run of 12 yards, the average is not skewed), so he was not completely ineffective. You could argue, why risk getting him hurt when up 35-7 and I would agree with that…but the backups only had 9 carries combined.

As far as the sacks allowed—ranking 81st is an issue especially with 8 sacks in the past 2 games. You could make the argument that part of that number is driven by attempts and that is true to a small degree—if you look at sacks per pass attempt, the Tigers rank 71st at 6% of pass attempts resulting in a sack. In spite of those struggles up front, the offense, with all the weapons available, has been nearly unstoppable for most of the season and especially in the second quarter Thursday night when 28 points were scored. It may have been the best series of drives so far this season—those 4 drives accounted for 339 yards on 22 plays (15 yards per play).

As important as any other stat listed above is the #9 national ranking in turnovers lost—only 8 on the season so far. If this unit can continue to hold onto the ball, 40+ points are likely to happen most of the rest of the way and that gives this team at least a fighting chance to win the rest of their ballgames. 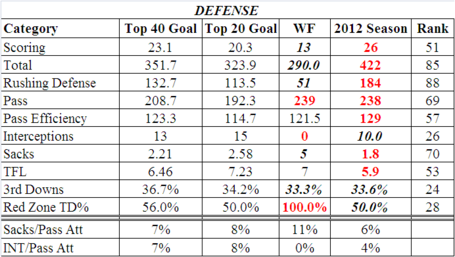 Brent Venables’ crew looked much better on Thursday night—while Wake is one of the weaker offenses the Tiger’s have faced this season, the defense did what they needed to do. Right from the beginning they played with some attitude that had not been seen so far this year. As I mentioned in the pre-game article last week—despite the struggles so far this season, Thursday night was a game where the Tigers D was far more talented than the opponents’ offense and they need to go out and prove it. They did just that, holding Wake to under 300 yards of offense and 13 points and have now held opponents below their scoring average in three consecutive games.

They were bailed out by some wildly inaccurate throws and conservative play calling at times. After a strong sophomore season, Tanner Price’s stats have regressed back to those from his freshman season (52.6% completion rate and 113.4 rating on the season). Only one turnover was forced and no interceptions, but there were a bunch of TFL’s and 5 sacks on the game. Again, competition had much to do with the performance, but the players seemed to be playing faster, more aggressively and hitting harder for most of the night. This must continue along with the trend of holding opponents under their scoring average for the rest of the season.

Looking at the year to date stats, the 2 bright spots continue to be the same—getting off the field on 3rd down and keeping teams out of the end zone on drives that make it inside the 20. An interesting add on stat, is that the defense also ranks high in opponent 4th down conversion rate (13th ranking and 26% conversion rate). On both sides of the ball, 4th down has been key for the Tigers, stopping opponents nearly 3 out of 4 tries and converting on offense on 7 of 8 attempts so far this season (3rd best conversion rate and 44th in terms of the number of conversions).

Last week, I showed the below table for the first time. It’s been updated to include the rankings through week 9 of the college football season and with new predictions for the last few weeks. You’ll see one major shift…last week the model was predicting a 10 points loss to South Carolina, but this week that gap has closed entirely. Prediction is now a 32-32 tie, but if you go out to 1 decimal it’s a .3 points Tiger victory.

I posted this stat Thursday night in the game thread, but thought I’d show the updated data through 8 games. Look at the second quarter output of the offense! Over 40% of all the points that have been scored and 165% differential compared to opponents--a plus 11 points per game.

The defense has been fairly even, although it great to see that the 4th quarter is the lowest number again this year. In 2011, the offense scored the largest proportion of points in the 3rd quarter (32%), which has been the least productive quarter so far in 2012.

I’d be lying if I could point to the reason or the logic behind these numbers and especially the shift in comparison to 2011, but I find it very interesting. Part of the second half drop off may to do with having halftime leads in most games in 2012 and changing the focus of the offense a bit, whereas last year, the Tigers trailed at the half often and the offense needed to come out and put points on the board. 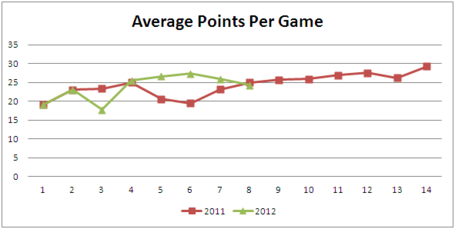 This shows the average points per game allowed by the defense in 2011 and 2012--it's a moving average week by week, so starts with the 19 points allowed and then averages in the new total week by week. Clearly, this season, over the past 2 games that average has started to come down, compared to last year where that average started steadily climbing from game 6 and beyond. Going out on a limb here, but if that green line follows the red line from here on out, expect a couple more losses. If it flattens or continues the downward trend from here to January, a BCS bowl appearance is certainly a strong possibility.