Clemson rolls into Winston-Salem for a Thursday Night contest. Clemson has historically struggled on ESPN Thursday night games and has had a 1-9 record in such games since 1998. In fact, Clemson's last Thursday night loss at Wake was ultimately the final issue that got Tom Bowden fired.

The basic game information (courtesy of the CUAD): 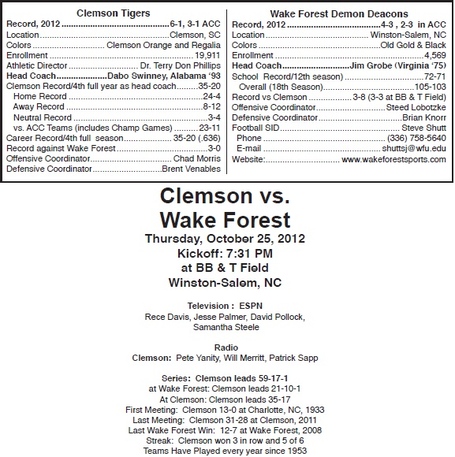 Wake Forest is led by Jim Grobe. Grobe is a 1974 Virginia graduate and got his start as a grad assistant at his Alma Mater. He moved around for a couple of years coaching linebackers at Marshall then at Air Force. Grobe stayed at Air Force for 11 seasons before landing a head coaching job at Ohio University where was the head man at Ohio from ‘95 to '00. At that time Coach Grobe left to take the Wake Forest job. Grobe built the Demon Deacons in a methodical fashion, eventually reaching the apex of his career to date in 2006. The ‘06 season saw Wake win 11 contests, an ACC crown, and the Deacons play in the Orange Bowl to culminate the season. This achievement should not be discounted as the growth of this program was incredible considering the state of WF's program when Grobe took over.

Jim Grobe is known by most college football fans as a coach who demands fundamental perfection and one who is able to get the most out of his players. I'll reiterate what was said above: Anyone who can win in Winston-Salem is, by default, a very good football coach who rallies his team to overachieve. Offensively, Grobe implemented lots of misdirection and cut blocking early in his tenure at Wake. Since, the Deacons have morphed into more of a "conventional" offense featuring basic spread and pro-style formations. I'll also point out that Grobe's initial offenses gave Clemson fits but our Tigers look much more comfortable playing against the pro/spread looks we've seen in recent years.

Steed Lobotzke was a player and grad assistant at the Air Force then joined Grobe' staff at Ohio in ‘97 after fulfilling a tour of duty in the military. Lobotzke followed JG to Wake, eventually becoming Wake's offensive coordinator in 2003 when Troy Calhoun left for the Denver Broncos. Clearly Lobotzke was around and was a critical part of the development and implementation of Wake's ACC Championship winning offense. Since, Lobotzke has taken a different philosophy with his offense, showing more "conventional" looks in his attack. We will see some pro-style sets, spread-type shotgun looks, and also some plays from the pistol. Long and short, forget most of the views you may have formed of the WF offense during the mid-00's.

Brian Knorr is WFU's defensive coordinator. He was promoted to co-defensive coordinator last season and runs the show there these days. Knorr and Jim Grobe have coached together for 12 years at three (3) different schools. Knorr is an Air Force graduate who coached at the academy then moved on to Ohio University where he coached linebackers and was the DC under Jim Grobe. Following Grobe's departure, Knorr was named the head football coach at Ohio--a position he maintained from 2001 to 2004. After giving up the head spot at Ohio, Knorr spent some time at Air Force again before arriving at Wake Forest in 2008.

Wake will feature a base 3-4 and if were them I would show an odd front all night. They have a nose, Nikita Whitlock, who is an undersized player but a guy who's motor is wide open. I suspect Dalton Freeman will get a workout from this young man despite his 5-11, 260 lb frame. They have shown four man fronts, particularly in nickel packages. Note that the four man down lineman front doesn't necessarily ensure an even front. No matter what you hear, though, understand that this WF defense is not all that great and has given up a bunch of points this season, including 27 or more in four out of seven games on the season. Overall, this team gives up 28 points per ballgame which is 75th best in Division 1A. 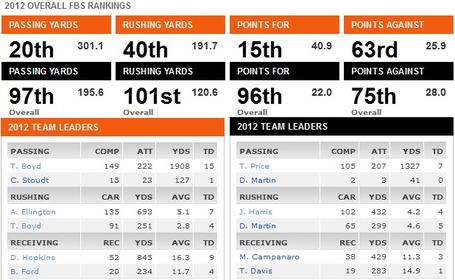 All in all, Wake is not impressive on either side of the football, gaining only 316 ypg on offense (112th best in the NCAA) while giving up 405 ypg on defense (75th in the college game). Offensively, they are led by Tanner Price. The Junior has just 1327 yards through the air to compliment his seven touchdowns on the season. He also posted a career best 320+ yards passing earlier this year against North Carolina. Mike Campanaro is his favorite target, hauling in 38 catches for 429 yards on the season. I should note that Campanaro broke his hand in late September against Duke but Jim Grobe confirmed he would play this Saturday. At the time of his injury, MC was leading the ACC in receptions.

In most football games, I would quickly tell you that the Price/Campanaro combo is scaring no one--though Clemson's secondary has scared me all season and is shorthanded following several injuries. Bashaud Breeland is the big name who will not be present in Winston-Salem when the Tigers take the field Thursday night. When the Deacons attempt to move the football on the ground, they will look to Junior Josh Harris. Harris has 432 yards on the season, with his best showing a 12 carry, 129 yard, two touchdown game against Army.

Defensively, we discussed Wake's base 3 d-line set. They will mix up pressure schemes as most 3-4 teams do. You will see a variety of blitz packages off the edge and through the interior. Wake also likes to drop eight at times to force the opposition to methodically move the football an not hit the homerun. They are overall undersized and out-talented against the Clemson offense and, despite their best efforts, Clemson should be able to rip off some big gains running the football and through short/medium passes that set up the Clemson players to show their superior athleticism.

Clemson is clearly the better overall football team. However, history is not on Clemson's side as the Tigers are 1-9 on ESPN's Thursday night football since '98. Additionally, Clemson is coming off a short week in an atmosphere that is, well, lacking compared to the home confines of Death Valley. I believe their largest home crowd this season was a touch over 30,000 so you hope that Clemson doesn't get lulled to sleep by the missing fan noise and crowd interaction. Also, this is a big chance for Wake on a featured ESPN game. You would suspect this one has been a game these guys have been looking forward to for quite some time because of (A) Thursday night showcase and (B) national television hosting the #14 team in the land. These things being said, Wake is a bad football team and will need help from our Tigers to pull off the upset. We expect to see an improved offense this week that avoids sleepwalking through this game.