The Hokies roll into Clemson's Death Valley for a high noon battle. The fortunes of these two teams appear to be headed in opposite directions since before the ACC Championship Game. This has been an odd first half for a VPI team that the rest of the country believed would easily be the class of the ACC.

First and foremost, the basic information surrounding this game can be seen below courtesy of the CUAD. 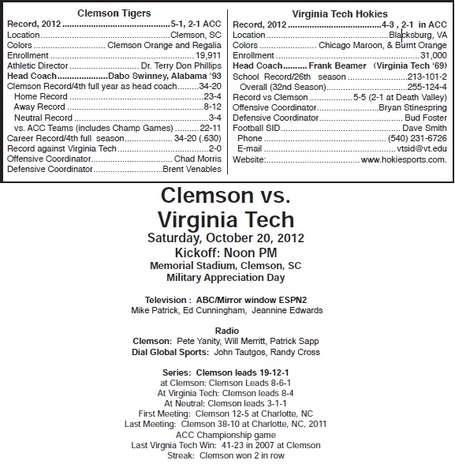 Virginia Tech brings a lot of questions into this football game. Heading into the 2012 campaign, we all assumed that the Virginia Tech defense that we have all become accustomed to would be its usual dominating self again this year and that the offense, led by a highly thought of returning quarterback, would give VPI a chance at a big run. It hasn't turned out that way, in fact its been a disaster so far.

We'll give you a little coaching staff background then dive into the upcoming game. We have been through the specifics of this VPI staff a couple times before. There has been little turnover lately and, because of this, we'll give you the skinny on the staff again but do reference you back to this previous article that looks at this staff.

Frank Beamer is the head man and he has been at VPI for what seems like forever. He is a coach who has won a ton of football games playing good defense and dominating the opposition in special teams play. The Hokies have traditionally scored quite a few points through their punt/return teams and through their defensive efforts. Virginia Tech's success based on these two areas has, over the years, been affectionately coined as "Beamerball." Over the last few seasons, we think the dropoff in talent across the board has lowered the talent level of what was formerly an outstanding team on ST, and it has not been so much Beamerball anymore.

Frank Beamer has a reputation for appealing to his assistants and has been able to keep his core staff intact for many seasons. It is one of their main recruiting pitches. Offensive Coordinator Bryan Stinespring came to Virginia Tech as a graduate assistant in 1990 and has been at VPI ever since. Defensive Coordinator Bud Foster has been with Frank Beamer since his graduate assistant role at Murray State in 1981. Foster followed Beamer to Blacksburg in '87 and was promoted to defensive coordinator in the mid-‘90's. These two coordinators have a half a century's worth of experience with Beamer in some capacity. Additionally, Mike O'Cain has been a part of this staff since '06 and currently serves as the Hokies effective co-offensive coordinator.

Bryan Stinespring owns the title of offensive coordinator at Virginia Tech and has been in this capacity since the 2001 Gator Bowl. Former Clemson QB, QB's coach, and offensive coordinator Mike O'Cain, however, is the team's playcaller. I believe Stinespring was anointed the non-playcalling OC so that Beamer would not have to demote him, but it came after one of their better offensive seasons in recent memory. It is an interesting situation to say the least. Last season many folks believed that the team responded positively to Stinespring being on the field to inject energy and do more face to face coaching with his linemen. For some reason in '12, Stinespring decided to move back into the pressbox and it really doesn't appear to be working.

Last season there was talk of Clemson stealing signals from VT, but it seems to have been debunked. We know from the film reviews that this is a definite O'Cain-called offense: they can't figure out a defense and they're predictable as hell. Its possible they tipped some plays but this happens and it can be found on film study, and if it did happen VT should've found it themselves through self-scouting.

In 2011, the Tigers went into Lane Stadium and shutdown Logan Thomas, who was quite obviously hampered by O'Cain's calls. If you can get 5-6 yards per carry with David Wilson, why ever take him out? VT never stuck with the run, and when Wilson fumbled they substituted him out for a long stretch. If he plays as much as I would've played him, VT probably scores twice more in the game. Clemson had no answer for Wilson in the first game. Clemson had every answer for VT in the 2nd game.

Everyone knows of VPI's defensive coordinator Bud Foster. Foster is an excellent football coach and annually is seen as a top candidate for a head coaching gig or two at a relevant school/university. We've discussed it before, but here is the quick and dirty:

Foster and Virginia Tech popularized the single high 4-4 "G" in the ‘90's. This defense featured a multitude of blitzes to mitigate the QB's effectiveness and provided a base eight-man front for run support purposes. You'll also recall Va Tech's use of "2 Robber" for both pass and run stopping capabilities. We discussed the "Robber" concept here before, so I'll point you in that direction instead of breaking it down here. Va Tech was unique in their defensive back arrangements. Tech positioned their corners deeper (often in man or with the corners effectively playing the deep men in a two-deep look) and pushed the "Robber" safety closer to the LOS where he was able to look into the offensive backfield and to provide great run support (and essentially a nine-man front) when the opposition ran the football. This defense was extremely successful against two-back sets. 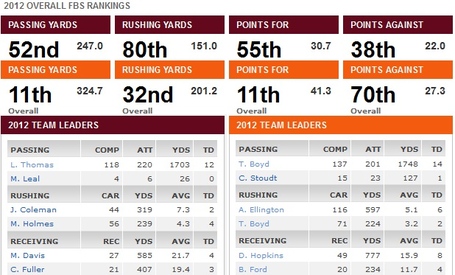 When VPI has the football, Clemson will be concerned with the Hokies' star QB, Logan Thomas. The Junior came into this season with ridiculous hype which, combined with Tech's overall team struggles and lack of rushing threats so far this season, has dampened enthusiasm regarding his 1700+ yards passing through seven football games. Thomas is arguably most dangerous with his legs. If Clemson cannot maintain containment and lets him get into space he will make the Tigers pay dearly on Saturday.

Thomas' favorite receivers are Marcus Davis, Corey Fuller, and Dyrell Roberts. Each of these guys has 20 or more receptions on the season and Davis leads the group with 585 receiving yards and four touchdowns. VPI has been very unsuccessful running the ball this season, producing less than 1060 yards on the ground total this year. QB Logan Thomas has 200 of those yards on 71 carries.

Rushing leader, freshman J.C. Coleman does have 300+ yards on just 44 caries for a sporty 7.9 yard average per carry. Those numbers are a little odd, though, as Coleman had 13 carries for 183 yards and both his season's TDs last week against Duke. Further, 87 of those yards came on one long TD run (of note, he also had a 45 yard scamper against Duke as well). His previous season high for carries/yards was 7 carries (Cincinnati) and 45 yards (Bowling Green). I am willing to say that his play was great last week but that is far and away the most action seen all season. It will be interesting to see if VPI continues the runningback rotation it was committed to early on or if Coleman is featured more after last week. Clemson absolutely has to set the edge against this young man. He is a smaller back who has not proven to be a force inside the tackles. However, as we saw against Duke, letting him get outside could be big trouble for the Clemson defense.

Overall, we haven't really been that impressed with Va Tech's offense this season. They lost quite a bit in terms of guys up front and receivers and the replacements have not quite filled those shoes yet. Most disappointing for those used to watching Frank Beamer's teams play football over the years is their inability to run the football. This deficiency forced VPI into less comfortable situations and a lot of passes. The Va Tech fanbase has attributed this playcalling imbalance along with the attrition from last season as the problems behind the Tech offense so far.

Defensively, Va Tech has been a bit of a disappointment as well. With all the talent they had returning, most thought this group would be flat out dominant similar to the great Beamer/Foster defenses of the past. Up front they are chock full of juniors and seniors. The concerns you always hear about this group involve versatility and depth. This is contrary to every thing we heard in the preseason regarding what many VT fans thought was the best defense in school history.

There has been a lot of talk about Tariq Edwards' injury. He has not returned to full strength this season and will not start Saturday against our Tigers. Instead Bruce Taylor and Jack Tyler are projected to get the nods here to begin the contest. Tyler has played well to date and definitely a player I'll be looking for during the time Clemson is on offense. Kyshoen Jarrett is the man playing the Rover/SS position for Bud Foster. We've mentioned before that the guy who plays this critical Rover/SS spot needs to be a great player, and Jarrett is really not to that level in his run pursuit play. Eventually we think he'll be good, but right now this is a big weakness. We also think the LB play is suspect, so VT has gone away from Robber to more M2M coverage and single high safety looks. They're not able to blanked the underneath routes and be as tight on short passes as they were against us in Lane last year. Overall, though, this entire defense should be one that Clemson is able to attack all afternoon both on the ground and through the air.

Overall, this is a game that we should expect Clemson to win. Clemson is an 8 point favorite in Death Valley, though the noon kickoff does our Tigers no favors. Offensively, Clemson has to attack a less than stellar Virginia Tech offense in a balanced fashion. As stated earlier, I believe that the Tigers can both run and pass on this defense but need to do both to make Bud Foster take one away. If we can run the football and VPI is forced to cheat men in the box and play riskier in the secondary. Anything M2M involving Nuk or Sammy is downright dangerous for the opposition.

On defense, we cannot let the freshman RB beat us, particularly on the perimeter. This involves doing a better job setting the edge and keeping the play contained. The same applies to Logan Thomas as well. He will make you pay if you lose track of him. While VPI's receivers are not the best in the league, everyone has given our secondary trouble and I expect the same here--especially considering Clemson's inability to date to get consistent pressure on opposing QBs.

All in all, I am like most and expect a high scoring affair. Clemson has to make Thomas beat them with his arm and cannot allow him or the (so far) ineffective VTech running backs to chew up yardage. I think Clemson will have ample offensive opportunities to gash these guys both on the ground and through the air. Hopefully the Tigers will come out loose and without rust after an off-week. Per Coach Dabo, everyone is healthy and this team should be ready to go to attack the second half of this football season.