Go ahead and get your barf-bag ready. You will see that Clemson has done a piss poor job using redshirts for their highly rated linebacker recruits. What you will see below is that Clemson has not used Tony Steward or Lateek Townsend well at all. It is pretty much Tig, Anthony, and Quan with a sprinkle of Rico and Shuey when the appropriate situations arise. Tony Steward is way to valuable for this crap. Either play him or, if he is injured redshirt him. Anything else is plain stupidity.

The numbers are what they are. We still have not developed the rotation we all thought we needed and we have the most recruited linebacker since Anthony Simmons sitting on the sidelines. The staff has its head up its ass here. Tony Steward isn't a special teams contributor. He is a talent you don't get very often. If the staff was only confident enough to get him in 37 times at linebacker this season, he should have redshirted. Period. We harped on this in August because we foresaw this exact thing happening. Dabo has done a pitiful job with scholarship and roster management.

Here are the snap numbers for individual players following the GT game: 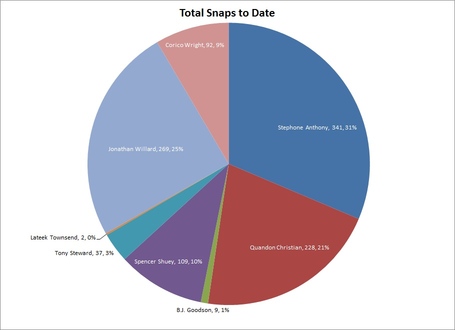 Our linebacker play has sucked to this point. Lets be honest here. You might think they have talent, but they are playing like garbage, and they aren't being helped by the down 4 that much either. I'll give Anthony a little slack, but not much. We have to get better here and we have to get better fast. See the overall snap counts following. We have got to do better with our talent at this position.

Before we move too far into the commentary, we also should show you "efficiency" numbers via the table below. I'll point to several items. First and foremost, the tackes/def. snap column. Keep in mind that the tackle count (Total) also includes Special Teams tackles, which we removed from the tackles/def. snap numbers. Also notice the tackles for loss and sack numbers below. These were surprisingly low in my opinion. I'll also note that Quandon Christian and Stephone Anthony each have an interception on the season.

Stephone Anthony leads with the number of snaps, as he should, at MLB. But you saw, based on how he was always a step late in his reads or how poorly he got off blocks, that he was subbed out in the 2nd half against Georgia Tech for Spencer Shuey. Spencer would play much more if he were faster as DrB has said many times as shown above, he has used his snaps the best out of this group making a tackle roughly 1 out of every 5 snaps he takes. This is compared to Anthony's 15% over this time period. He's usually good on his reads, but he's simply too slow in space to be isolated as a Robber or against any quick player over the middle...and most slot WRs and RBs are going to be quicker. We think Spencer is playing about as much as he should be.

Christian probably had one of the best games of his career against Furman, and did well against BC. Its improvement over last season at least. However, he cannot play the option worth a damn and registers just one tackle/assist per 10 defensive snaps. We may not have played him 52 snaps against GT, he's a liability. Going forward he will probably end up with roughly the same numbers and if he continues to improve, it'll be OK for him...this season.

We could probably say some of the same things about Tig, but at least he's consistent. He just stinks at the cutback discipline. He's not going to make a bunch of plays, so we would sub him out a little more when situations allow it. We think they allow it more often than he's been subbed out.

Goodson is a MLB, and not likely to have grasped the defense after a RS season and being behind two guys means he won't get many snaps yet. Rico is about where he should be as well, because we know what we've got with him and its not good.

Its Teek and Steward's snap counts that are disappointing us. It'll take about 100-150 snaps to make a season worthwhile for a freshman, and if you can't get someone that then they should have the benefit of an extra year of opportunity down the line. They gave it to Goodson, but not to the two most talented players? Either Townsend is not as talented as we've been led to believe or the coaches have dropped the ball here. Steward isn't good enough to warrant 10 snaps a game when they told us his knee was 100%?

Townsend could've redshirted last year, and served his 4 game suspension to start this season, and he'd be in basically the same boat. Steward should've redshirted last year, and possibly threatened to transfer if they had tried. Hell both of them could've threatened to do so. If Dabo can sell cock rings to a convent, he should've sold these two on the little they'll get to play and how much learning/healing needs to be done. If they transfer, they sit anyway. Now, they've possibly lost two good years of college playtime.