We continue assessing our opponents' talent level via two-deep assessment using Rivals/Scout ratings as assessment tool.depth charts for both teams were attained DIRECTLY from the Clemson website (www.clemsontigers.com). A pdf version of this can be found here. I will go ahead and tell you that because of injuries and Monday depth chart adjustments, some items here may be a little out of place but in an effort to maintain consistency, I'll use both teams' depth charts as presented on the official website.

Figure 1 and Table I both show an average of offensive players, defensive players, and specialist listed on the two-deep roster. Tables II through IV show the two-deep roster used for analysis along with the recruiting ratings for each player on the roster. Overall and in each category, Clemson rates higher than VPI on a stars per player basis. Again, Clemson enters the game with higher recruited talent ratings then their opponent. 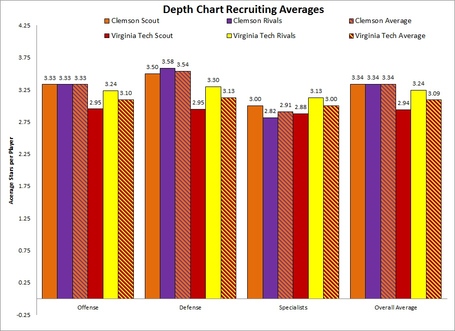