We have repeatedly harped upon the importance of creating depth along the offensive line. It is critical that Clemson develop talent and quality backups for obvious reasons. What you will see below is Clemson is still reliant on 5-6 players in competitive games, though Clemson did try and rep quite a few of the young bucks during blowouts against Furman and Ball State.

First, we need to give credit where credit is due. All statistics described here were attained from the CUAD. We'll begin with the overall season totals then work down to last week's game against Tech. Overall, it appears as though Clemson is spreading the wealth quite well over the course of this season. The table below shows the offensive line participation breakdown by class over the course of this season. 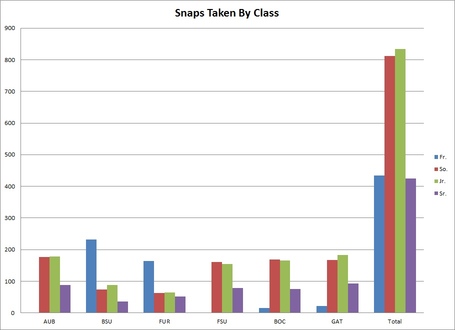 You see a decent overall almost parabolic class to class trend for the total numbers. Freshmen and Dalton Freeman have about equal snaps on the season. Sophomores and Juniors roughly double the snaps by the Freshmen and the Senior. If you look game to game, though, you will notice that outside the BSU and FU games there has been little Freshman participation. This is not particularly alarming (as you would hope you wouldn't have to play Freshmen) but take note that the only two Freshmen the staff seems to have any "real game" confidence in is Ryan Norton and Kalon Davis. Norton has well over 100 snaps on the season and logged 21 last week against GT. Along those lines, individual snap counts are shown below (I apologize in advance for the chart clutter--click to enlarge). 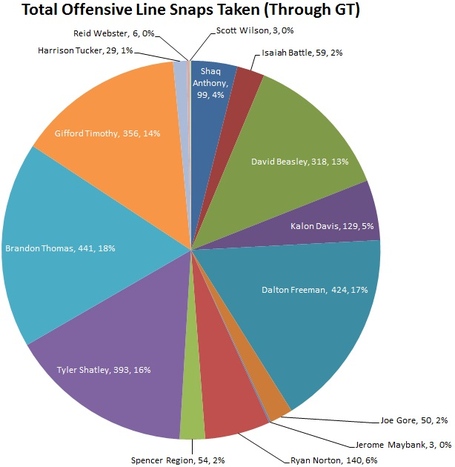 Dalton Freeman is the lone senior, scored all of his class' 424 snaps. Tyler Shatley and Brandon Thomas accounted for the majority of the Juniors' snaps with 393 and 441, respectively. Gifford Timothy (356) and David Beasley (318) lead the Sophomores and Kalon Davis has contributed with 129 so far. Anthony, Battle, and Norton are the main Freshman contributors, though as stated earlier barring mass injury or a blowout, I really only expect to see Norton or Davis on the field much moving forward.

Speaking of moving forward, I believe the best way to predict future snaps is through games that do not include Ball State or Furman. For simplicity, we will examine participation against the Georgia Tech Yellow Jackets last weekend. Below is the breakdown of participation based on class. 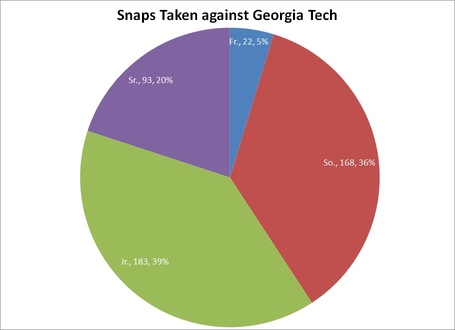 There were little surprises here other than the Freshman participation. This can be explained by inserting Norton for Beasley. I should point out that I don't believe Davis made the trip, so he may have been used instead if he were available. We all knew that our base five would play the majority of the snaps, and they did. See below for the individual snap breakdown last week. 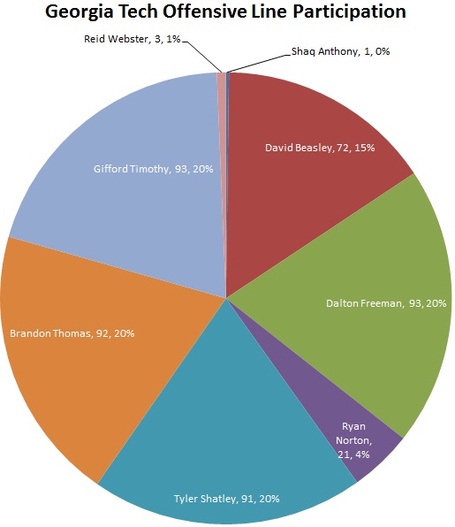 Beasley, Timothy, Thomas, Shatley, and Freeman. Those are your linemen for this season and fortunately, Clemson (only) loses Dalton Freeman this winter. With Ryan Norton (who has gotten some quality snaps this year) will fill right in next season. Outside of these guys (and maybe Kalon Davis), there are tons of question marks simply because we've only seen this handful of players in meaningful situations.

Full participation snaps for the OL can be seen below.