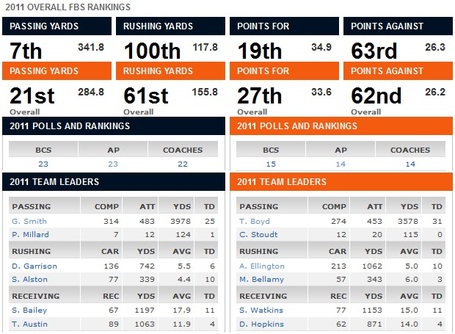 First and foremost, this is a belt game, so Dabo gets to "Wooooo, walk that isle, style and profile one more time down in South Florida, Whoooooo."

We discussed WVU's scheme at length through the 3-3-5 primer, the Airraid primer, and a Question and Answer session with Smart Football earlier this week. We've also discussed a lot of the background information pertaining to this team through these articles, so hit them us if you haven't already or refresh your knowledge base if needed. Accordingly, this preview will be more focused on the personnel and such.

Per the statistical ranking (7th in the nation in passing), it should be no surprise that West Virginia's two big playmakers are receivers. Stedman Bailey and Tavon Austin are the big names who have benefited from a pass first offensive philosophy. These players combined for over 2200 yards, 15 TDs, and 156 catches heading into the Orange Bowl. While neither of these guys is physically imposing (both 5'10" or shorter), both will kill you if the defense isn't paying proper attention. Bailey is more of a pure receiver, getting his nearly 1200 receiving yards on 67 catches. Austin is more of the utility man. They will throw the ball down the field to him but also like to hand the ball off to him on jet sweeps, reverses/end around type plays, and use him as a dangerous kick returner. The clips below confirm these players' capabilities.

Bailey tips the ball to himself

Bailey with a long TD catch vs Pitt:

Tavon Austin takes a kickoff to the house

Smith to Austin for a big play vs. LSU

Austin for a big gain on a jet sweep they've used quite often late this season. Note that its basically a touch pass and not a handoff, but this is basically what we use Sammy for with a different blocking scheme.

Austin goes 80 yards for a TD

Outside of Bailey and Austin, the performance drops off. Ivan McCartney has 47 grabs to date for 572 yards. Else, no other player has more than 24 receptions on the season. It is pretty obvious that Clemson will focus on the top two receivers as they are clearly the big play drivers of this offense.

Geno Smith is the signal caller for this WVU effort. Smith is a capable QB who is still adjusting to the Airraid attack and a lot of the quarterback responsibilities that go along with this offense. Smith is a pocket passer who can hurt you running the ball if the defense loses containment, though GS would much rather move his team down the team via his arm as opposed to his legs. Clemson will need to take advantage of a less than impressive Mountaineer offensive line to put pressure on Smith. It is not unreasonable to expect the Tigers to productively pressure this QB by bringing just four down linemen, as WVU has been manhandled at times throughout the 2011 campaign.

West Virginia, unlike many typical Airraid teams, wants to run the football when the situation is advantageous. As their stats show, they don't particularly run the ball well or in great numbers, but will use this aspect of their attack to keep defenses more honest and add a dimension to the attack. They base zone block rushing plays unlike other Airraid teams. Running back Dustin Garrison went for nearly 300 on basic run plays against Bowling Green earlier in the season. I am confident that Clemson's defense is better than Bowling Green's but will concede that our Tigers have struggled at times against the run, particularly when the attack comes out of direct snap geometry. Garrison will not play against Clemson (sprained ACL, MCL during WVU's practice last Friday) but I still expect the Mountaineers to, at least early, try to run the football if Clemson aligns in two high looks.

You will definitely see a lot of Nickel out of Clemson, as the Tigers need the extra defensive back to counter a lot of the four wide formations. We'll be watching the front four to see if they can dominate this WVU offensive line as they should. We've said it before and we'll say it again, no one here is overly impressed with the Mountaineers up front and we expect Geno Smith to be under duress all night.

Offensively, Tajh Boyd and the offense will need to adjust to the unconventional 3-3-5 West Virginia will throw at us. Clemson's big key will be the ability to run the football, as this is a defensive philosophy that can easily get gashed on the ground. Otherwise, we'll be extremely interested in how Boyd and the rest of the offense adjusts to the multiple looks and blitzes that will come. As Dr. B discussed in the 3-3-5 primer, this is a defense that can be killed on the ground. Whether Clemson gets this aspect of the offense rolling will largely dictate its success, particularly early.

For all of its shortcomings, the 3-3-5 does allow the defensive coordinator to dial up a ton of blitz combinations which could confuse protection assignments and/or our signal caller. We've seen both Tajh and the offensive line confused at times this season. Hopefully the ability to get everyone healthy up front puts Clemson in better position to pick up blitzes and such so that Boyd has time to operate. From Boyd, Clemson needs him to stay calm and attentive to (A) assure that the proper protection schemes are in place, (B) identify hot routes / where he will go if a blitz comes, and (C) use presnap reads to assure the Tigers are working into highest probability routes/route combinations.

We've discussed the Clemson offensive line so much that anything I say would be a regurgitation of something stated many times before. We again are hoping that Clemson somehow gets meaner up front and gets some push for Andre Ellington. Our Tigers will again be without Freshman Mike Bellamy but should have a full compliment of healthy players, assuming there were no after effects that we're not aware of in related to Nuk's auto accident prior to traveling down to Miami.

West Virginia Squeeks by the 'Natti