Venables was the co-defensive coordinator with Mike Stoops from his arrival prior to the '99 season through the 2003 season. Bo Pelini joined the staff following his departure from Nebraska but left to run LSU's defense after just one year in Norman (2004) as co-defensive coordinator with BV. Venables was the sole DC from the time Pelini left until Mike Stoops returned to OU and Venables left to take over the defensive reins at Clemson.

I'll point out in advance that the Big 12 evolved into a high powered offensive conference over the course of Venables' stay. Thus, the offenses that OU faced early in the '00 decade were not as potent on offense as the teams the Sooners played following the installation of high powered offenses at places like Oklahoma State and Texas Tech. In addition, OU's offensive coaches went elsewhere in the conference to install similar offenses. Introduction of these offenses increases conference rankings' importance. All data featured in this writing were attained from http://coachesbythenumbers.com from the 2001 season through the 2011 season unless otherwise noted. 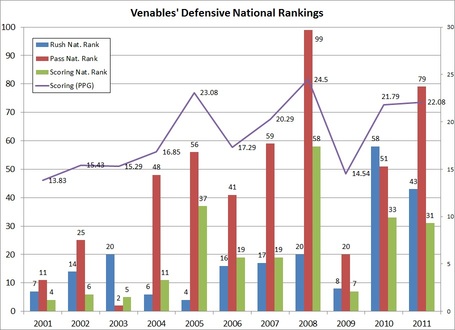 You probably noticed that Venables' defense was annually good/great against the run until his final two seasons at OU. In the first nine seasons of this analysis, rush defense was 20th or better nationally against the run. In the final two seasons, though, OU ranked 58th in '10 and 43rd this past season. The pass defense was less than impressive following Stoops' departure. The '09 squad had a good 20th overall ranking but the otherwise OU was average/below average defending the pass compared to the national average.

We tossed in the returning starters stat to show that OU returned even or more starters in in 7 of 11 seasons during this analysis. Not surprisingly, Venables' worst conference rankings occurred when the Sooners returned only four starters in '05 and five starters in '10. This shows the importance of consistency in the recruiting and development process. 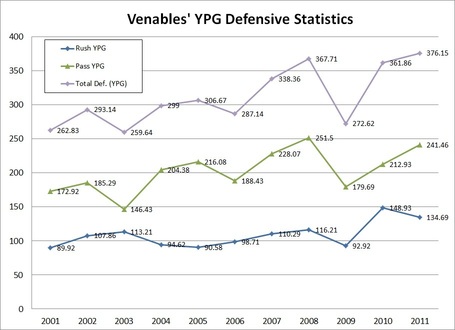 The Venables defensive trend shows the Sooners giving up more and more yards year after year. In the first four seasons of this analysis, OU averaged less than 300 yards per game in each season and never averaged over 114 ypg given up on the ground. This stout rush defense continued until the past two seasons when Venables' defense gave up 149 ypg in '10 and 135 ypg in '11. The pass defense over this period appeared more cyclical. The defense would show a positive trend in pass ypg for two seasons, then see a correction down. I found this curious when looking at the ypg charted data (see below).

Overall, these numbers show a distinctive upward trend in yards allowed per play since 2001. While the numbers put up early in the decade are unsustainable, the Sooners gave up nearly 1.3 ypp more in 2011 than at the beginning of the analysis period. Oklahoma, since 2001, averaged 4.62 yards per play. With a co-defensive coordinator, the Sooners gave up 4.31 ypp and have given up 4.8 ypp since Pelini's departure. Interestingly, following Pelini's departure, three of the seven defenses averaged fewer ypp than the '04 defense (4.79). However, only the '05 and '09 defenses approached the ridiculous ypp success seen while Mike Stoops was in the house. 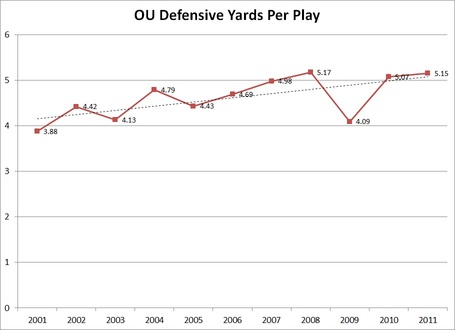 Clearly the Oklahoma defense surrenders more yards and points than in the early ‘00's. However, we also realize that the game has changed and this ain't your father's Big 12, as offenses evolved (exploded) during the time frame of this analysis. Thus, to gain perspective, we'll proceed to look at more in-conference play and compare the Sooners to another quality Big 12 defense as we continue to analyze the prospects of Brent Venables on the Clemson sideline.