The "Air Raid" concept evolved and was popularized by Hal Mumme and Mike Leach in the late-‘90's while both were at Valdosta State and Kentucky. West Virginia's coach Dana Holgorsen was a quarterback's coach at Valdosta State in the early ‘90's under both Mumme and Leach then worked under Leach at Texas Tech from 2000-2007. Holgorsen utilizes an evolved version of the "traditional Air Raid" that mixes in more standard running plays than Leach's standard offense.

In case you are curious, various sites have previewed West Virginia's offense and Airraid concepts. Here is a preview of WVU from an LSU perspective. Also, Smart Football (follow the link and/or review the Q&A we had with CB), the Mumme playbook over at Bruceeien.com, and Trojan Football Analysis.

Air Raid was designed as a hybrid Run and Shoot/West Coast offense. The chief concept being to create "space" by splitting linemen wider and WRs further in their routes, with a very small number of plays that are repped endlessly. Air Raid offenses rely heavily on the pass game with strategically designed routes and combination routes to mitigate the lack of a "traditional" running game. The typical formation resembles a spread ace look with the QB taking a direct snap from the shotgun. Trips formations as well as motion in and out of the backfield are also common to this offense; however the four wide, single back looks are a staple.

Another item you will notice is the size of the offensive line splits. Air Raid coaches typically like to get larger splits to push the defensive linemen further outside than normal. Remember that DL line themselves up based on the OL; a 3-technique is on the outside shoulder of the Guard no matter how far the Guard is from the Center. DEs must come to the QB from further away, giving the QB another half second. These larger splits create bigger bubbles in your front, and more spacing between LBs as well since they align the same way.

Quarterback play is critical for such an attack. Like a typical Run and Shoot attack, the QB is expected to read the opposing defense and potentially audible at the LOS. There are some read and react routes like the R&S though a large portion of the attack features quick anticipation routes common to West-Coast attacks. The routes are not particularly complex and, since there is less read and react, the onus is placed on the signal caller and/or coaches to get the team into the correct play based on the defense they face and execute once the ball is snapped.

Air Raid teams like to attack the perimeter with short passing routes in lieu of a traditional rushing attack. These squads also like to execute well planned routes on three different levels, commonly incorporating short/intermediate crossing routes to pick/rub linebackers and create relatively easy pitch and catch opportunities. You will frequently see the Mesh combo route, triangle concepts, as well as crossing mesh patters with small wrinkles thrown in to counter looks that defenses show.

Holgorsen's offense is a morph of the original Mumme/Leach attack. West Virginia runs the football more than stereotypical Air Raid teams. While they always operate using a direct snap, the Mountaineers will put two and three backs in the backfield at a time. Favorite formations with two and three backs are the diamond (inverted wishbone) and what I'll refer to as the half diamond. We talked a little about the inverted bone this past summer and, if you missed out, here are the links: Introduction then More Examples.

The "half diamond" is exactly what the name implies: a two back offense with a tailback directly behind the QB (in gun) and another back immediately beside the QB. This also allows the offense to get a third wide receiver on the field. As we discussed in previous articles, the diamond/half diamond formations are useful in the passing game as much as the running game. The extra backs force the defense to move more players into the box which creates more one on one situations for the set receivers. The legit threat of the run also allows the offense to utilize play action, something that is more difficult from standard Airraid sets. 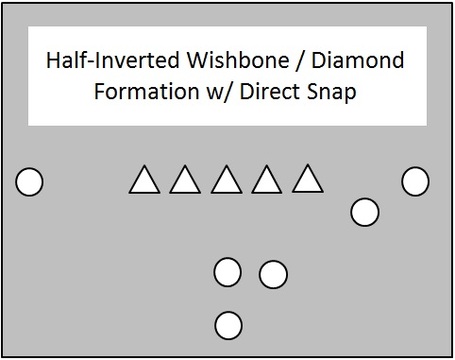 Additionally, West Virginia incorporated a lot of straight Pistol looks. We covered this topic a bit a year or so ago and these articles can be found through a two part series: Part I and Part II. The Pistol, Diamond, and Half Diamond formations are more contusive to rushing the football and, consequently, also set up play action much better than the typical Ace Gun looks we've grown accustomed to with previous Air Raid attacks.

The Smash combo is something nearly every school uses, including Clemson. The example below shows a 2X2 set featuring a double Mash (Mash combo routes to both sides of the formation). The routes are simple: outside receiver runs a 5-7 yard hitch and the inside receiver runs a corner route over the hitch. This combo route absolutely devours C2 and is a good route to use against C1 and C0. The reads are simple as well. Against C2, the QB watches the cornerback. If he is playing a Hard 2 and sits in the flats/on the hitch, the QB throws the corner route. Conversely, if the DB drops to provide support coverage on the corner route, it is an easy pitch and catch on the hitch route. Against man, the defender typically wants inside position on the slot receiver. This leaves the receiver with a decided advantage. Additionally, if the defense is in C1 with a safety over the top, the safety is in the middle of the field and in no position to provide support on the corner route. 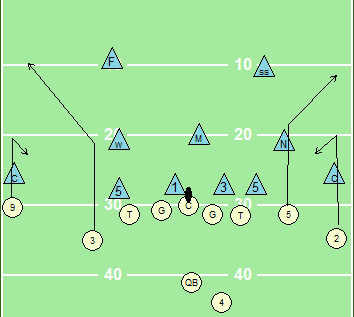 The Mesh is an Air Raid staple. We have not seen much of the traditional short cross as we would have expected, but still want to show this item because it can easily be incorporated into Holgorsen's attack-particularly with over one month to prepare for this football game. Generally, you'll have the two inside receivers (or possibly a back/TE) cross between 4-6 yards downfield of the LOS. Typically, coaches run a corner route with one of the outside receivers. The other side of the field (backside for this play) sees a receiver either in the flats or running a deep post/dig route. First read is the corner, then the receiver coming off the mesh towards the corner route, then the other mesh receiver, then finally the backside flat/post route.

In the video below, the offense uses the back to split the C2, placing even more pressure on the safety.

"Snag" is a concept that many, many teams use because it combines horizontal and vertical stretch concepts to get favorable matchups and place defenders in compromised positions. We documented Clemson's success running this play earlier in the season and the result was a long touchdown scamper by Sammy Watkins against Auburn. Snag is a three receiver combination that attacks the flats, the field's middle yet also stretches the field vertically. It is very similar to the stick sans this can be run out of either a three or five step drop under center. 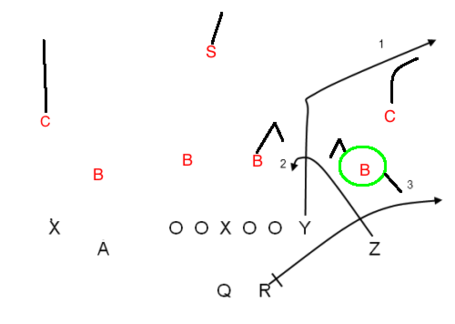 This concept is part of a larger philosophy commonly referred to as the "triangle" attack--though the triangle is synonymous with the snag play. It is called "triangle" because it utilizes three receivers to attack various spots in the defense (flats, mid, and possibly deep) through a personnel bunch on one side of the formation. These players maintain spacing to create both a horizontal and vertical stretch of the defense. Long and short, there are many, many plays that evolve around the triangle concept and there are many, many teams on all levels of football that utilize these items, as shown below. 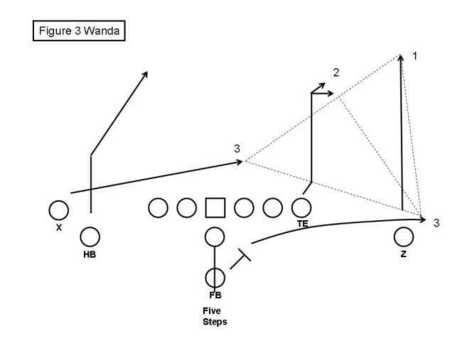 The stick concept is a mature idea that has become quite popular on all levels of the game. The concepts shown here are very similar to those of the snag. Essentially, the outside receiver runs a fade inside receiver runs a hitch, and the back (or in the case of trips, the trip receiver furthest inside) will run a speed out to the flats. The goal underneath is to place the player with underneath/flats responsibility in a bind, having to choose between the hitch and the speed out. This is a three step drop where the first read is the fade/clear route, then the QB reads the underneath receiver.

Again, Smart Football does an excellent job describing these concepts.

This item seems like it has been around forever and many of you will remember this from BYU film from 30 years ago. This is a classic play that attacks the opposition three levels and floods the playside. Typically, the reads go from (1) Fade to (2) Y-Cross to (3) H-Out to (4) Flanker Dig to (5) Back Swing. 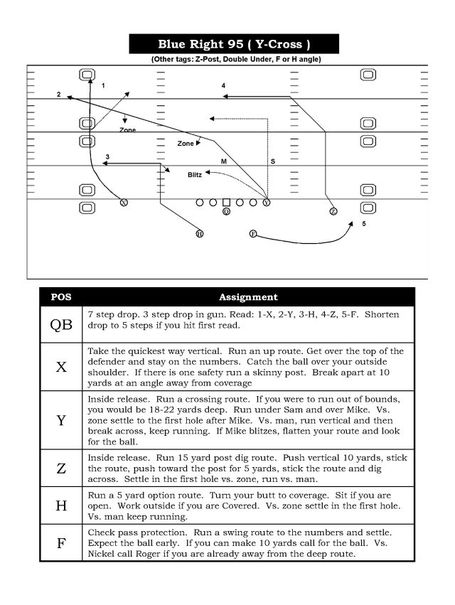 Here is the updated Airraid version:

I borrowed this quote from Cougar Sports Weekly, as it is pretty much distills this play in a few sentences:

Ace Rip 6 Shallow - also known as just the Shallow Cross - is one of the most Airraid of Airraid plays. Its beauty is that virtually any quarterback can complete a pass to a receiver running that route, and if the defense is in man-to-man and the H is being covered by a linebacker, watch out - he can run for days. In essence, it's a running play with a pass option

Here is a slight variation of the cross that can easily be incorporated:

Here are a couple of examples of the shallow cross:

All Airraid disciples utilize screens and short passes to the flats to offset the relative lack of a running game. As such, you'll likely see a barrage of screen passes that can be run to any eligible receiver. Trojan Football did a nice job looking at many of the typical screens employed by Texas Tech under Leach.

Here is an example of a wide receiver screen you'll probably see when Clemson takes the field against WVU: 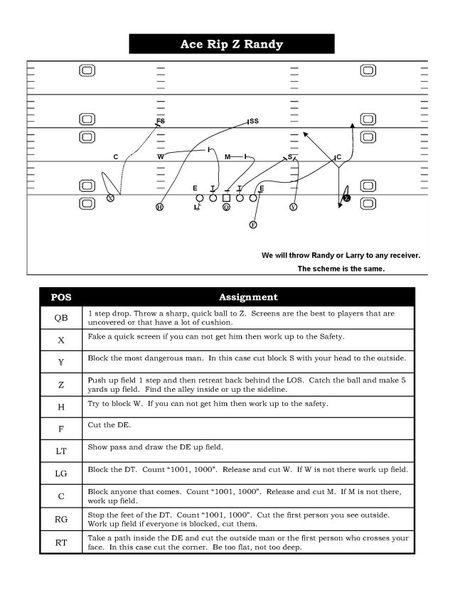 As with all aspects of football, blocking is critical to make these screens work. The larger splits that Airraid offenses typically utilize position linemen for receiver screens. The other receivers are also critical to assure this offense is successful in the screen game. We harp on perimeter blocking and, typically, Leach's proteges understand the importance of perimeter blocking and, as such, get great production in the receiver blocking category. The clip below (which is linked in many other places than here) shows just how critical and important receiver blocking is in this attack.

We repeatedly showed above how Airraid strategically runs its backs out of the backfield to get them in space. These plays augment rushing deficiencies while creating favorable offensive matchups (typically a runningback on a backer), set up relatively simple passes, and put pressure on the defense to be concerned with one other aspect of this passing attack.

West Virginia doesn't do anything overly unique when they run the football. As has been discussed, Airraid offenses typically do not feature the run, BUT WVU and Dana Holgorsen make an effort to run the football when the defense allows. We've discussed inside and outside zone plays from the pistol here before, so I won't delve into those topics. They will also lead with the "fullback" out of the half diamond formation.

Notice these items as Garrison runs against Bowling Green

Outside of the basic rushing plays, West Virginia will do whatever it takes to get the ball into it's playmaker's (i.e., Tavis Austin) hands. Austin has shown how lethal he is on end arounds and other special plays that Holgo has installed to utilize his talent. Clemson will see some of these items on Wednesday and will have to stay home and make tackles, else Holgorsen will mix and match the "standard" run plays with designed plays that hand the ball off to the team's best offensive athletes, their receivers.