Share All sharing options for: Wofford at Clemson Game Preview

Wofford comes into the 2011 season as the defending Southern Conference champion.  The Terriers return 42 total lettermen (17 on offense, 23 on defense, 2 on special teams) including five (5) offensive starters and eight (8) defensive starters from the 2010 squad.  I encourage you to check out the Wofford Media Guide if you are curious about Wofford's football history as well as the individual players/coaches.  I found it interesting both Fisher DeBerry and Jerry Richardson are Wofford alumni who went on to notable football careers afterwards. The snippet below (courtesy of the Wofford Media Guide) provides a quick overview of Wofford football historical items.

You probably remember the last time Clemson played Wofford way back in 2001.  Clemson was down 14-7 early before the Tigers battled back for a 38-14 victory.  I will also point out that Wofford gave South Carolina some issues a few years ago before the Gamecocks pulled away late.  The point to be taken here is that Wofford is well coached and runs an offense Clemson doesn't see week over week.  The offensive novelty combined with the discipline and intelligent players that traditionally make up the Terrier roster could keep this team in the game early.

Wofford is coached by Mike Ayers who has been the head man in the Sparkle City since 1988.  Ayers has won a boatload of football games at Wofford including three (3) Southern Conference championships in the last eight (8) football seasons.  Mike was the recipient of the Eddie Robinson Award back in '03.  To date, he is 0-1 as a head football coach against Clemson (2001).

The Terriers return senior QB Mitch Allen, fullback Eric Breitenstein and senior Brenton Bersin on offense.  Breitenstein had over 1600 yards rushing and 22 touchdowns a year ago.  Mitch Allen had 871 yards and 8 TDs through the air and over 600 on the ground in 2010.  Last week against PC, Breitenstein had 19 carries for 107 yards and a touchdown.  Sophmore Donovan Johnson contributed with 13 carries for 91 yards on the ground against PC and QB Mitch Allen carried the ball 13 times with a TD on the ground along with 7 completions for 138 yards and a couple TDs through the air.  Jeff Ashley led the Terrier receiving corps with 2 touchdowns and 70 yards on the night.  2011 Wofford vs PC stats can be found here.

The 2011 Wofford offense is described as the "wingbone" that relies heavily on the running game. In a nutshell, the prototype Wingbone formation is a Wishbone with one of the RBs moved up to a wingback position, with 1 TE and 1 WR. Georgia Tech's Flexbone is a Wishbone with the FB moved back, and both RBs moved to WB positions, with 2 WRs and rarely uses a true TE. Finally, the Wing-T is a T-formation (3 RBs side by side, with 2 TEs) with one RB moved to a WB position. Coach Steele described their offense as a blend of the Georgia Tech, Auburn, and South Carolina attacks.  The Terriers will show a wing-t look featuring two wide receivers as well.  Wofford frequently utilizes a direct snap with a couple backs show a variety of backfield formations out of this look.  Wofford has the potential to utilize three receivers out of the non-double wing formations.  You will see some power, inverted bone, lots of sweeps, and some more "conventional" spread formations when the Terriers have the football.  We covered a lot of these concepts over the summer and over the past couple seasons, so we encourage you to review some past articles to freshen up on these topics. The offensive system runs many of the same plays that GT does, but the position of the Fullback allows them to run basic I-formation power running plays as well.

Look for Wofford to use a lot of backfield motion as they try to confuse Clemson with various option-type plays.  We'll be leery of the fullback dive along with the constant threat of a quarterback keeper.  Wofford has a tendency of lulling their opponents to sleep with basic run plays (dive and variations of the option, in particular), then will hit a big play through the air off of play action.  If the opponent overplays and/or over pursues, Wofford has the ability to run counter-type plays and/or reverses off of a typical veer track.

Clemson will feature much more base defense than last week.  Troy's spread look forced Clemson into nickel most of last week.  Wofford's three back sets will have the opposite effect. We expect to see Cover 4 coverage most of the time. I expect more 4-3 under and/or some 3-4 with the OLBs crowding the line of scrimmage when the Terriers show double wing formations.  Either way, it'll be essentially a five man front just with a mix of personnel.  Also, don't get freaked out if Steele utilizes a two point stance out of the bandit end or experiments a little in this area.  It isn't a major scheme change, just a slight adjustment.  I believe we'll more than likely slide the SS into the box in certain double wing situations as well to provide run support.

When Wofford shows three wide sets we'll continue to play base as this personnel is more than capable here.  You will see safety adjustment and/or linebacker shifting toward the twin side.  This is typical and expected.  Steele could probably get away with base personnel against four wide sets but will likely rotate the fifth defensive back in under such a scenario.

While Wofford runs a multiple-50 front, that doesn't necessarily mean that they will show a five man down lineman front continually.  From my limited study of Wofford film, the Terriers show a 3-4 look and then typically make a line shift (stem) to the strongside and walk the weakside linebacker up to cover the OT.  In more balanced sets, a straight up 3-4 look was shown.  A "traditional" five man (50) front was present in goal line and short yardage scenarios.  I've pulled a couple clips (see below) to illustrate these ideas. 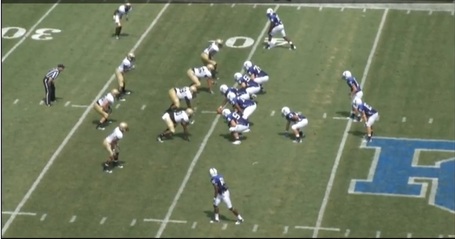 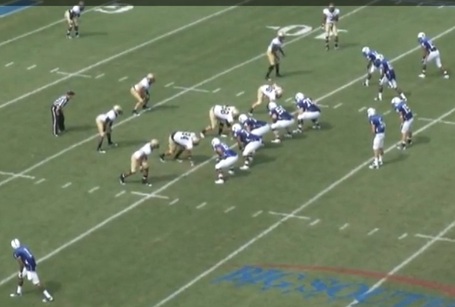 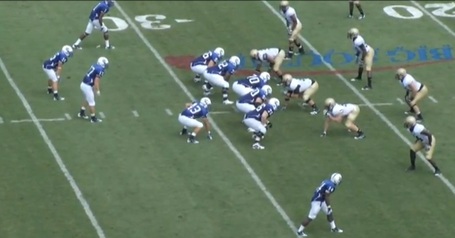 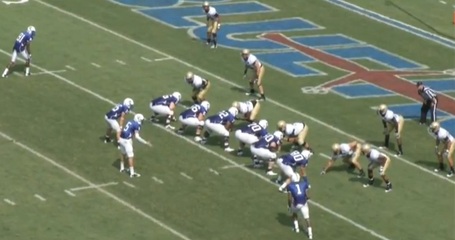 Regardless of the look Wofford shows, Clemson will run its base offense and we won't show much variety.  The number 1 thing we're looking for is to escape with no injuries. After a dismal performance up front to open the season, Clemson shouldn't have nearly as many issues with Wofford's defensive line.  Clemson should be able to do more (i.e., throw the deep ball and run Ellington more) due to this line superiority. If we don't dominate up front, expect a lot of cussin' after the game. I'm looking for a little more backfield motion from us, which was prevalent in the Tulsa film, and considerable success on inside zones. We'll still be watching to start identifying more of Morris' tendencies and to assess technique before a challenging three game stretch following Wofford.

As stated earlier, Wofford is a well coached football team that may be able to hang with the Tigers early.  It is important for Clemson to avoid three and outs to assure Clemson can get to the magical 80 play point.  If Clemson can get a couple "long' drives early and wear down Wofford, this one will be early soon. This is Clemson's last offensive tune up before Auburn rolls into town, so it is important that we see Andre Ellington in football shape and assure that the younger guys are comfortable/confident with this scheme.

We'll get a good look at Clemson's defensive discipline.  Wofford's option attack will require discipline in all aspects of the defensive game.  We'll also get a glimpse at some of the younger guys playing for an injured Rashard Hall.  Hopefully we'll see some improvement on tackling and this group (especially the lesser experienced players) get comfortable with overall gameplay. 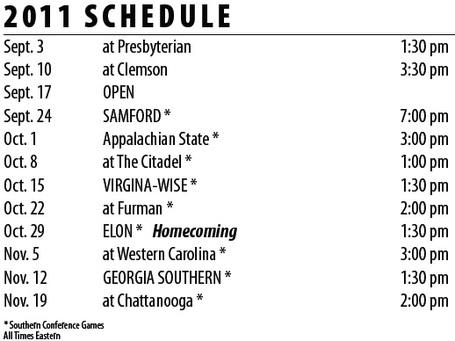