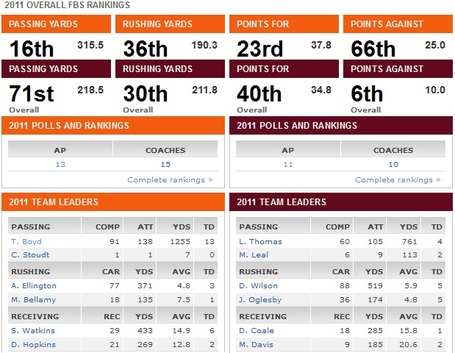 We show more complete statistics after the jump.

Clemson (ranked #13 in the AP and #15 in the Coaches Poll) heads to a very tough place to open the season, Blacksburg, VA. They play a Virginia Tech team that boasts a better ranking (#11 AP and #10 in the Coaches Poll). The Vegas handicappers open this one at Clemson +7. This signifies to me that the "experts" are cautious about this Clemson team as we are here at STS. They also realize that there are a couple fresh faces who will be making their first road starts at night in Lane Stadium...a tough measure for anyone.

The experts are probably asking themselves "How good is FSU and how good is Auburn?" Those are very good questions. I think the opposite question is very valid as well. How good is Virginia Tech? They haven't played anyone significant yet and were in a really close one with an average/below average East Carolina team a couple weeks ago.

We provided information on the modified 4-4 "G" Virginia Tech defense and a coaching staff overview earlier in the week. As always, we encourage you to brush up on this information before Saturday evening's contest.

Virginia Tech's offense is led by Sophomore Logan Thomas. Thomas, a 6'6" Lynchburg native, has completed just over 57% of his passes (105 attempts) for 761 yards with 4 TDs and 4 INTs. Logan Thomas has 27 carries for 122 yards and a touchdown to go along with his passing statistics.

David Wilson leads the rushing attack with 87 carries for 516 yards and 5 touchdowns on the season. He has carried the ball 20 times or more in each of Va Tech's last three games and had 16 rushes for 162 yards and three TDs in the season opening win over App. State. Josh Oglesby is second on the team in rushing with 36 carries, 174 yards, and 5 TDs so far.

Virginia Tech will show a lot of two back and or two tight end formations and try to run the football. Thats what they do and they won't deviate too far from it. Running back David Wilson is good and has had success on the season. VPI will use him to take pressure off of first year starter Logan Thomas, who is trying to fill the shoes of 2010 ACC POY, Tyrod Taylor. Look for the Hokies to line up and try to run over a Clemson defense that was less than impressive during its first three football games against the run. Virginia Tech is not scared to use play action and heave the ball down the field and will rely on the running game to set up their passing attack. Logan Thomas himself has good talent, and a gun on his shoulder.

Look for Clemson to show more base 4-3 than they have all season. Virginia Tech will take Gun snaps but like to play typical (1st and 10, 2nd and less than 7, 3rd and less than 3-4) under center and in either a two back set or out of the Ace formation. Because of the formation and the Va Tech run first strategy, Steele will be happy to substitute in the extra linebacker for the nickel.

I will say that Shane Beamer's antics against East Carolina were impressive. They were struggling a little on offense so Beamer spiced it up a little (as shown below). I only hope Dabo doesn't get footage of the sweet headbutt Beamer delivered to his running back, else we'll have a head football coach with a concussion on Saturday. (Thanks to Collegiate Times for the GIF).

The Virginia Tech defense features an aggressive quasi-8 man front that will take away the run and force Clemson to pass. We think Bud Foster will do what he normally does: Blitz, blitz, and blitz to hurry and confuse So. QB Tajh Boyd needs to remain poised and identify what's happening in front of him quickly. Virginia Tech's coverage schemes are designed to make the offense overcome pressure and methodically move down the field. You'll see some Robber concepts and Cover 4 looks all day Saturday, with the loose Cover 4 that will give more underneath. Foster and Beamer have been very successful over the years with the 4-4 "G" concepts and this defense is a morph from the Hokie mid-90's defense that accounts for modern spread offenses.

Clemson QB Tajh Boyd will have to remain patient against the VT defense. Tajh will need to keep his head under pressure and realize that taking a sack or throwing the ball away is not always the worst thing for the football team. We will also need to continue to do a good job up front pass blocking and successfully use backs and max protection when necessary. I imagine Andre Ellington will be needed for the majority of the game simply for pass protection purposes, as he is likely best equipped to pick up the rush out of the backfield simply because of experience. For this reason, I don't expect to see much out of Mike Bellamy on Saturday.

I look for Clemson to try and execute at two levels: in the flats and vertically. V-Tech will be more flexible in the flats and Clemson's excellent receivers could make them pay if they get the ball in space. On the flip side, I expect to see four wide sets in which Clemson lobs bombs down the field to guys like Martavis Bryant and Sammy Watkins. Those guys are good receivers with enough speed to make things happen against Cover 4 or Cover 1. If CU can do a good job keeping defenders off Boyd and/or Tajh can play smart and get rid of the ball before getting sacked, Clemson could have a nice night on offense.

Special teams will need to improve over last week. Clemson should have had a punt blocked at the end of the half and, because of this breakdown, punter Dawson Zimmerman was injured on the play. Clemson tackled poorly on kick coverage and missed a short field goal. Virginia Tech puts a tremendous amount of emphasis on special teams and will capitalize on any mistakes the Tigers make there. They expect to score each week on special teams and have done a fine job over the years beating opponents with their punt return/block team.

Team Statistics for Both Squads (thanks Grey Matter Stats): 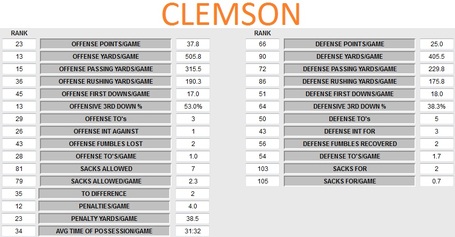 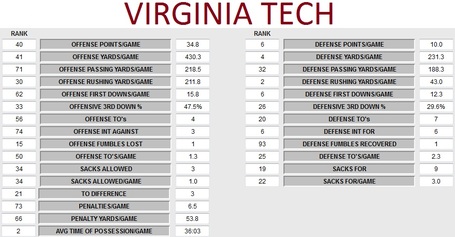 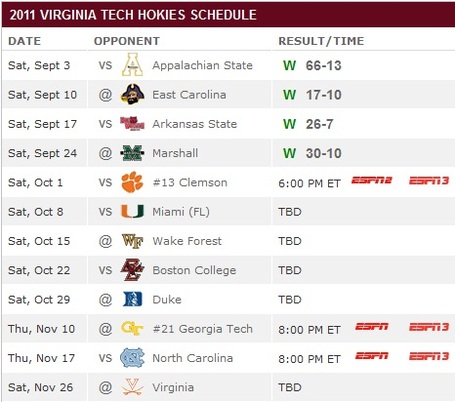