Inside the Virginia Tech Defense

Share All sharing options for: Inside the Virginia Tech Defense

Virginia Tech’s defense is a unique one in major college football in that it is very much an older style of defense descended from the Gap 8 and Wide Tackle 6. When Frank Beamer coached under Bobby Ross, they ran the Wide Tackle 6, and he took that with him to VT. It is actually not a 4-3 base, as its introduced on your TV sets, but is a 4-4 front that has morphed into using 4-3 personnel. Most of the time, there is a safety/LB hybrid that is dropped into the box to create a true 8 man front. The reason why they can adapt to spread offenses reasonably well is because of the player they put at the hybrid position. It’s a different approach from VK’s 4-2-5, which dropped one SS into the box, but essentially a 4-2-5 plays like a 4-4 front against any pro-style 2-TE/1-2 back offense. How did you think TCU was able to defeat teams like Wisconsin with their 4-2-5?

However, what VT does is very different from TCU and here we’ll showcase the fronts and coverages VT likes the most. The primary reason why more teams don’t try to run this type of scheme is because of the inability to find the two swing players however, and you need them to play against spread teams.

VT’s version of defense is a morphed descendent of what the Washington Huskies ran in the 80s and early 90s when their defense dominated the Pacific coast under DC Jim Lambright. They made popular the "G" front and took the 1985 Bear’s 46 defensive front as a compliment, which Tech would call the "Tuff" package. 46 does not stand for 4 DL and 6 LBs, the name is derived from the player Buddy Ryan used to play one of the attacking LB positions. His number was 46. It is actually a base 4-4 front. The defensive front called "Bear" is part of the 46 defense, but they are separable things. A "Bear" front covers both OGs and the Center, making it an Odd front. A 46 is by definition a "Bear" front, but to use "Bear" does not necessarily mean a 46 defense. The "G" front is a 4-man Even front that covers both OGs with DTs, and is heavy on stunting. Because its Even, the Center is totally uncovered. So complimenting it with the Bear front gives you the choice of going Even or Odd with a stem (pre-snap shift). It is generally made with a 2i-technique on the weakside (Wide 6) and a 3-technique strongside (Split 6), so its quite close to the Over front (1 tech weak, 3-tech strong). The strongside End, called a "Stud", aligns over the inside of the TE (7 technique) and the other DE aligns in a 5-technique. VT shifts their G front to the Field side as well into a 4-3, whether its weak or strong, which gives them 3 fronts in the base package. This "Field G" is mostly what Virginia Tech is in nowadays.

Because of their Field/Boundary alignment philosophy, the same defenders do not always get matched on the same offensive players. Nuk Hopkins is usually a Boundary-side WR, so he gets the Boundary CB most of the time. However, if he goes Fieldside, he'd be matched on someone else. Watkins is usually Fieldside. 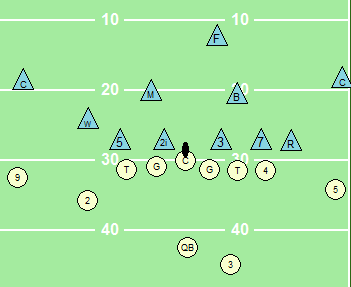 The "G" front is the base front, but here I have not adjusted to the formation.

Because it’s a 4-4 defense that has to be able to handle the spread offense at times, it needs some rather special players at some of the hybrid LB spots. The WHIP LB is a weakside LB, analogous to a JACK LB in a 3-4, who often blitzes off the edge in pressure situations, but who has to be able to cover backs well. He does not have to be a big guy, but he does have to have a very high motor. He can have a SS build and sometimes aligns deeper, like the FS. You’ll see how they get away with that in coverage later. 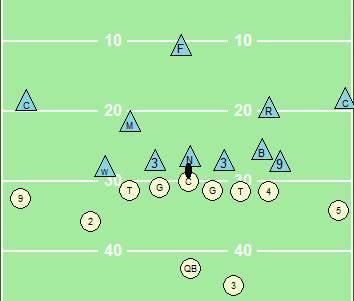 The 46 defensive front. Not adjusted to the offensive formation. 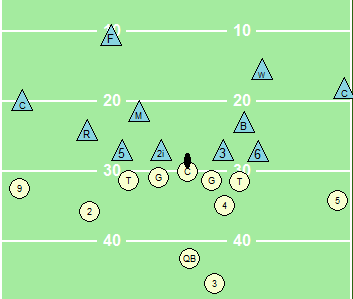 Field G front. Rover adjusts to the better receivers or Field side. Whip starts back and creeps up or vice versa.

The Rover is an OLB who plays more coverage, like a SS. Think DeAndre McDaniel. His initial alignment is quite often in the box, but he doesn’t get up on the LOS as much as the WHIP. Rover always goes to the side of the passing strength (not necessarily the TE side) or the Field side, and WHIP always aligns opposite the Rover. If the ball is on the hashmark, Rover goes Field side, WHIP to the boundary. WHIP often creeps up because he usually gets a 1 on 1 matchup with the RB in coverage.

There is an extensive blitz package in VT’s scheme. I don't have the time to cover them all, but this is a pressure-based defense. It is mostly combined with Man coverage and is pretty heavy on stunts and exchanges between the DL and LBs. Its heavy on blitzes from those two hybrid players. When they face 21/22/12 personnel, they’ll set up in the G front or Bear front most of the time. In that case, both Rover and WHIP will show blitzes naturally. This is particularly true when the Whip or Rover is aligned on a slot WR -- he’ll come hard on the blitz pretty often. If your slot recognizes it and runs a slant, the FS has to hustle to get there and take that away. 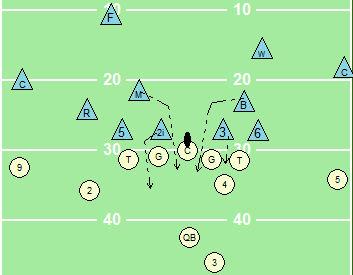 Dog Inside Blitz, a common blitz you see from Tech.

What VT plays most against pro-style teams is Inverted Cover 2 Robber, but the deep cover guys are the Cornerbacks, not the safeties. When they play 46 front, its mostly man/man, because it’s a pressure front like the Under we use. 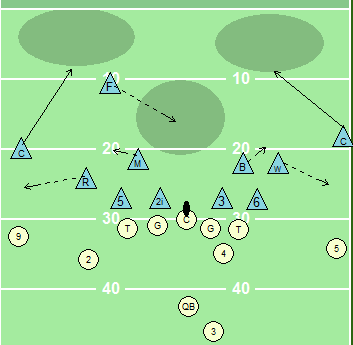 Inverted Cover 2 Robber is a 2-deep, 5-underneath zone coverage that uses the FS as the Robber. WHIP might align himself like a FS, but he’ll come down over the middle into a hook zone instead of dropping for deep half-field coverage. The FS himself will play Robber over the very middle of the field and watches the eyes of the QB to take away intermediate routes, yet against the run he’s a 9th man in the area to fill a gap. Its a bit like a Tampa 2 defense, where the MLB drops back deeper in zone over the middle with 2 safeties behind, except that here you’re dropping the FS down instead of backing up the MLB. These coverages have the goal of taking away the crossing routes over the middle and the post route that is used to attack C2 defenses, but also keep a guy relatively close to the LOS to help with the run, or running QBs. I’d call both of them pseudo-Cover 3.

The Corners cheat deeper in this coverage at 7-9 yds, so they can rarely show Press man pre-snap when 2-Robber is the call. The pre-snap look is quite often Cover 4 because of this. They have to get depth immediately to play deep-half coverage. They are looking at the QB and reading his actions without letting the #1 outside WR get past.

The Rover aligns to the passing strength pre-snap, so he’ll adjust to the slot WRs most of the time. His initial spot is 3x5 off the TE, reading the #2 receiver. Because he lines up so close to the LOS, he has to be really good with his backpedal fundamentals to be successful, but in 2-Robber he has the flat zone strong. Depending on the formation, Rover can pick up the #1 receiver short and the FS comes down on the slot, with the CB still in deep half-field coverage behind.Whip aligns himself several ways, so you need a good football player here. The most common is a walked out position on weakside slots, but he can also align deeper at 3x5 or almost as deep as the FS. In his walked out spot, he is reading the backfield triangle to the #2/#3 receiver and has the flat zone weak.

The other two LBs, MIKE and "Backer" play zones over the middle like any other Cover 2 zone. MIKE is the same type of player as MIKE in a 4-3 defense, but Backer is more like a SAM LB in a 4-3, and often gets the RB or TE to the passing strength. When the TE switches sides, usually the Backer flips spots with MIKE to cover him. Also, against Ace and Doubles sets, the coverage basically changes into 1/4-1/4-1/2 Cover 3.

So now the first question to come to mind is "How do they even handle spread teams when they can have 8 or 9 men in the box?"

If you play C2R, and the opposition sends the outside WRs deep, the CB must go with him, which takes away the deep help for everyone on one side of the defense, so that it basically ends up M2M. You cannot play straight M2M all the time.

Well, Bud had to change his defense a little to handle that. He had to use less of the C2R and more Cover 4. He had to make the Rover less a run-defender and more of a full-time DB, a SS in layman’s terms. Cover 4 is technically a zone defense, but plays like M2M and often ends up looking just like the normal Cover 2 you’re used to visualizing. Because of how it is designed, it is still strong with Safeties as run-gap fillers off the edges, but because of that they are susceptible to play-action moreso than a true C2 squad. Also, because of the rather shorter depth of the Safeties, you can attack their run reads directly with a vertical route directly at them, like a Post or Go route up the seam. What VT wants to do to you is show the 8 man front, and force you to go into max-protect blocking, and then peel those extra 2 guys back into Cover 4. That gives up some of the flat zone coverage, so watch for more WR screens this week if they show us C4. 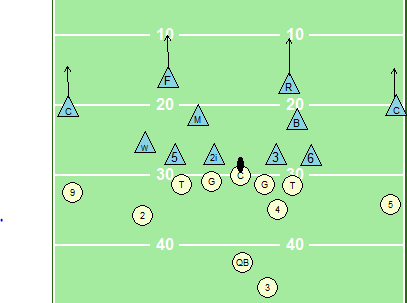 To make that work, you still need to get pressure from the DL, and I think this has been one of VT’s biggest issues on defense over the last few years. The talent of their front just is not what it once was. Foster’s defense is always going to be well-coached, and being well-coached puts players where they need to be, but you still need some talent to beat better OLs even if the defenders are where they need to be. They just don’t have the special players they used to get at those hybrid spots and DE, which they always used to have.

Also when the offense sets into Trips, you're not able to play a true C4. It turns into a 1/4-1/4-1/2 scheme, C3, or you have to split the coverage so that the single receiver backside is getting man coverage. What I do see Tech doing is forcing opponents to keep the RB/TE in there to block by blitzing the WHIP often.

Tech often checks out of 4 into their version of straight Man, called a Cover 6 package, but it maintains the C4 look. The 6 comes from the switches called between the LBs and the backfield. Backer and Rover would take the strongside back and pass him off inside or out depending on his route. If he went out, Rover has him. If he comes inside, Backer takes him. The same thing happens for Mike and Whip. With two CBs outside you basically have 6 ways it can work without changing the call. Cover 6 goes well with the pressure fronts they like to show.