Frank Beamer is a college football icon who is currently in his 25th football season as the head coach of his Alma Mater, Virginia Polytechnic Institute and State University.  Prior to taking the reigns at V Tech for the '87 season, Beamer spent six seasons as the head ball coach at Murray State.  He was promoted from defensive coordinator at Murray State and, before that, he was the defensive coordinator at The Citadel.  At The Citadel Beamer coached under Bobby Ross and at Murray State he was an assistant under Make Gottfried.

Beamer steadily built Virginia Tech into a powerhouse football program over his first decade or so as the university' head coach and has kept the Hokies relavent ever since.  VPI played FSU in the National Championship Game concluding the '99 season.  Va Tech has won the ACC four times since beginning ACC football play in the 2004 season and won three conference championships as a member of the Big East.

Beamer's style of play, known as "Beamerball," is almost Beamer's football identity.  The core concept behind "Beamerball" is to have the ability and mindset to score in all three facets of the game.  The Hokies are notorious for defensive scores and points through special teams--particularly on the punt return/punt block team.  This routine "non-traditional" scoring requires fundamentally sound gameplay along with an aggressive mindset.

Frank Beamer has a reputation for appealing to his assistants and has been able to keep his core staff intact for many seasons.  Offensive Coordinator Bryan Stinespring came to Virginia Tech as a graduate assistant in 1990 and has been at VPI ever since.  Defensive Coordinator Bud Foster has been with Frank Beamer since his graduate assistant role at Murray State in 1981.  Foster followed Beamer to Blacksburg in '87 and was promoted to defensive coordinator in the mid-‘90's.  These two coordinators have a half a century's worth of experience with Beamer in some capacity.

Here is a table of current members of the Va Tech coaching staff (courtesy Wikipedia): 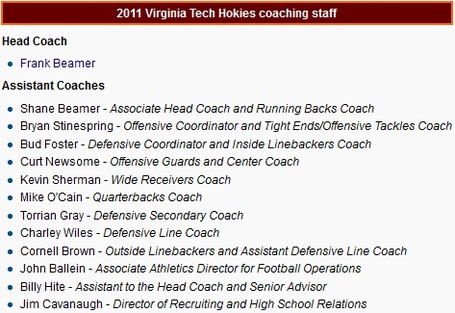 Bryan Stinespring owns the title of offensive coordinator at Virginia Tech and has been in this capacity since the 2001 Gator Bowl.  The game day play calling duties, however, were given to former Clemson QB, QB's coach, and offensive coordinator Mike O'Cain in a February coaching staff shakeup.  In case you were wondering, Stinespring coaches the Tight Ends and Tackles (the OT's being added to his plate after he was stripped of his play calling duties) and O'Cain again works with the quarterbacks.

The aforementioned playcaller change came after years of complaints from the Hokie faithful regarding the offensive output despite what appear to be very respectable statistics.  This sentiment can be seen here at FBS (Fire B. Stinespring blog).  Below is an offensive performance overview under Stinespring's direction (courtesy www.wikipedia.com):

Many of you out there are probably asking the question:  "Why Mike O'Cain, especially after his experience at Clemson and why such a strange setup (offensive coordinator who doesn't call plays)?"  So far as O'Cain as an offensive  coordinator, his time at Clemson was a bit of a gray area.  I believe O'Cain's official title of Offensive Coordinator was only for the 2004 season but the quarterbacks coach was involved in playcalling in previous seasons.  The oddity here was the three-headed monster (Tom Bowden, Brad Scott, and Mike O'Cain) who collaborated on play calls for some time.  Thus, there was confusion about who was doing what and when during MO's final tenure at Clemson.  O'Cain's fate at Clemson was sealed following a 13-16 loss to the Duke Bluedevils when he said the duke defense had him confused at times.

It is my understanding that both O'Cain and Stinespring were in the booth and both had playcalling input in previous seasons.  I also understand that the head coach has a distinct comfort level with his QB's coach calling the plays because of the natural position coach/QB relationship.  Rickey Bustle was the QB's coach while at VPI and O'Cain was also the QB's coach and offensive coordinator at Murray State.

Stinespring is scheduled to coach from the field in 2011, so perspective could be an issue.  Also, Coach Beamer has a lot of respect for Stinespring as a coach and, equally important, as a recruiter.  I would postulate that Beamer didn't want to demote his faithful assistant, has a lot of confidence in him as planner and line coach, but is leery of in-game decisions.

We discussed the Head Coach's relationships earlier and should point out that O'Cain worked with Beamer at The Citadel and was Beamer's first offensive coordinator at Murray State, so the two have a lengthy history.  Here are the vitals for both of these offensive coaches (courtesy Virginia Tech Media Guide): 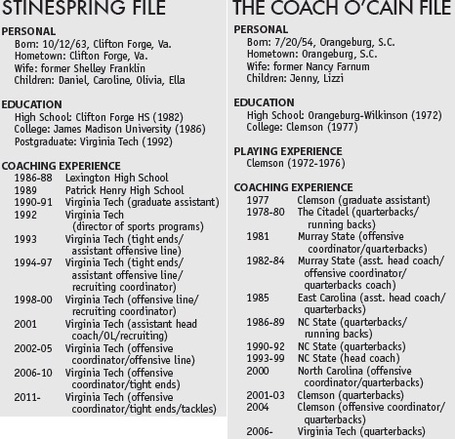 From an X's and O'x standpoint, Virginia Tech features a balanced attack that uses the run to set up the pass.   The Hokies show a lot of "I" formation and Ace looks under center.  The Hokies showed early on that they are not afraid to try and stretch the field.

Defensive Coordinator Bud Foster is a very respected coordinator who is frequently mentioned in various coaching searches.  Most CU fans will recall that Foster interviewed for the Clemson job in 2008.  Foster also interviewed for the Pitt job this past January and, I believe, will get his shot as the head man sometime in the near future.  I guess I should note that Foster was born in '59, so if he gets a head coaching gig I would suspect it would need to be within the next five years.

Foster and Virginia Tech popularized the single high 4-4 "G" in the ‘90's.  This defense featured a multitude of blitzes to mitigate the QB's effectiveness and provided a base eight-man front for run support purposes.  You'll also recall Va Tech's use of "Robber" for both pass and run stopping capabilities.  We discussed the "Robber" concept here before, so I'll point you in that direction instead of breaking it down here.   Va Tech was unique in their defensive back arrangements.  Tech positioned their corners deeper (often in man or with the corners effectively playing the deep men in a two-deep look) and pushed the "Robber" safety closer to the LOS where he was able to look into the offensive backfield and to provide great run support (and essentially a nine-man front) when the opposition ran the football.  This defense was extremely successful against two-back sets.

Offenses eventually countered with Spread formations which stressed this scheme because of the spacing and the number of pure athletes the offense placed into space.  Foster countered by replacing a linebacker with another DB and moving to a Cover 4 base look while still maintaining many of the same principles used with the 4-4 "G."  The second safety still plays the same way the linebacker he replaced would and is able to essentially provide eight man run support all game.  VPI will try and cheat him towards the LOS whenever possible.  This aggressive safety play allows the VPI defense to maintain base concepts that have worked for years.  These adjustments allow appropriate adjustments against the spread and assure a numbers advantage for the defense.  There are various locations to read about these concepts and we will be looking into them more closely here at STS as game day approaches. 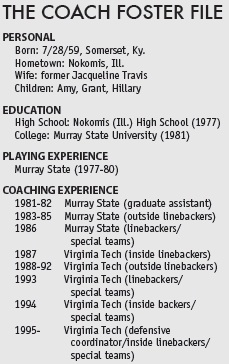 Longtime Virginia Tech assistant Billy Hite gave up his on-field coaching role and accepted a job as Assistant to the Head Coach and Senior Advisor.  Hite has been a part of the Virginia Tech football program since the late '70's and had been the running backs coach since 1980.  This move by Hite allowed Frank Beamer's son Shane to rejoin the Hokie coaching staff as Associate Head Coach and Running Backs Coach.

Cornell Brown was brought in to coach the outside linebackers.  Brown was previously a coach up in the Canadian Football League.  He replaces Jim Cavanaugh who had served on Beamer's staff since 1996.  Cavanaugh, like Hite, has been moved to an administrative role.  He currently serves as director of recruiting and high school relations.  See below for each coach's profile (again, courtesy Virginia Tech Media Guide): 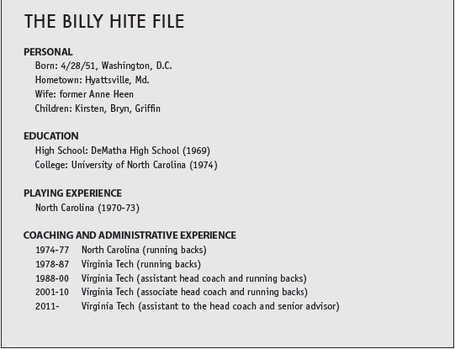 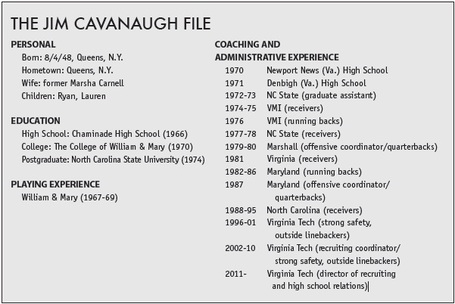