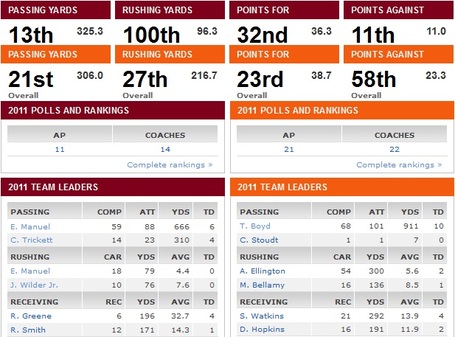 As you all know, this is a College Football Belt game.  Interestingly, FSU won their first belt in Death Valley back in '88.  The 'Noles are 25-5 all time in belt games, with all of those wins occurring between the '88 and '00 seasons.  FSU has had Belt game defeats since against in-state rivals Miami and Florida.  See below for the all-time Belt game records for these two schools and visit www.collegefootballbelt.com for more info on College Football's version of the "Ten Pounds of Gold."  **Note, all statistics pertaining to the belt and the graphic below credited to www.collegefootballbelt.com**

FSU Head Coach Jimbo Fisher has been around the college football game for many years. Coach Fisher played quarterback at under Terry Bowden at Samford and was named NCAA Division III player of the year in 1987. Fisher became Samford's QB's coach in the early ‘90's then quickly moved on to reunite with T. Bowden as quarterbacks coach at Auburn during the mid ‘90's. He spent a year at Cincinnati then was able to catch onto Nick Saban's staff at Louisiana State and was retained at LSU by Les Miles after Saban's departure for the professional ranks. Fisher later joined the staff of another Bowden (Bobby) at Florida State in ‘06 and has been in Tallahassee ever since. He first rejuvenated their offense, then was named "Coach in Waiting," and now leading the ‘Noles as the Head Coach.

Fisher's legacy as an assistant is twofold. First, he is an incredible quarterback developer, coaching and improving the likes of Josh Booty, Rohan Davey, Matt Mauck, JaMarcus Russell (who was quite good in college at least), Matt Flynn, as well as former FSU signal caller Christian Ponder.  Finally, he proved to be an excellent play caller and offensive tactician, refining these skills at LSU before heading to Florida State.  Jimbo Fisher is an excellent offensive mind and has shown that his offenses can adjust not only to the team that they play but also to their own talents.

Florida State has gone through a complete renovation since arriving in Florida's state capital.  His first task was to fix an offense that was run into the ground by Jeff Bowden.  Bowden inherited an offensive juggernaut and basically ruined it until he was paid (a lot of money) to leave by FSU boosters.  Fisher steadily improved the offensive attack, molding this unit into one of the best in the land.

Dr. B saw a lot of Fisher's offense in his time at LSU and I would highly encourage you to check out his post from the 2009 season on this topic (click here).  The following is a good summary of what to expect out of him

"The Fisher offensive system is a pro-style spread, in that sense it's the same as Clemson's (at the time in 2009), but this is a catch-all term. It is a system that uses considerably less pre-snap motion and more personnel groupings than what Clemson does. It is more multiple in formations: I-formation, offset I, Ace, Jumbo Ace (2TE-1RB-2WR), 3/4 wide shotgun, pistol...with liberal use of the H-back or a 2nd TE. Its not a system that is designed to dink & dunk you in a West-Coast style like Miami, but attacks all levels of the defense. He always took what the defense gave: if they can run, he'll run it. They'll throw it deep, intermediate, and short. Fisher did not run quite as many screens at LSU in my recollection, but it has been developed into a heavier screen offense to keep pressure off Ponder and force the defense to make plays in space."

James Coley got his collegiate start as a graduate assistant at LSU in the early '00's, dabbled around as an offensive assistant then quality control coach with the Miami Dolphins before returning to the college ranks as Florida International's offensive coordinator. He has been with the Seminoles since '08. There is little doubt that Jimbo Fisher has his hand on the pulse of this offense at all times, as he should.

Offensively for the Seminoles, injuries are the big story leading up to this contest.  Quarterback E.J. Manuel is questionable for this one after suffering a shoulder injury last weekend against Oklahoma.  If Manuel cannot go, we'll see freshman Clint Trickett under center.  Trickett came into the Oklahoma game and played admirably late in the game with a big touchdown pass that temporarily tied the game last week.

The quarterback position is not the only spot that was bitten by the injury bug.  FSU will likely line up without five of its receivers on Saturday due to injury.  The guys over at Tomahawk Nation talked about this earlier in the week and pointed out that the ‘Noles will need a big game from Rodney Smith because of these injuries.  See the table below (borrowed from the aforementioned T-Hawk Nation article) for the overview: 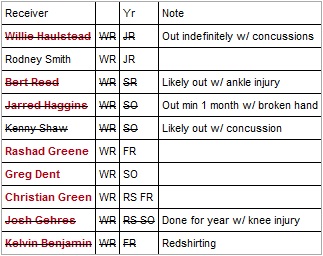 Florida State has had issues all season running the football.  EJ Manuel was the team's leading rusher on the season with just under 80 yards on the season.  Obviously, your running game is not great when the QB is the leading rusher with 79 yards and it is even worse because this player suffered a shoulder injury the week before.

It is important for Clemson to make sure tackles and not allow this offense to get yards on the ground.  The Tigers want to make FSU throw the football with its (likely) inexperienced backup quarterback and a banged up group of receivers.  As shown above, Florida State averages less than 100 yards per game on the ground and is in the lower ranking portion of Division 1-A schools in this area.

Clemson's defense will have its hands full, but this isnt an impossible task. Auburn was a better offensive opponent. We have noticed some issues with FSU's pass protection like our own, and its due to injuries and issues at RB. A RB that is just coming in as a young guy always needs to work on pass protection, and they have had issues with the back's picking up the pressure. Expect Steele to bring pressure quite a bit.

Our defense will probably be in Cover 2 most of the day, and more M2M than if FSU had all their WRs healthy. We'll be showing more of our base fronts here as well. Their backups are young, but they're also playing against some of our own youngsters in Breeland and Robinson, so we'll give up a big play or two.

Fisher's focus on resurrecting the Seminole football program began by essentially cleaning house on the defensive side of the ball and addressing his strength and conditioning program following Bobby Bowden's departure.  Fisher went out and hired Arizona defensive coordinator Mark Stoops.  Stoops brought with him a 4-3 look with an emphasis on zone defense.  You'll recall that Mickey Andrews' philosophy was man-based and, at least in the latter part of his tenure, provided linebackers with extremely liberal rules of play.  Stoops is more of a stickler to detail and appears to run a much tighter ship than the FSU defense at the end of the Bowden-era.

Up front, the Noles will show a variety of fronts that include both over and under looks.  Florida State will show all of the typical zone looks you would expect, depending on the situation.  Against pro-style two back sets, Stoops will show Cover 3 and zone blitzes. Against the spread he'll move into a Cover 4 look that starts out of a 2-shell. Stoops' approach is to make the opponent beat you methodically. He tries to do everything he can to keep the ball in front of his defenders, which means this defense will compromise some shorter completions to protect against the "home run" ball.

I encourage you to click here for a very thorough analysis of the Stoops defense.  Here is how Bud Elliott of Tomahawk Nation sums up this defense:

‘If I could summarize Stoops defensive philosophy, it would be to be extremely assignment sound by virtue of stressing fundamentals and details.  The defense will concede short passing gains on early downs and will endeavor not to allow the big play.  Stoops wants to force teams to consistently execute with precision down the field over and over again (not allowing the big play).  Stopping the run is the focus on early downs.  The goal is to play with great leverage and force the offense into unfavorable leverage situations.  On "passing downs" expect to see some form of pressure with zone coverage behind it, forcing the quarterback to think instead of react."

We'll further note that this is a defense that bases out of a stacked 4-3 set, and is predominantly Cover 2-based. In that sense, it's similar to Boston College's system, but these are very different defenses. FSU runs alot of Over and Undershifted fronts, but they do not blitz as often as the old Andrews' defenses did. We do not mean that they are a read & react squad like BC though. We expect to see some Man/Man coverage in blitz situations but largely expect the ‘Noles to try to force Clemson to put together methodical drives and not beat them with big plays. This is the strategy implemented successfully a week ago against a very good hurry up offense in Oklahoma.

Florida State has a very, very talented defense led by a stout group of defensive linemen.  Their pass rush will be led by Sophomore Bjoern Werner.  Most certainly Clemson will have difficulty running the ball this week.  The Tigers have not proven they can get yards A-Gap to A-Gap and Florida State's quickness should negate perimeter rushes.  Florida State's secondary is much better than Auburn's and highlighted by safety Lamarcus Joyner.  Clemson will have to fight much harder this week for yards and the big plays simply because FSU's defense is legit and blows away any of the defensive play we saw out of AU in the Valley last Saturday.

We expect that Mark Stoops noticed our problems with blitz pickup against Wofford and Troy. Auburn had little success but they also did not disguise anything they were doing to us, which wasn't complicated, so we discount that game a little when it comes to pickup. We did block extremely well for Boyd against the talented front of AU however. We think you'll see FSU zone blitz us with overload blitzes just like Troy did.

We also believe FSU will have confidence in their interior to stop our inside run game, no one else has sold out to stop the run inside against us, honestly. Other teams haven't been able to stack the box with 7 or 8 because of our formations. FSU won't either. Instead, we think they try to take away our outside sweeps with a little more man/man press and edge pressure from alley.

FSU's linebacking corps is talented, but aside from Christian Jones we are not particularly scared of them in space. They are sound, but he's the playmaker. We need to isolate Allen on Jeff Luc or Nigel Bradham if possible. Ryan Broyles was able to beat them over the hook/curl zones.

At safety and CB, the best hope is to get a matchup on Reid in zone and someone else in man/man. Reid is just not a great zone CB. He's very aggressive and it can be exploited.

Florida State looked very good against what should be a high powered offense last week.  Further, FSU got a look at an up-tempo offense that features playmakers and the 'Noles were able to match their talent up well against the Sooners.  We all expect to see a much stouter defense this week than we saw against Auburn. 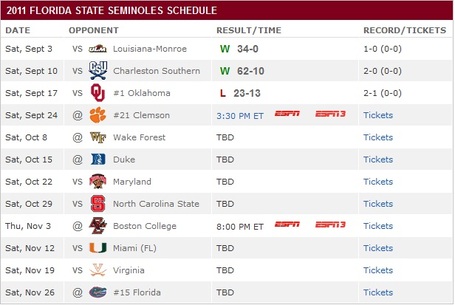