Inside the Clemson Offense: The Three-Man Snag and Watkins 65 Yard TD Reception

Share All sharing options for: Inside the Clemson Offense: The Three-Man Snag and Watkins 65 Yard TD Reception

Sammy Watkins had a huge 65 yard touchdown catch on 3rd and 6 to put Clemson ahead for good against the Auburn Tigers last weekend.  The concept behind this play is fairly simple yet effective and is commonly referred to as the 3-man snag.  This route combination provides an answer for most anything a defense throws at it.

First, we’ll show the play, then get into the basic concept of the snag, then apply these concepts to the Watkins TD.

Sammy Watkins goes 65 Yards for the Go Ahead TD:

This concept is, in its most common form from this formation, shown below: 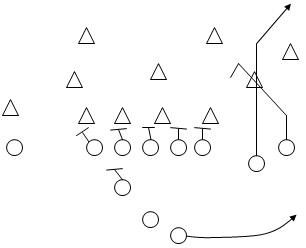 The quarterback progression is pretty simple: 1. Back flair, 2. SE hitch/curl, 3. Slot corner.  This is a very good play to run against zone defenses but is also effective against man if your receivers run good routes.  The Tigers had success on the hitch/curl against both and here are two basic and simple rules for this role:  1) against man, the rule is to push your man and make tight, clean cuts and 2) against zone, the receiver has more latitude and will seek then sit into soft spots in the zone, usually between 5 and 7 yards off the LOS.  Again, very straight forward.

At the snap of the football (or hopefully in a pre-snap read), the qb identifies the defense.  Against Cover 2 we’ll see the corner with flat responsibility prepared to blow up the back out and SAM in this curl/hitch passing lane.  Hence the slot running the corner or flag route is the read, as he’ll slide in behind the sitting corner and will be a long run for the playside safety.  You'll also see the split end make a conscience effort to work into the middle of the field and fill the void left by the dropping backer. In any case, the receiver must be aware of defender positioning to get open.

Against man, you’ll want to your SE to push the corner on a straight up hitch.  The QB has to decipher if a linebacker can cover the back out and will throw to the back if he cannot.  Else, you’ll see a two man timing/anticipation throw on the hitch, which Clemson was able to convert in the first half of the Auburn game.

Both Clemson and Auburn showed slight deviations from the above figure.  Auburn left the interior twin receiver uncovered on the LOS, placing SAM inside while playing the corner at seven yards off the line just off the outside shoulder of the widest receiver.  AU looked to be playing a combo 31 coverage (three deep to the twins side and cover one to the weakside) or something similar.

At the snap of the ball, Tajh Boyd watches MIKE and notices he has back out responsibility.  He gave a slight shoulder fake to back out before the completion to Watkins.  Charone Peake pushed deep and forced the playside safety to respect the "Go" route down the seam.  The combination of the corner/flag route potential from Peake as well as Watkins pushing hard upfield makes the cornerback respect the deep threat with a deeper drop.  Watkins recognizes zone, sees the corner drop and, from his presnap observation, knows SAM is inside so he’ll want to keep his route further outside to find the zone’s soft spot.  He pushes his hitch to the first down marker and the ball is well thrown.  Sammy makes the grab, breaks a couple tackles, and then outruns everyone on the field for the critical TD.

Here is, schematically, how the play worked out: 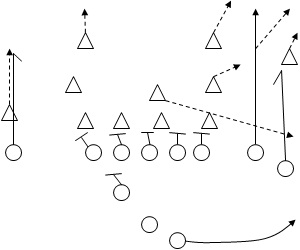 I’d suggest visiting Brophy Football and Pile of Wit for more information on the two and three man snag concepts along with more specific items related to specific player execution.