Today we'll compare the Clemson and Auburn depth charts as presented via the Clemson University athletic website, www.clemsontigers.com.  The Clemson side has shaped up to more of a two-deep than we showed in the season opener and should give you a better average of the talent on this squad.

As shown below, Auburn is, on average, more talented on offense, defense, and special teams when compared to Clemson on a Scout/Rivals star basis.  None of these averages is over 0.10 stars (special teams), however.  Offensively Auburn averages 0.05 stars per player better than Clemson.  Defensively, their Tigers are 0.04 stars per player better than our Tigers. Each of these is a fairly small and nearly insignificant margin.  It is worth pointing out that both teams have a lot of talented youngsters and will play these folks during the game on Saturday. 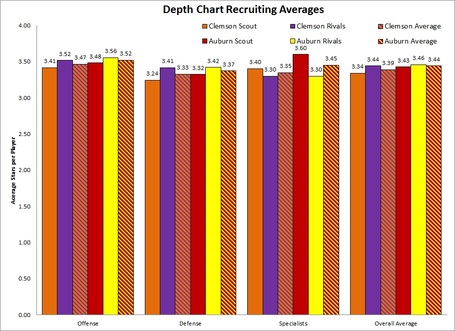