Share All sharing options for: Troy at Clemson Game Preview

Troy is a member of the Sun Belt Athletic Conference and has built quite a reputation for itself over the past couple decades.  Under Head Coach Larry Blakeney, Troy has advanced from Division II in 1990 to Division 1-AA in 1992 to Division 1-A in 2001.  Before arriving at Troy in 1990, Blakeney was a quarterback at Auburn in the late ‘60's and was an assistant on the Plains prior to assuming the head job at Troy.  Troy has a 2-3 record in bowl games under Coach Blakeney and have won five (5) consecutive Sun Belt Championships.  Additionally, Blakeney is a member of the prestigious State of Alabama Sports Hall of Fame.

Larry Blakeney is known as an excellent recruiter.  He is often referred to as one of the best non-AC recruiters in America.  Troy traditionally takes chances on borderline qualification players and Junior College transfers.  The borderline qualifiers force Troy to annually oversign (they have signed no fewer than 26 players since the 2006 class and accounted for 40 commitments in 2009).  This is no knock on Troy, as their staff is doing everything they can do to compete with the in-state Auburn's and Alabama's along with other, bigger schools for talent.  Further, I commend this staff for willingness to take risks necessary to bring in the talent that wins multiple consecutive conference titles.  Signing and hoping/signing and placing/finding top JC talent is tough and these guys do it well. 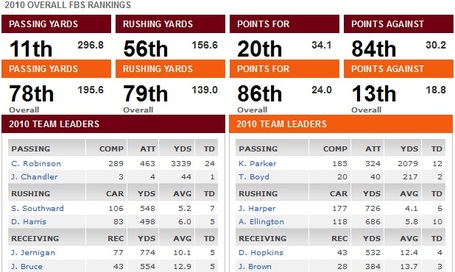 Troy broke in a new quarterback (Corey Robinson) in 2010 who they are extremely excited about.  Robinson is probably their most potent offensive player heading into the opener at Clemson.  The Trojans were a wide open pass oriented team in '10, averaging nearly 300 yards through the air last year.  The Trojans lost their top three receivers from a year ago which will probably have this offense more run-focused early in the season.  As good as the Troy was on offense with the passing game last year, they were almost as bad defending the pass.  They allowed a ton of offense through the air last year and will need a great pass rush by a really good defensive end tandem along with better performances out of the secondary if Troy wants to have a really big season.

How does Clemson matchup?

Troy's biggest strength will be its defensive line, specifically pressure it applies to the opposition on the edge with DE Jonathan Massaquoi.  We have discussed Clemson's offensive line concerns at length this offseason, particularly our concerns with our OTs against a quick defensive end.  We'll watch Massaquoi against our line to guage what we'll see against the big boys later on in the year.

Troy's defense got torched through the air last season and, though they have brought in some new faces, we think that Clemson should be able to attack their defensive backfield.  Their 4-2-5 scheme will allow us to gash them running the football if we play good fundamental ball, as I'm leery of their nickel talent against some of our inside zone running plays and/or some power sweep plays we should feature.

Offensively, Troy would have scared me a lot more last season but lost two of its best receivers, Jernigan and Gill.  They run a pass-heavy spread scheme so Clemson will show lots of nickel out of a four man front.  Intuitively, one would think that with the skill player losses Troy endured in the offseason they will try to run the ball more.  The issue here is a lot of losses up front.  I honestly don't expect nearly as much excitement out of these guys compared to their average a year ago.

We'll play a lot of nickel, so you will get to see the extra defensive back along with the Mac and Money players.  I'll specifically be watching Justin Parker when he rotates in to fully understand where he stands on this defense.  Realistically, Troy should not challenge the Clemson defense if, for no other reason, because of the turnover from a year ago and early growing pains they'll experience in '11.

Troy runs a spread offense descended from the Tony Franklin system and generally threw the ball all over the field the past couple seasons. I expect they will need to become more conservative this season with the loss of Jerrell Jernigan.  In 2010, they were not scared to throw the ball deep.  Troy was also proficient throwing the ball over the middle of the field through slants, medium post routes, and deep/skinny posts.  Base rushes will be inside zone and some, though normally very little, zone read.  Be aware that they have used a "wildcat" attack in the past, lining their better athletes to receive a direct snap and make things happen here, usually on the edge. Generally they prefer screens to running the ball, but because of the depth at WR, we do think they'll have to run more.

Look for Corey Robinson to improve over a decent year as a first year starter in 2010.  Robinson struggled at times, tossing 15 interceptions on the season but came on strong for the Trojans as the season wound down with 3700 yards total in this pass-pass-pass system.  Robinson led the Trojans to a bowl victory over Ohio to close out the 2010 campaign.  He effort at Oklahoma State was impressive.  He and the Troy offense torched the Cowboys to the tune of 3 TDs and 0 INT's.

We'll be watching how Robinson does against our young secondary closely. On zone read he'll be facing mostly secondary defenders on the edge as well.

The offense will featured two capable backs a year ago:  Chris Anderson and Shawn Southward.  While neither had a spectacular season a year ago, each will be looking for more carries this season as the offense attempts to replace Jerrell Jernigan at the receiver position.  Southward is a dangerous target out of the backfield, hauling in 13 catches for nearly 200 yards last season.  His 2010 RB counterpart, Anderson, pulled in 19 catches for 119 yards and a TD a year ago.  Anderson came to Troy as a receiver and, after converting to the RB position towards the end of last year, looks to return in 2011 primarily as a receiver.

Jerrell Jernigan is a big loss for this team.  Jernigan played an impact running the ball, returning kicks, catching the ball,and I believe I saw him throw a touchdown at one point.  Jernigan was effective as a wide receiver in all areas.  He was impressive going across the field and was very slippery after he made the catch (ask Oklahoma State).  Troy will really miss this weapon and may struggle early to find a player or group of players to fill his shoes.  Jerrell currently is part of the NY Giants organization.

Troy will be searching for an emergent receiver or two this season.  Chip Reeves returns as the team's leading returning receiver from a year ago (30 catches, 515 yards, 5 TD's in 2010).  We expect Brett Moncrief will be the star of this group if/when he returns from a nagging foot injury.  The folks at Troy are also excited about Junior College transfer Corey Johnson and hope that Johnson will impact this team in a similar fashion to last year's big skills player JUCO transfer, Chris Anderson.

Most of the Troy offensive line will need to be replaced this season.  The Trojans struggled at times up front and won't be tremendously impressive here this season.

We expect Troy to pull in the reigns a little on its wide open passing offense, but remain in an almost no-huddle pace.  This commitment to running the football doesn't have as much to do with a sophomore quarterback as it does with the loss of serious receiving threats over the offseason.  That's also not to say that Troy will totally ground its "bombs away" offense, just pare it back a little early on.  Troy does have some returning talent at running back and they will probably utilize this attack early while newcomers get accustomed to the offense.  They'll use Southward as a main ballcarrier and Anderson a quality receiving and potential rushing threat.

Troy is going to score points, this won't be a shutout.

Troy returns eight starters from a year ago so, while their performance in 2010 wasn't overly impressive, they are fairly experienced.  The star of the defense is end Jonathan Massaquoi.  This is the cousin of former UGa star WR Mohammed Massaquoi.  He redshirted in his first year at Troy after a season at Butler Community College and is a pass rush specialist with 13.5 sacks. Notice how well he does against Phil Price, but we hear Troy will put him on both sides to get matchups. The Trojans feature two good linebackers (Xavier Lamb and Kanorris Davis) and bring back three starters, corners KeJuan Phillips and Jimmie Anderson and SS LaDarrius Madden.  Also featured at strong safety will be Brynden Trawick (former Michigan State player).  Barry Valcin, who saw time at both Baylor and LSU before finding a home at Troy, should also push for some PT in the secondary. J. Elder also played at Alabama. There are tons of JUCO and transfer players here.

Troy will need to improve in its pass defense if it wants to have more success this season.  The Trojans gave up nearly 250 yards a contest (in a less than stellar passing league) through the air last season and will need improvement in this area.  They'll rely on Massaquoi to put pressure on opposing quarterbacks.  They'll get secondary help from some newcomers who were involved with some big time college football programs before landing at Troy. 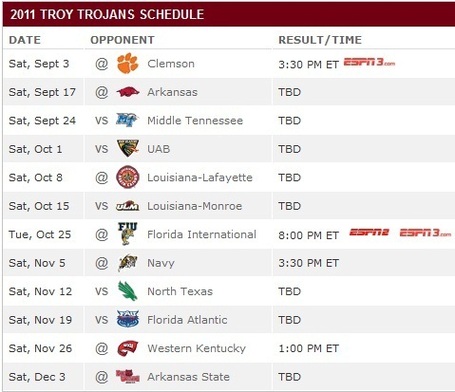 This is a completely different team than last year's, but we'll still examine portions of the 2010 season because, well, it's their last competition.  2010 for Troy was a 8-5 season that featured a big win  in the New Orleans Bowl.  Games of interest include a really close one at Oklahoma State, another close one against North Texas, a beat down in Columbia, and a bowl win over Ohio.

OK State (11-2 overall in 2010) was very fortunate to prevail in Stillwater last year.  Troy gave them all they wanted, leading this game at halftime and Troy had the football with less than a minute to go in the contest and a chance to tie/win the football game.  Troy torched the Cowboy defense and, while they were definitely not the only team to put up big numbers against OKST in '10, they were still pretty impressive.  I probably don't need to remind you that Troy boat the Cowboys back in 2007.

I was surprised with Troy's struggles with North Texas last season.  The Mean Green were absolutely terrible yet were able to keep it within a touchdown of Troy.  I point this one out because Clemson faced N. Texas a year ago and beat them soundly in the opener.

South Carolina whipped Troy in 2010, putting up nearly 70 on the Trojans.  That game got well out of hand early.  Yes, South Carolina beat Clemson soundly as well. 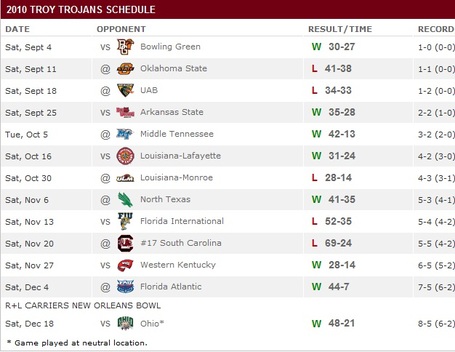