Inside the Clemson Offense: Verticals

Share All sharing options for: Inside the Clemson Offense: Verticals

One thing we noticed in the film study of Tulsa from Morris' time there last year was the prevalence of vertical routes. On nearly every pass play, the routes he uses are meant to put pressure on the defense vertically. Most of the time, at least one or two players are headed deep. Four verticals is a very simple play that can be lethal to a defense, and I have seen him call it 2 to 4 times per game. If anything, it lets the defense know that you're going to push them deep and keeps them from jumping quick passes, even if its not successful at getting a long play.

The QB's first thought on this series of plays is to find the FS and discern the coverage. If there isnt a FS in the middle, as in Cover 2, then he'll look to the safety on the hash strongside. Once he finds the FS, he will want to try to influence him to move left or right by locking his eyes on a receiver, with the intention of throwing to someone else. If you can't get the safety to bite this way, then the object is to dump it off to the easiest throw or throw open the receiver with better leverage on the safety. 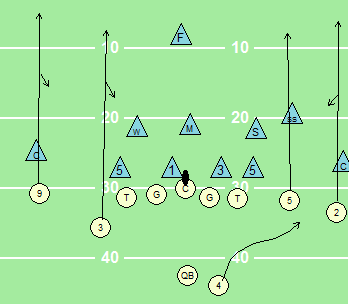 4 Verticals against a MOFC defense

So in the above 4 verts, against either a C1 or C3 defense, he'll be looking at the 5 with the intention of throwing the ball to the 3-back, or vice versa. If he can't influence the safety to jump one way or the other, he is supposed to dump it off to the 4. His read progression otherwise is inside-outside-back on the strongside, so 5-2-4.

The receivers outside are running Go-read routes. They are going deep initially, but then they can make a judgement call on whether they believe they can beat their man deep. They break and hook at 15 yards depth if they cannot, but must sell the Go route first. The inside receivers are running seam-reads, so they head up the seam and put pressure on the safety to bite. If there is a safety on the seam, as in Cover 2, they hook at 12-15 yards. 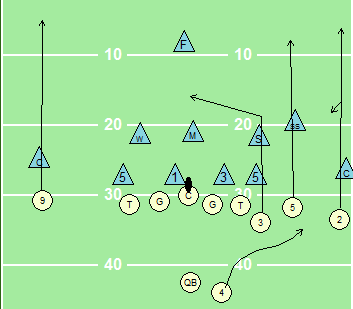 From Trips, the inside receiver needs to break on a post or slant to draw the safety down/across from the seam route. The back could run his arrow/shoot to the opposite side.

Against teams that play softer coverages, and that like to drop extra defenders due to confidence in pass rush (like FSU) or those that naturally play it safe (like Koenning or Boston College) in coverage, you can run the back vertically. It works in much the same way as above. The QB looks to the seam route first, but on the weak side, noticing whether the FS goes with it. If he does, the ball should hit the RB heading up the middle on a skinny post or to the other seam route to the strongside. 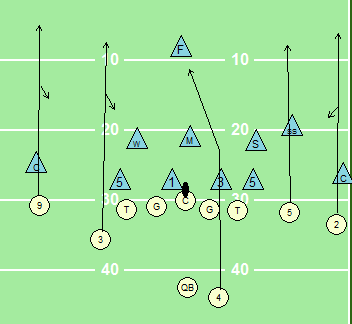 Now we can add tags to the play to attack specific players on the defense or coverages. When they play cover 2, the Smash pattern is a common technique to high-low the #1 defender. We'll do the same thing starting from Verticals and high-low the #2 defender with a Dig route. Dig is a deep In route usually at 12-15 yards. 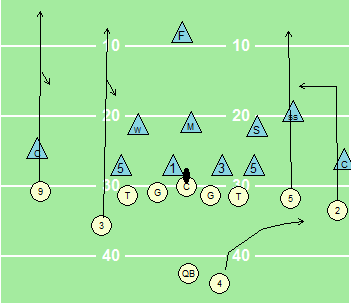 The QB's read is the defender on #2. If he comes down to attack the 4-back, the Dig will get open. if he drops too far, to protect the seam route, the Dig can come underneath him and get open. Technically, if it is zone, the defender should drop at 45 degrees initially, contact the receiver up the seam but not drop further than the Dig route. The FS should pick up the seam if it goes behind the SS.

You can see that the SS, the defender on #2 WR strongside, may have a decision to make if he's playing zone. He'll eventually get sandwiched between the seam route from 5 and the Dig from 2, along with the arrow/shoot route from the back. In a trips set, the only real change is that one inside WR on a Go route will run a bit wider and eventually get closer to the sideline behind the Dig.

On 3rd & long, instead of having the inside receivers run seam-reads, we can tell them to hook no matter what. This gives the QB another stationary receiver to hit when you must convert the downs. The vertical pressure should still keep the pressure on the FS and stop him from jumping on the hitch. This is something we've noticed Morris does quite often in his pass patterns. 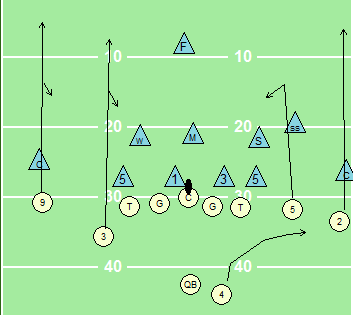 The QB reads the FS here, and if he goes with the deep receiver (3-back), then the hook should get open. Otherwise he'll look deep-to-short.

We covered switch and swap tags in an earlier post. Switch tells the 1 and 2 receivers on each side (count from the outside in always) to exchange routes, and swap does the same for 2 and 3. When theyre running verticals, it means that they'll exchange lanes upfield. 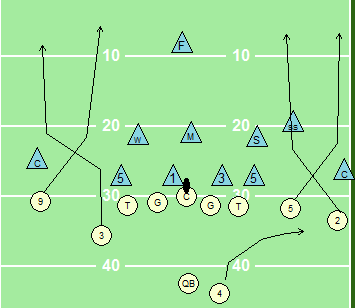 You should be able to see that in certain situations, this can set a pick on a defender playing too close and not paying attention. This can also confuse a young secondary because the 1 and 2 receivers flip, and defenders are taught to count and cover from the outside-in.

Not much complexity here so far, once you teach the tags to the players, you can mix & match tags all day. The tough part is just getting open and the QB making his read progression effectively. However, you can see the different things the defense must prepare for.