This is our first depth chart comparison of the season.  Today we'll compare the Clemson and Troy depth charts as presented via the Clemson University athletic website, www.clemsontigers.com.  I'll continue to give a shout out to RazzMcTazz for previous research and his interest in this work.

Keep in mind as you look through this data that only players who were officially signed were given a "Star Rating".  Players who were not signed could not be quantitatively assessed a recruiting rating.  Such players get a "NA" rating and were not included in the averaged data.  Again, all data was attained from www.Scout.com and www.Rivals.com.  Players whose Scout/Rivals data was not available but were signed were assigned a "NR".  We picked carefully through the data and believe all is correct.  However, if we've overlooked an item we appologize in advance and ask that you point it out so that we can make the correction in our database.

I'll admit, Troy recruits in a "non-standard" format, including a lot of junior College transfers and players who many schools thought would not qualify.  I am not knocking Troy.  I commend their staff for bringing in the talent that wins five consecutive conference championships.  I'll also say that Troy's talent is better than the star ratings credit.

Clemson's talent is, however, much better all around when you consider the incoming star ratings.  Take this for what it's worth, but that is how we stand (data after the jump). 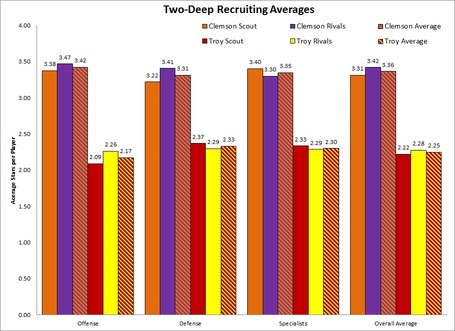