Inside the Clemson Offense: Dropback Passing with Curl Routes

Share All sharing options for: Inside the Clemson Offense: Dropback Passing with Curl Routes

Over the last month we've highlighted the running game in this offense along with the quick passing game, and now for the next month we are going to do some dropback stuff from spread formations that are in this offense. For ease, I'll continue using mostly 2x2 formations. This should carry on until the season starts. We'll do extra as game film becomes available this season.

In the quick game I highlighted the reason why these offenses tend to be called "one read" systems. The QB knows he must get rid of the ball quickly in those plays and his read becomes pretty basic. Usually he need only read the defender on the slot receiver to pick the side he'll look at post-snap. I hinted at some of the complexity in reading coverages for more downfield passing situations as well, but as to not confuse you too much I'm leaving as much of that out as possible for the rest of this series. Sometimes his read changes depending on the patterns run on the play, so it would be useful to refresh your memory of concepts.

Dropback passing from under center usually consists of 5 to 7 step drop plays. The longer the drop, the more time is allowed for deep routes to develop. In the Gun, the drop can be 3 to 5. Usually the QB's read progression is either deep-to-short or from outside-in on the receivers to each side.

A Curl route is a deeper route used by TEs to attack LBs in any coverage and by outside WRs to attack Man and C3 coverage best. Its paired with an underneath route to create a vertical stretch of the coverage, so if the Curl is 10-15 yards, you would run an Arrow or Drag route or an Under route along with it at 5-7 yards. 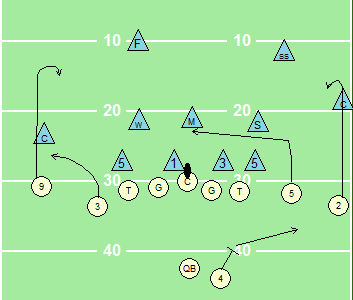 Curls drawn with an Arrow to weak, a drag and then late release from the back on the strong.

In this play, the QB reads the defender on #3 WR from the outside-in. However, the numbering changes as the routes develop and cross each other. Initially, the 4-back (fullback) is the #3 WR strong, but once the 5-man crosses over the middle, he becomes the #3, and the 4-back becomes the #2 WR. This is how defenses account for crisscrossing WRs as well (e.g., the SAM has the #2 here, but the MLB knows he always has the #3 receiver, so the SAM passes off the 5-man to the MIKE).

The QB here is reading the MLB to see if he walls-off the drag route. If he's moving down to wall off the drag, then the QB looks to the defender on #2 (the fullback). In the play above, if SAM comes down to cover the releasing fullback on a swing route, then the QB has a straight shot to the curl route. If the SAM drops at an angle to get underneath the curl, the QB throws to the FB.

If the MLB doesnt move to wall-off the drag, he's either making a drop to a Hook/Curl zone or is taking the FB in man coverage.  If the MLB acts like its man, he'll come down on the FB immediately, so the QB waits and the drag should come open when he clears the spot. In zone, the QB quickly makes his progression read from the outside in or deep-to-short.

The WRs must read the coverage as it develops too. The #1 cuts to a post route at 7-8 yards and at 12-15 yards comes back on the curl. If he reads zone, his eyes pick up the #2 defender, the SAM or WILL. He wants to read how he drops into the zone underneath the curl route. If he drops for depth, you curl a little tighter. If he drops wider, the curl turns inside more. (Technically, the defender is supposed to drop at 45 degrees, but only good ones do that quite right). The #2 receiver strong runs his drag and stops against zone coverage in a hole, otherwise he just keeps running. This carries the outside-in progression read to the other side.

It seems complicated at first glance, but when you realize that he only has a couple of things to look at you'll see that its not as complicated as some make it out to be. He reads the safeties to see 1 or 2 high, rolls his eyes to the CBs to see how theyre lined up, then to the defender on the slot if he can't discern man or zone from the Corner alignment. After that, he looks (on this play) to the defender on the 3rd strongside receiver.

We could add a swap tag to that play and change the matchups for the defense without adding any complexity, or changing the QB's reads at all. The swap tag tells a pair of receivers to swap routes.

It doesn't make so much sense in the play above to just do that, so I'll flip the 3 over and make it a Trips set. 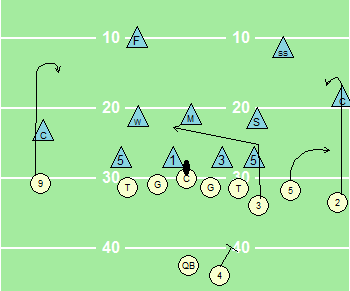 Now how could I make that play just a bit tougher for the defense without making it any harder for my team? I could flip the 3 and 5's routes back, so that the drag route creates a natural rub (e.g., he sets a pick) for the arrow route. That could cause a problem no matter what coverage, but particularly if they lined up in Man. 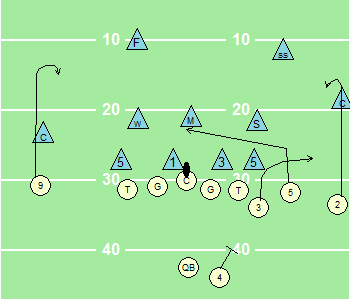 An All-curl pattern works the same as an all-hitch, except that the WR will know to work back down his route if he has to against the coverage. The read for the QB is usually from the outside-in. 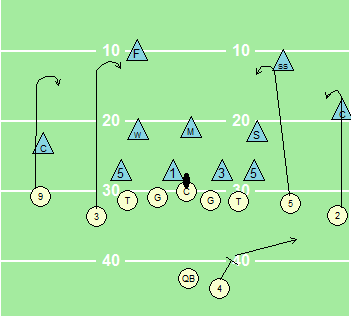 The technique parts come in where you tweak the routes based on the coverage. A curl is still a curl, but the WRs need to read 1 or 2 high safeties and try to split them all with the routes. What I drew above could be C2 or C3. Look at the 5 first. The 5 breaks runs his route slightly inside the deep-half safety if he reads C2 after the snap. If its C3, he'll know to just run straight into the seam between the deep middle and deep-third safety, more straight than veered inside as above.

In the next one we'll cover 4 Verts, one play that Morris really likes.