Inside the Clemson Offense: Stick and Drag Routes

Share All sharing options for: Inside the Clemson Offense: Stick and Drag Routes

There are a few route patterns that are in the scheme that we have deliberately not covered until we get some tape for analysis and during game week we'll be doing scheme posts on an ad hoc basis when time permits. However I thought we needed to cover some simple patterns that are easy completions and don't require tape to explain. One will be this post, and another on the screen packages and their differences.

The "stick" is a pattern where we send a back to the flats on a simple shoot/arrow or bubble route, while an inside slot receiver runs a hook at about 6 yards depth. The idea is to put the defender in the flat zone area in a pickle so he'll have to pick one and give up the other, and the QB takes the easy completion. The pattern is not mirrored on both sides of the formation; its primarily a strongside pass pattern. 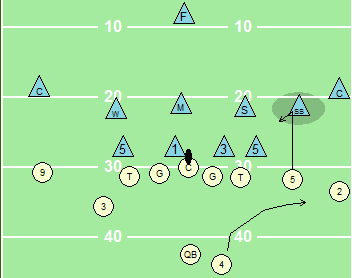 Stick pattern vs a Cover 3 set. Against C2, the read defender would likely be the SAM.

This is a simple one-read play when they play zone defense. The QB looks for the defender over the #2 receiver strongside, in this case the 5-man. If the defender comes down to attack the RB, the QB immediately hits the 5. Against a C3 zone the SS would be on the flat zone, but versus C2 it would be the CB. Obviously the CB is in a better position to attack the flat route of the RB, so we need to put him in more of a bind too. The best way to do that is to send the outside receiver deep, which will force the CB to sink with him. The best choice in the case of C2 would be to send the 2-man on a Post route. 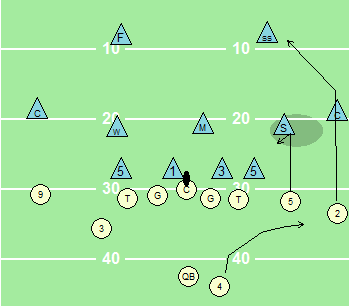 Stick pattern vs a C2 set.

The only time the Post should be thrown, however, is if the Safety comes down to take away the Hook route.

Now, if we assume they can cover the strongside pattern, we need a sufficiently safe and easy pattern to the weakside that compliments this pattern. That is where the Drag comes in, and its a perfect route for the 3-back to run. The drag is just a shallow crossing route run over the very middle underneath or crossing the depth of the linebackers. The drag itself is often patterned with another drag from the other side (e.g., the Mesh Play) but there is plenty of information out there on that topic. One could also pair it with a Dig (deep In) route to sandwich the Linebackers between two levels of coverage, like so: 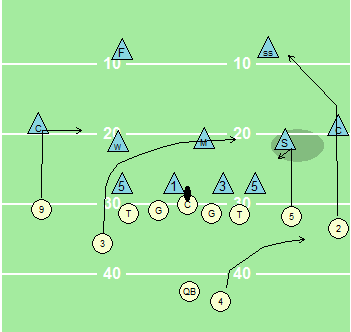 Both of those weakside routes should be simple enough to hit. The 3-back should keep WILL occupied well enough so that he cannot stay underneath the Dig too long. If the defense stays in Man, you'll need a 3-back that can outrun their linebackers. The In route can be a 5 yard cut or a 10-to-15 yard Dig route. If they play C2 and the Stick pattern is covered, then either the Post route or that Drag should get open.

Another easy change to make if the defense stays in Man coverage is to turn the arrow route into a Wheel route. This can be a sight adjustment easy enough to make based on some backfield motion or a word from the QB to the 4-back before the snap. Note that the wheel route needs to get outside the original alignment of the #1 receiver strongside, then cut upfield. 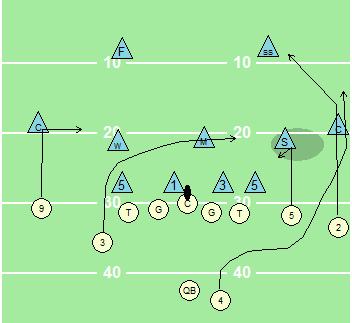 Now I want to flip this play over, and get the Drag route with the better WR, the 5. I'll keep the arrow route in place to bind the defender on the #2 receiver strong, and keep the Dig in place to attack the middle coverage on two levels. 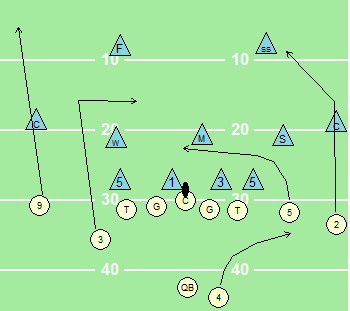 The 9 receiver runs vertically to keep the Safety from coming down hard on the Dig route and the Post route is there for the same reason as before. The Drag becomes a slant if the 5-man reads blitz on his side of the formation. Its pretty easy to see we could add the wheel route instead of the arror route to attack M2M coverage.