You know we are particular about uniform combinations here at STS.  Call me a "Nancy" and tell me that uniforms don't win games.  I am aware of such but still want our team to look sharp when the rest of the country sees us on television.  There are a couple combinations that look dapper and should be used weekly.  Orange shirts on white pants should be worn at home, white shirts and white pants on the road.  Orange on orange at home is a good looking combo with a traditional background and acceptable under certain circumstances.

There are other uniform combinations that make me throw up in my mouth.  Anything involving purple gets an immediate thumbs down from the STS crew (and probably some vulgarity as well).  Whoever decided to revive the purple **cough, cough, Ken Hatfield, 1991, cough cough** should have been fired on the spot.  The purple looks bad in person and even worse on the television screen.

Last summer we discussed the ridiculousness of having nine potential uniform combinations and, worse, using more than 2-3 of these combos.  Those views still are relevant, very true, and we seriously hope that the powers that be will consider the concept of creating a good, consistent, traditional look.  This establishes a respectable national brand for our university. We get these comments some weeks but we also routinely hear Barney the Dinosaur references towards our football uniforms.  But I digress...

Today's article looks game by game through the 2010 season and evaluates uniform selection each week.  Credits for each of the photos sampled can be found at the end of this article.  Most of these links have more photos, so click over if you want to see more pics from last season's games.

Here we see Orange Shirts on White Pants.  Perfectly acceptable and encouraged for home games until we are worthy of the orange britches again.  This combination is sharp and gets two thumbs up from STS. 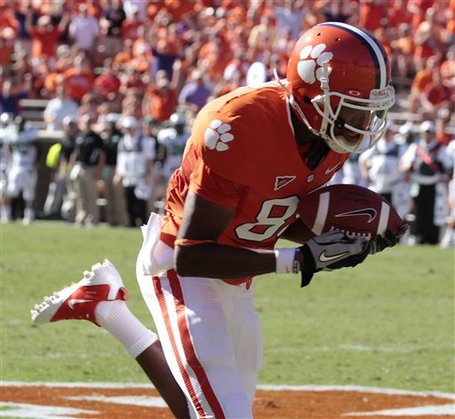 On target, the second game produces the first fashion goof of the season.  We looked flat out ridiculous in this getup. These purple pants have no place outside of a bad Halloween costume.  Orange Shirts on Purple Pants look terrible and this combination should be permanently banned from competition.  This isn't what I think of when I hear "Clemson Football" but looks like a youth league team who couldn't afford new uniforms. 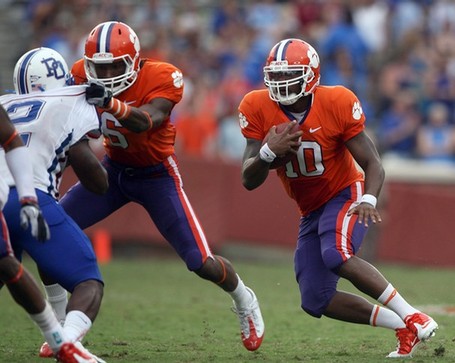 These are the appropriate away uniforms.  White Shirts on White Pants.  Classic look and one that should be adopted for all games played outside of Pickens County.  Well done especially for a featured Saturday night ESPN contest. 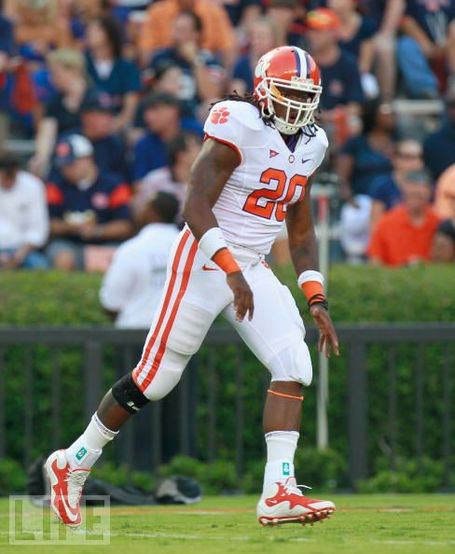 Here we sported an Orange on Orange uniform combination.  Admittedly, this is a stark improvement from the PC game.  However, I believe that the Orange pants should be something special and something earned for big football games at home (and only worn sparingly when the team deserves this privilege).  Clemson has not played well enough to earn these pants.  Further, I am not sure that this game against a middle of the pack Hurricane squad was appropriate.  Looks good but not acceptable for the situation. 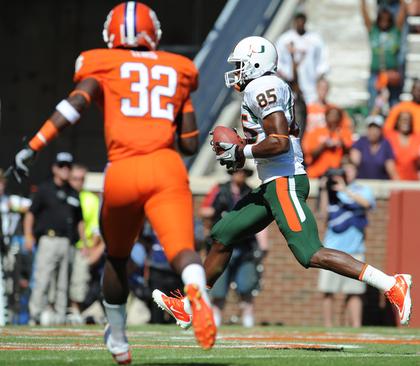 Clemson again broke out the Orange Pants, this time on the road at Chapel Hill.  The White on Orange looked good on television but was inappropriate given Clemson had already lost two games to this point and Orange pants should be reserved for special occasions and paired with Orange Jerseys. 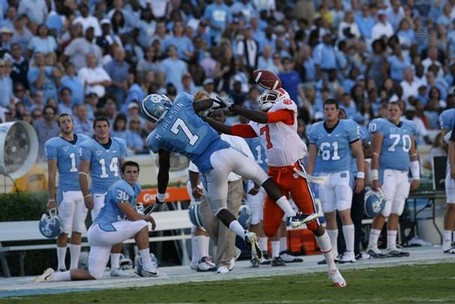 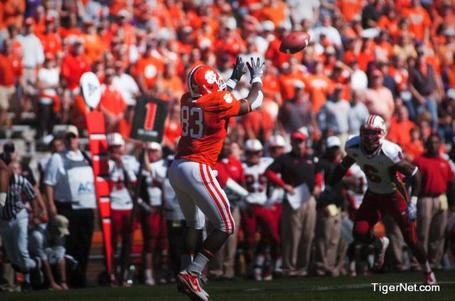 Why? Did the coaches not look at these uniforms beforehand and not realized they looked awful?  Bad combo and even worse judgment embarrassing the Alma Mater in these costumes.  This uniform collection needs to be permanently retired from competition. 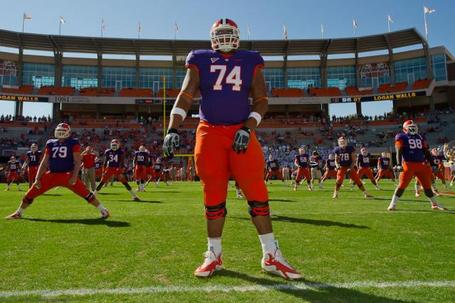 Someone finally got some sense, putting Clemson back in a good traditional look.  White Shirts on White Pants looks good and, again, should be permanently (and exclusively) used on the road. 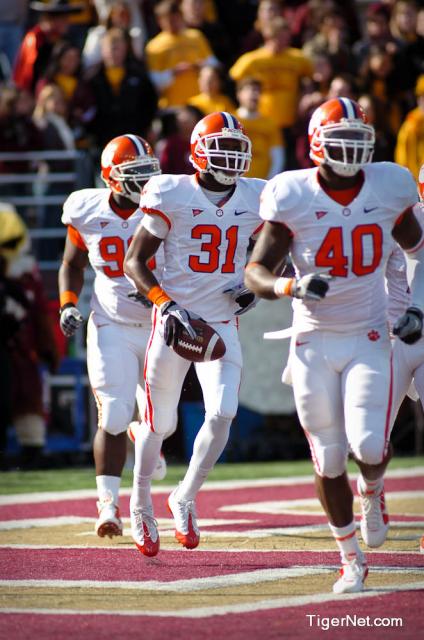 For the second week in a row, Clemson wore the appropriate uniform combo.  Orange Shirts on White Pants at home is the perfect look, especially when you are playing NC State. 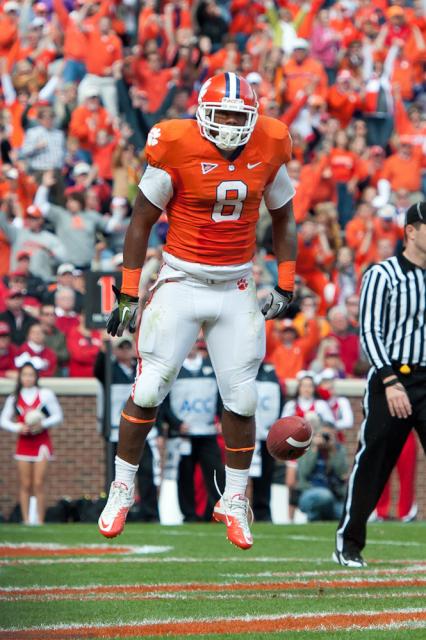 Orange Pants, again, should be reserved for home football.  The FSU game was pretty big and the White on Orange looked good but White/White on the road, please. 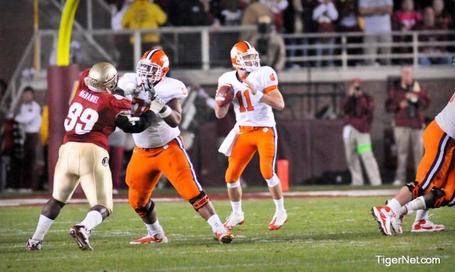 Every time I see purple, I can feel my blood pressure rising.  The white on purple is not a good look and does not fit with the traditional White Shirts on White Pants.  Again, this combination should be permanently retired. 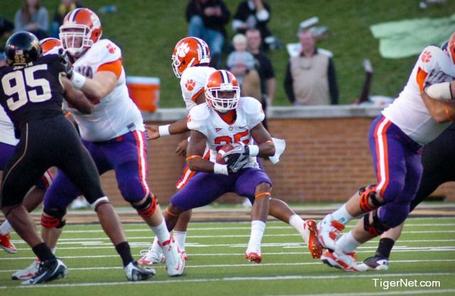 Again, the Orange on Orange looks good, just not when worn by last season's team.  Orange pants used to be a tradition.  Now it is just another piece of the clothing.  Return the tradition and respect the orange britches. 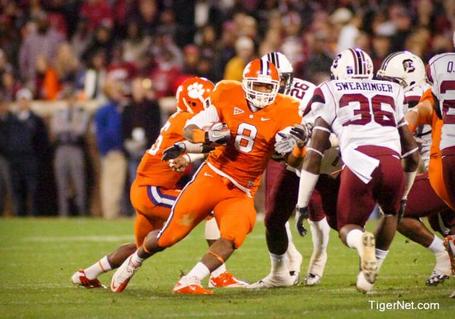 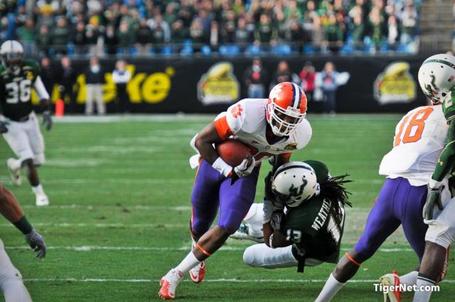