Fan attendance is a discussion topic and is often seen as a reflection of fan support and program success.  Today we will look at attendance figures along with several other items among Clemson University and schools in the SEC in 2010.  We performed a basic ACC attendance comparison before and that can be found here. 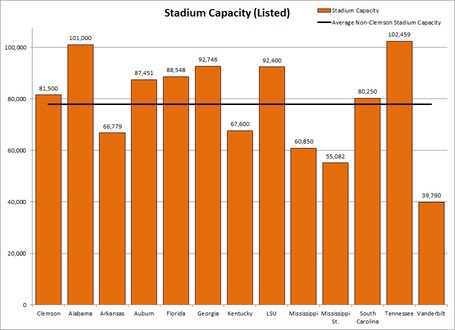 Clemson averaged 77,469 fans per game compared to the SEC average of 76,625.  This equates to a 1.1% higher attendance that than the non-CU average.  Again, attendance numbers for Bama, UT, UGa, Auburn, LSU, and UF dwarf Clemson's numbers and Clemson dwarfs the rest of the SEC other than South Carolina in these figures.  Clemson is the statistical mode for this category and is just above at the statistical average for the SEC data set.  I'll admit that each school may count attendance differently (i.e., some teams count tickets sold while others count the number of people who go through the turnstiles), so slight inconsistencies in this category may exist based on how each count is made. 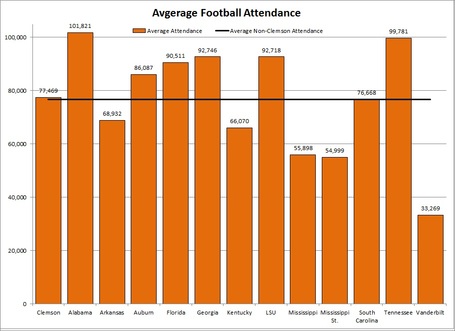 Clemson's 95.1% capacity figure is over 3% lower than the SEC average.  Clemson is ahead of only Vandy and Ole Miss in the percentage of capacity category and is 0.1% behind the Gamecocks.  Five (5) of the teams in this poll had 100% or higher in this category.  We discussed possible differences in attendance counting earlier and this may have an effect on this category as well. 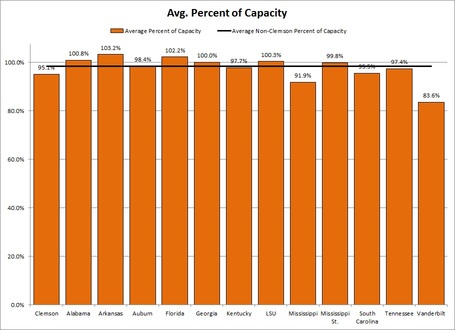 Clemson's enrollment on 19,453 is the second smallest (Vandy has 12,093 students).  The two Mississippi schools also have enrollment numbers in the 19,000's.  The average for the SEC schools is 27,120 students per institution.  Florida, Bama, and Georgia each have over 30,000 students, with Florida being the SEC leader with 51,474 pupils.  Clearly Clemson is much smaller than the majority of the schools in this survey. 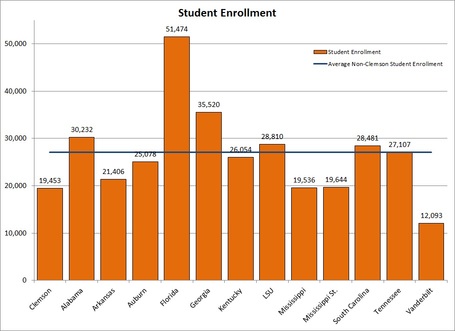 Clemson's attendance per student is 3.98 spectators per enrolled student.  This is by far the highest ratio in the survey.  Bama, Auburn, LSU, Arkansas, and UT all have an attendance to student ratio of 3 or higher.  These schools are all well supported outside of the student body.  This statistic is a reflection of support given to the Clemson football team by alumni and fans in addition to those who attend the school.  We caution you to realize that each school has a different student ticket policy (most are less convenient than Clemson's) but still realize that the CU Tigers' fan base outside of the student population is very supportive. 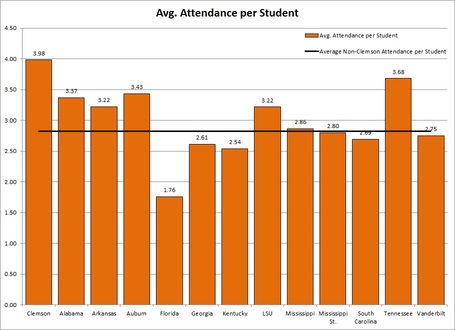 All in all, Clemson held its own when compared to its average SEC counterparts.  CU was clearly way behind the teams who have won a national championship over the past 15 years and UGa in terms of attendance and stadium size.  Against the SEC as a whole, Clemson was average in stadium size and game attendance despite having one of the smallest student body populations in the article.  While Clemson was under the average in percent capacity, the fanbase followed this team to the tune of 77k plus each week.  This was further exemplified by an attendance to enrollment ratio near 4.  Interestingly, Clemson and USC's attendance figures were extremely similar despite the much larger university population and city size in Columbia.  Clemson overall has good fan support particularly considering the University's size.