Inside the Clemson Offense: Method to the Passing Madness

Share All sharing options for: Inside the Clemson Offense: Method to the Passing Madness

Chad Morris’ passing offense is really not very different from any other spread offensive passing system, so highlighting individual plays, aside from preferred coverage beaters (which we will do later), is rather pointless to start. We’d never finish them all. We can tell you though what he and Malzahn both like to do and explain them as we go along.

The passing system doesn’t look terribly different from the Air Raid to me, though the spacing isn’t quite as extreme. He likes to use 4-verticals, he likes drive/shallow combos, Smash, Slant/Flat, and Mesh combinations. Almost everything is play-action so when he tells you "were a run-play action team" he means it. On almost every pass play, I see 2 receivers going vertically and attacking multiple levels of the coverage horizontally and vertically.

Most of these things are in every playbook and what really differentiates our system from others will be the tempo of the offense. We’ll try to cover each of them in time.

What is very different, compared to the Spence system, is the complexity of the reads and sight adjustments. Rob Spence was a former Run & Shoot guy, and when that offense as a single package went out of favor in the NFL because of its problems with the blitz, nearly all R&S guys were looking for a new job or to alter their systems to avoid the public stigma of being a "run & shoot guy". However, the R&S did stick around, and was adapted into more of a "power spread system" in Spence's case that used traps and zone runs along with the power game that the pure R&S abandoned. They just stopped calling it the R&S.

The hallmark of the R&S was on its adaptability to any coverage and defense. In this system, you have multiple routes that can always change, within one play call, based on what the defense shows you. These are called sight adjustments. Examples are called "choice" and "switch" routes, but they are all "option" routes. In theory, the R&S is infinitely adaptable and unbeatable because no matter what the defense shows you always adjust the routes that are run to beat it. In practice, you have to be in the NFL to run this system because you need thousands upon thousands of repetitions to get the QB and WRs on the same page, and time to do it. In college, with roughly 2-2.5 hours per day of practice time total, you can’t run it in its pure form.

Did you ever wonder why we always needed 2-3 years to develop WRs to play? The complexity of the package was a major factor.

Does this look complicated enough for you?

An astute reader will recall June Jones’ success at Hawaii and thus far at SMU, but Jones has simplified his R&S considerably since his days in Atlanta.  That and his excellent ability to teach it are hallmarks of a good coach.

And this, we believe, is the crux of the problem with Clemson’s passing offense for the last several years (a lack of physical presence up front is a separate issue). Spence simplified his passing system from the original R&S, but not enough. For example, when two or more routes per play adjust from a Post to a hitch because the defense happens to be aligned in a Cover 3, you are going to have problems. One WR won’t make his read of the defender on him properly, or the QB will read C2, and he has to take his checkdown – a damned bubble screen.

I’m not saying these routes are necessarily bad, and I am being simplistic and exaggerating a bit deliberately. Most passing offenses do still keep a sight adjustment on each play. The play always needs some kind of answer for a surprise or a blitz. Spurrier’s system uses one sight adjustment. Malzahn’s uses a single sight adjustment, and so does Morris’. Now instead of having multiple sight adjustments based on the leverage of the safety or his position, we have only one.

For example, you call the play below and let the outside receiver on the strong side make an adjustment to his route based on the leverage of his defender. If the defender is playing him to the inside, he won’t run his In route and runs a skinny Post route instead….thats it. Everyone else runs the assigned route. The QB has to make the same read of defender leverage and this is one of the pre-snap reads he must be able to make, but he doesn't have to read the leverage on each defender and think about where everyone is going to be. 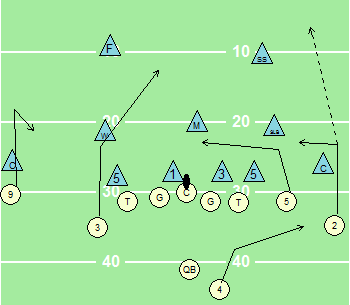 Note that we’re not talking about audibles. Sight adjustments don’t override the play call. They are built into it.

In the interest of getting through most of what we want to cover before September, we are going to start by breaking down the basics of the quick passing game in a very simplistic manner. After that we’ll get into more dropback passing. You’ll have to have read and understand our terminology on the Passing Tree because we’re not going to reinvent the wheel each time, and they will for the most part need to be read in sequence so we can build on each previous article to show how one gains a complex look without actually being complex at all to teach.