Clemson comes into the 2011 season with some uncertainties at the running back position.  The Tigers have experience returning in Andre Ellington, Roderick McDowell, and Chad Diehl.  Returners from last season's squad are listed below and statistics from '11 shown below the returners.  Here is how we graded this group a nd former backs coach Andre Powell over the winter.

Since the bowl game, Clemson replaced Powell with former Clemson wide receiver Tony Elliott.   We have heard a lot of positive things about Elliott as an assistant (particularly from HS coaches around the Southeast).  As we've noted here, the running back position is about the easiest to coach so the ability to recruit is a major part of the job.  In terms of in-season items, Elliott's Clemson degree is in engineering so don't expect him to spout out moronic items to the media like his predecessor.  We expect Elliott to recruit better than Powell and do not foresee any in-game performance drop off due to the staff change.

There was some attrition from a season ago.  Jamie Harper made the poor decision to leave school early and enter the 2011 NFL draft.  Harper was a capable pass catcher but didn't run hard and had a habit of tiptoeing around in the backfield.  Further, he gained a substantial amount of weight during last season and was not the best back on the team until Ellington's injury in last October.  We repeatedly questioned the high number of snaps and carries Harper received because we thought Clemson should have featured Ellington instead of splitting his carries with Harper.  Losing Harper removes a lot of experience but won't significantly hinder the 2011 Tigers based on historical performance.

Here is our post-Signing Day assessment from a numbers standpoint:

RB - Jamie Harper decided to leave early and quality depth was a serious issue in 2010. Daniel Barnes was on scholarship last fall and is gone. Clemson essentially played with only 2 RBs and just one in the 2nd half of the year. Andre Ellington comes back and McDowell will start out as #2. Andre is to be a Jr this fall. D.J. Howard comes off a RS with Demont Buice. You really need 3 to play with here at this oft-injured position, and to take one per year. Clemson got Mike Bellamy, who will not redshirt. That's 5 players for only 3 true spots. Bellamy may end up getting the #2 spot and someone else will be moved. Clemson filled the need at RB perfectly.

Clemson returns six (6) backs from last year's team including fullback Chad Diehl.  Of the six, Andre Ellington is the best of the group and ran the ball well last season before sustaining a foot injury in Chestnut Hill.  We'll be eager to see if/how Ellington's recovery from December's corrective surgery affects his ability to run the football.  AE claims to have fully recovered which is very positive.  Ellington will be the feature back this season and will have a 1,000+ yards if he is healthy and averages 20 carries per game.

Outside of Ellington, Clemson lacks players with significant game experience.  Roderick McDowell had 32 carries with the majority of these carries coming in blowout wins.  It's been widely speculated that McDowell was in the coaches' doghouse for the majority of '10.  Chad Diehl played well as a blocking back and will be used as such this season.  That's about the extent of our experience.  Clemson returns D.J. Howard and Demont Buice who both redshirted last season.  McDowell, Buice, and Howard battled for the #2 depth chart spot coming out of Spring drills.  They will be competing with incoming Freshman Mike Bellamy for playing time this Fall. 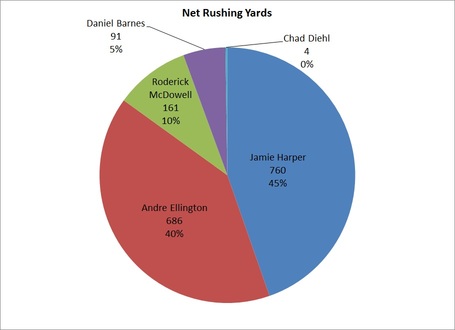 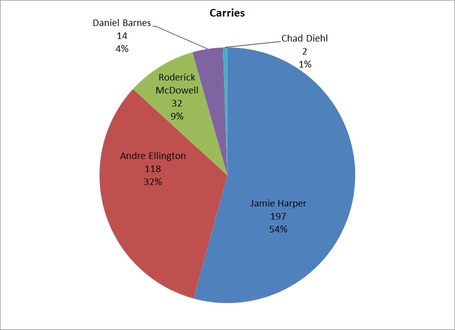 Highly touted Mike Bellamy (Rivals 5-star from the Sunshine State) is the lone incoming running back freshman.  Most people around the Clemson program expect Bellamy to come in and immediately compete for playing time.  Bellamy is very fast and extremely talented.  Here is what we said when he committed last summer:

Absolutely huge commitment. Currently he's rated as the #3 RB nationally in the Rivals 100. He can fly, he's great in space, and will be a dual threat out of the backfield. I'm a little surprised he's not a 5-star player but Rivals is not handing those out this year so much. Per Scout, he's a 5-star and #5 nationally at RB.

From film I've seen and first hand reports from those in the HS recruiting know, it is completely reasonable to expect Bellamy to be #2 on the depth chart early in the season.  He has world-class speed and is excellent in open space.  His speed and agility sets up beautifully for big, big plays in the open field.  Bellamy needs to bulk up a little to be an every down inside the tackles back but will see the field in some fashion, be it on offense or special teams.  Bellamy also is a very capable pass catcher.  We wouldn't be surprised to see Bellamy motioned out of the backfield and featured in the passing game.