Share All sharing options for: Inside the Clemson Offense: Quick Passing III

We have covered the basic hitches, slants, double moves, arrow and wheel combinations, and laid out some basic stuff for reading coverages along with how we adjust to the coverage with our alignment. Hopefully you can see now, or at least have an idea of, how any offense is installed and run. The next couple of routes we want to hit in the quick passing game are basic In and Out routes. They are both fairly easy routes to run and complete, and in the quick game that is all that really matters. We just want to move the ball here. The goal might be to score on every play, and coaches always say that, but you do just need to be able to grind out yards and put the team in a position to score on the next play too sometimes.

In and Out routes are key against Man coverage teams, just like any other kind of crossing route. In the quick game, the read is just the same as before. The easiest completion is the short route and the closest receiver to the QB, so the QB looks to the slot receivers and tries to find the best leverage advantage he's got on a defender. 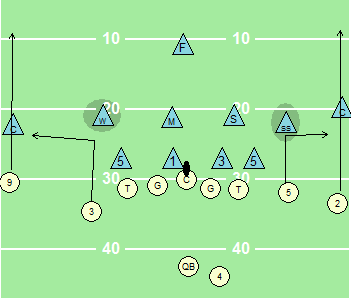 Note the leverage of the circled defenders, who has further to go to make a  play on his receiver?

The QB looks for the best advantage he's got on a defender on the #2 receiver to each side (counting outside-in). So in this case, in a 2x2 regular set, he's got the 3-back (Tailback) and 5-man. You can see the 3-back has the advantage in leverage on WILL pre-snap, so the QB picks that side. The D is playing 1-High, so its either C1 or C3. In either case, the CB is going with the #1 receiver deep, so the flats should come open.

The #2 receiver runs a basic 5 yard out-route. 4-5 hard steps towards his defender and then plant and cut hard outside and sprint. His hands should come up immediately for the ball.

The #1 receiver runs either a Fade or a Go route down the sideline and will probably not get the ball unless he can sprint by the CB in C1 or C3.

If the defense switches to a C2 Zone, then the CB has the flat and the FS/SS have deep halves. In that case, the #2 receiver on each side is running right towards the CB after his break. Its unlikely he'll get open then. In this case, the #1 receiver should be able to get behind the Corner, and be open for an instant before the deep safety can get there.

So you see the primary pre-snap read is the same as other quick game plays and just based on their leverage. In the example I've given, the ball goes to the 3-back unless the QB reads the CB dropping into flat zone coverage after the snap, and then he looks deeper for the 9 who should be open. If he can't get it to either, then he should take his checkdown.

In a 3x1, 4x1, or 3x2 set, we wouldn't run two Outs (or In) back to back. We would rather use someone to really push the coverage deep and also we don't want to have two receivers running routes into the same space, which often happens. 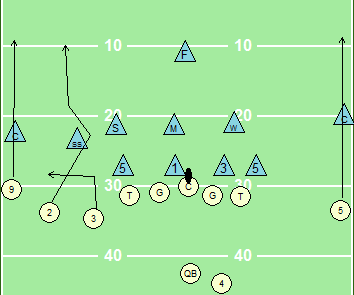 In this 3x1 set, called 3 Left in Morris' simple terminology, the 2-back shifts left in motion and the 5-man moves to the boundary. The D is showing 1 High, so its either C1 or a shifted C3. The leverage read doesn't really work here anymore. Its a quick-game play, so I want to get the ball out and to the 3-back (now the #3 receiver). He might not come open if its M2M, so I tweak the route of the #2 receiver (2-back here) and have him set a pick for the #3. I also shorten the 5 yard out to an Arrow route or just a 2-step Out. In the above diagram, #2 charges hard inside, gets across the face of the SS, and the #3 should come open. #2 should then cut back out to his original alignment width and go deep.

If its Cover 3, then we can force a problem for the CB/FS there by having 2 deep routes. One should get open. If its C1, then the rub should get the #3 receiver open.

In most 3x1 sets, you get natural rubs (pick plays) like this often.

Now I want to add another tag to the 1st play above. Instead of a Go-Out combo, I'll call a Switch tag on the play. This flips the routes the #1 and #2 on each side run. Thats all.

To make it a little more interesting, i'll call my Go-Out Switch and change the Go to a Corner route. 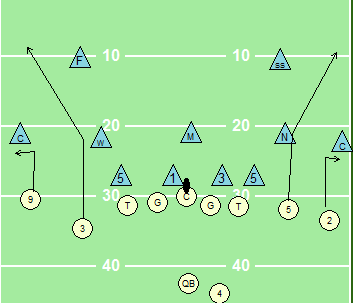 This would work just like the Smash combo (Corner-hitch). Its a Cover 2 beater. The alignment tightens up outside, as I mentioned in the last post, so the #1 and #2 are closer together than usual. The QB picks the side based on leverage of the #2, so in the above diagram it would again be the 3-back. The #2 receiver pushes hard upfield, then at 7-10 yards he cuts 45 degrees to the sideline. The #1 just runs the 5-yard quick out.

Against C2 Zone, the CB gets sandwiched and the Safety has to hustle to get over there. If the CB drops to help, the Out is open. If the CB jumps the Out, the Corner route gets open.

The In route can be used in all the same ways as the Outs. We'll use a 5 yard In route (a 10/15 yard In is called a Dig) coupled with another route that goes outside or deeper inside. 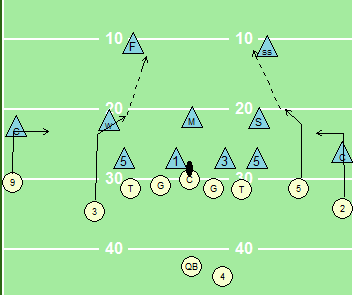 Above I've paired the In with a Slant, that becomes a Post tag. The read on the inside receiver changes a bit. We still want to pick the side with the best leverage advantage, so the QB would pick the 5-man. After the snap, he still reads the SAM backer. If the SAM sits or widens, the slant gets open and 5 gets the ball. If the SAM backpedals at all, the 5 pushes him deeper on a Post, and the In route gets open underneath.

Just by looking at the Smash and Corner-Out play above, you should be able to see how we would do the same thing with the In routes. I don't have to go over it, and neither do the coaches when they install it, but the defense would have to prepare their Corners to be sandwiched between Corner-hitch, Corner-Out, and Corner-In. Thats 3 things he has to know to cover your guys and not much for you to teach beyond how you do the switch calls.

Next I think we'll do one on mix & matching combos to attack teams that play 2 coverages most of the time.