Returning starters are often critical to a team's success from one season to the next.  Below we show expected returning starters from 2010 for all ACC football teams' offensive and defensive units.  These numbers are following Spring drills, so kindly correct me if there are inaccuracies. We'll be using these items and other similar, pertinent data more when we get into football season.

I'll admit, these numbers were ganked from a series of blogs by ESPN.com's Heather Dinich who additionally provided a good but generic overview of each ACC team following Spring practices.  For some reason, I got sloppy and failed to put article links in the table below so you'll have to do some legwork if you want to know what she said about these teams.  Here is the Clemson link to get you going, if you need it.

The numbers show Clemson returning over 70% of last season's offensive starters but a mere 45% on defense.  Intuitively, you would expect improvement from the offense and a defensive drop-off.  We have discussed these items here before and fully expect a decline in defensive performance (losing Bowers and a lot of key secondary contributors will take its toll, especially early).  The offense is a wild card.  It was pathetic last season so it would take little to improve this year.  Clemson also installed a new offense that should simplify things so, yeah it's new but it shouldn't take receivers three years to figure it out.  Again take that one for what it's worth.  And now, the numbers: 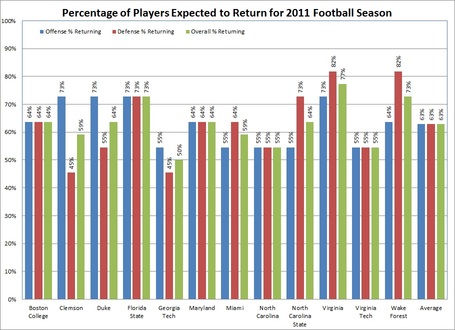