Share All sharing options for: Inside the Clemson Offense: Quick Passing II

Beginning where the last post left off, I'm going to build on the quick passing game and keep showing how things build up on one another when you install an offensive system. Note that we're just talking about the quick passing game, which doesn't necessarily mean that you're in a HUNH offense by itself, but simply plays where you want to get the ball out of the QB's hands as quickly as possible.

We diagrammed an All-slant pattern in the last post, so the next popular route combo is the Slant-Wheel. The inside WR will run a wheel route outside, and the outside WR runs a slant over it. Sometimes, particularly when the defense plays a pressure coverage, it becomes a pick pattern, where one WR will set a pick for the other.  Wheel routes are good to use when you get a mismatch with defenses that play a lot of M2M coverage, but its also a problem for C2 Zone teams that really play a hard cover 2, because it can eat the pressing CB up.

The wheel route here starts as an arrow route, and he sells that initially, only to turn upfield after 5 steps. The outside WR runs a slant. 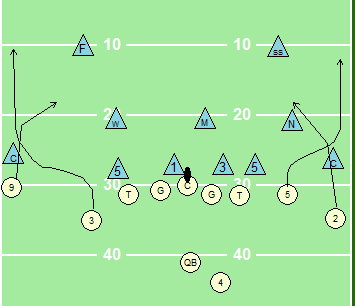 The QB does the same as before, he looks for the best leverage advantage for the inside WR. You can see the way I've drawn it that the 3-back has the advantage on WILL. The WLB is cheating inside and trying to cover his run gap as well as being in zone position to help on the 3. The QB sees it, and picks the 3 as the receiver pre-snap.  After the snap, the QB pump fakes to the 3, because that helps sell the arrow route he starts with, then resets his feet and hits him going down the sideline.

If you assume that the coverage is C2 Zone, the CB can be caught in no-man's land here. A Corner in hard Cover 2 zone has the flat zone, with WILL playing a hook/curl zone. Ideally they would just trade off 9 and 3, but if the CB goes with 9 an extra step, the 3 can get behind him before the FS can help. If the WLB pushes hard on the 3, and 9 goes inside quickly, he'll come right open behind the LB like so: 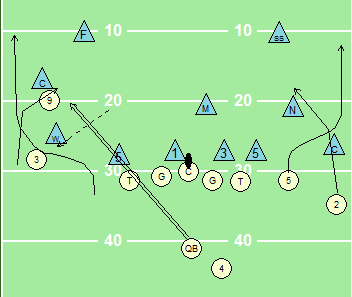 9 just has to be sure to get his inside release to make that work, he'll need to get physical. The first preference to hit on this is going to be the wheel route though.

Now lets tweak the play for a 3x1 set. With Trips to one side, you don't want to run two slants, but instead use the extra WR to pull the coverage deeper and leave you the slant route as a safety valve. Against a Cover 3 defense, we'd run him up the seam in a Go route, between 2 of the 3 deep. Another option would be to run a Post or skinny Post. 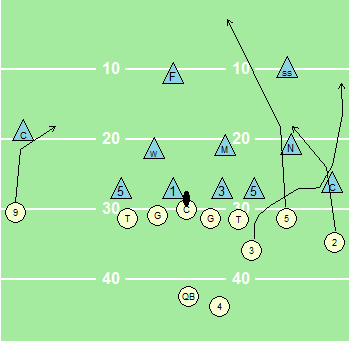 The wheel should be run by the innermost receiver in the set, and the Go or Post tag would be on the one in the middle. You can see above that the defense shifts to the Trips side (actually Quads but i'm not counting the 4-back). The ball is still meant to go to the wheel route here, the 5's Post is just a clearing route to pull the coverage back.

Another combo that is easy for you to see is a Slant-Bubble where the bubble route is substituted for the wheel. The QB wouldn't have to do anything different, we just change the route.

In the next post I'll touch on reading coverages and the Arrow combos that Morris loves to run.