Share All sharing options for: Inside the Clemson Offense: Inverted Wishbone Plays

We previously discussed some of the philosophical ideas behind the Inverted Wishbone formation.  Keep in mind that the core advantages gained through this formation include the potential presence of a lead blocker for each play, the opportunity to create confusion for the defense, and the ability to successfully throw the ball from this look.

I'll point out that you can run a wide array of plays out of this formation.  All I and Power-I formation plays are obviously available.  Isolation, traps, draws, sweeps, and counters are available in addition to the ones we've sketched out below.  A variety of play action and pass plays are useful out of this set.

This one will be blocked the same as any inside zone rushing play.  The backside up-back blocks backside pursuit and the playside up-back leads for the tailback.  As in all zone blocking plays, the tailback has the option of making one cut against the "grain" due to the potential double between the center and playside guard.  The ball carrier is scanning from the backside A gap to the playside B gap.  Ideally he will follow his lead through the B gap. 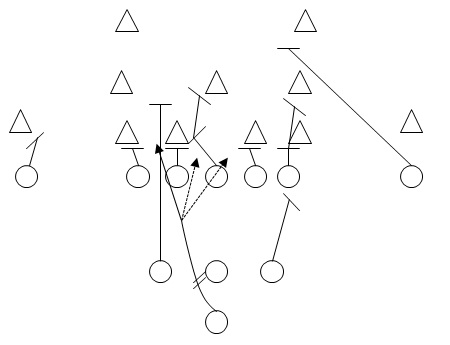 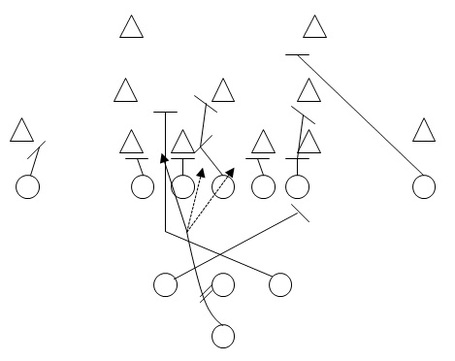 Outside zone plays are also common out of this play.  We'll show two below.  The first makes the tailback the ballcarrier, with the playside up-back providing the lead through the alley.  Notice this looks very similar to the old stretch play out of the Ace formation only we've substituted a lead back for the chipping TE. 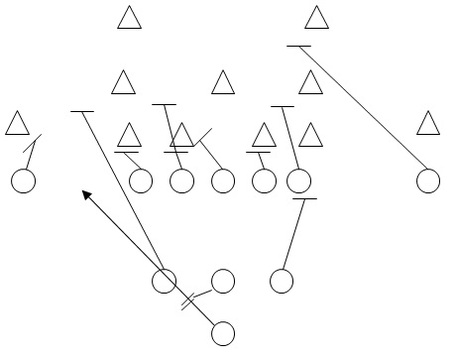 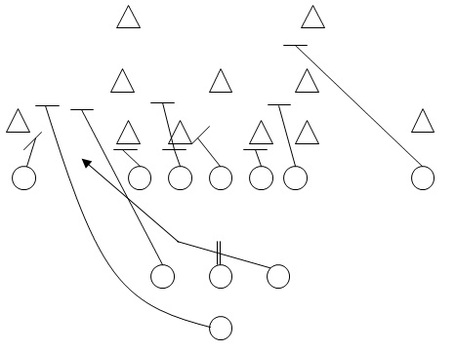 Yes, you can definitely run the Power out of this formation.  It looks just very similar to other diagrams we have put here for the Power-O.  The backside up-back could either be involved in an underneath play fake or sprint to the flats to cause defensive confusion or help with backside blocking.  Otherwise, this should look very familiar. 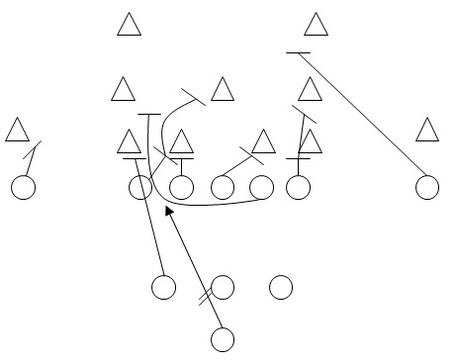 We discussed this play at length a couple weeks ago here, so I plan to hit the high points and simply show the play.  The inverted veer is a playside DE read where the backside up-back runs sweep action to the playside.  Both the playside up-back and the tailback provide lead blocking on the perimeter.  The playside DE is left unblocked.  if he attacks the sweep action, the QB keeps the ball.  If the DE sits and plays the QB, he'll hand off to the sweeping up-back. 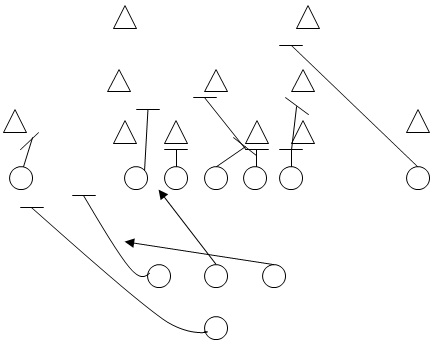 A common variation to this play is to pull the backside guard to potentially lead the QB through the hole.  You'll notice this looks, up front, very similar to Power. 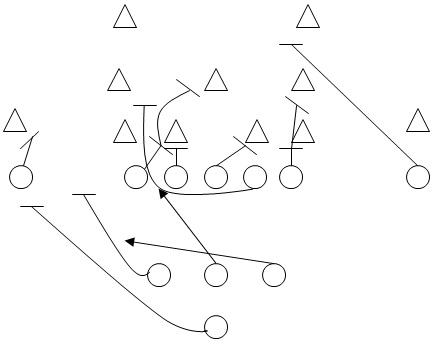 Offenses can run a variety of PA plays, particularly downfield routes to pressure a defense that may/should be keying on the run.  Below we show basic play action off of the same backfield action shown in the Inside Zone play.  This is designed to pull the safeties in to provide run support.  Both receivers are running fade routes against a cornerback who is on an island because, via play action, safeties are out of position to provide deep support.  The backs are all shown backfield blocking.  These guys will release in the flats or across the field to provide an outlet for the QB if necessary. 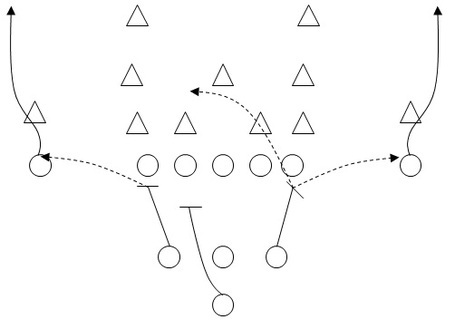 This move gives you the basic two man route.  The playside up-back shores up the perimeter and the other back run outside zone.  Tulsa, in the clips shown later on, pulled the playside guard to shore up backside pressure.  The backside WR runs a fade well to the outside to clear anyone deep on that side.  The fake-side WR runs a skinny post.  The key to this play is great play action to freeze/engage the fake-side safety.  A freeze here and good inside position by the post receiver gives the offense great position on the deep ball. 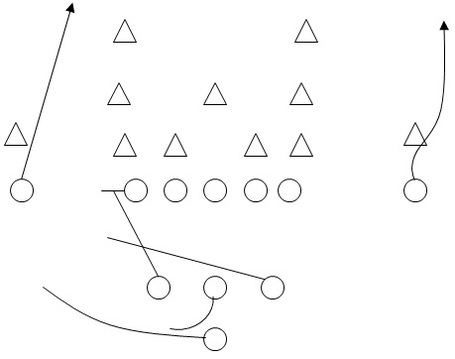 We'll use the backfield action shown above that utilizes the backside up-back as the ballcarrier.  The tailback and backside up-back carry out the fake as though it were the actual run play.  The playside up-back will give a decent fake to freeze/provoke the OLB/Safety crashing down on the run.  He will then run a wheel route behind the LB/S providing run support.  The playside WR wants to run off the corner either via a fade or post.  The backside WR will press the corner on a vertical route or will get to the middle of the field on a post or dig route. 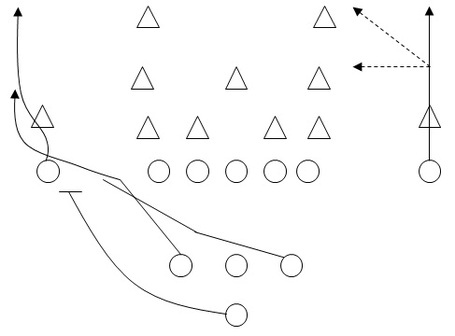 This play uses the inverted veer action and again relies on a good play fake to suck in a safety.  If a safety bites or even freezes, you have one on one down the field. 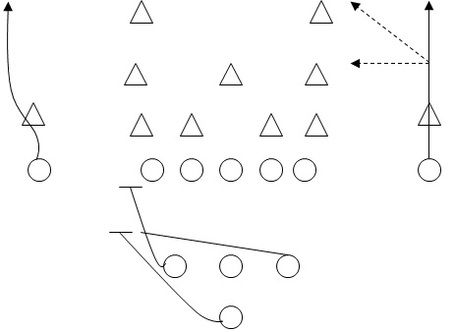 Everybody loves the waggle and yes, you can get waggle action out of this formation.  The easiest way to get waggle action is to cross the one up-back and fake what appears to be outside zone/stretch action with the other two backs.  The crossing back should freeze the end and the play fake should create flow away from the waggle.  The waggle-side WR will clear the corner by running a fade.  The crossed back will drag/quick out into the flats.  The backside receiver runs a 12 yard dig/post.  Under normal situations, the first read will be to the flats, next the backside WR. 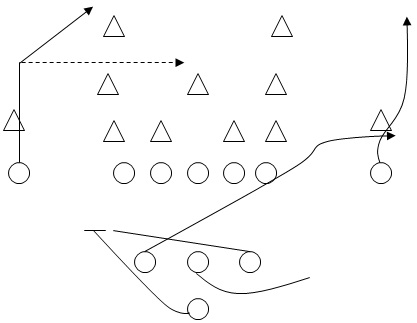 I expect to see a variation of this play that motions the waggle-side up-back into a wing position.  He'll then participate with a drag all the way across the field. 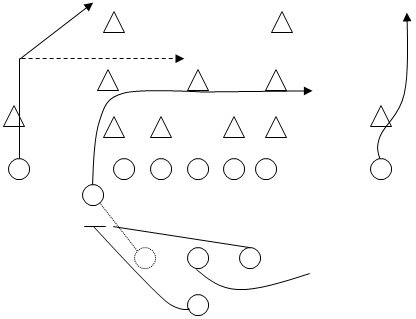 As mentioned earlier, linebackers are often placed in bad pass support position due to the need to cheat against the run.  Offenses will run the up-back to soft spots in the defense.  These are commonly exploited through curl routes and out/speed outs in the short to medium passing range.  These routes can be performed by one or both of the up-backs with the tailback staying in for pass blocking support.  WR's run either an Up route or a Stop/Comeback here. 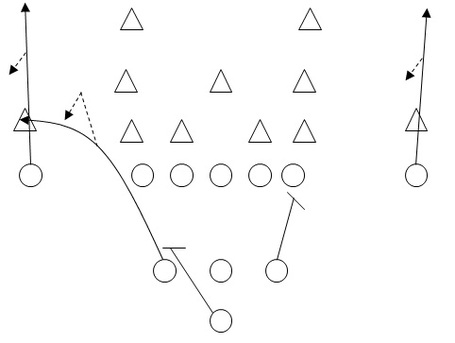 Here is a cut up Dr. B put together of the Inv. Bone from Tulsa's bowl game against Hawaii last season.

And another involving Oklahoma/Oklahoma State.