Inside the Clemson Offense: The Wishbone to the Inverted Wishbone

Share All sharing options for: Inside the Clemson Offense: The Wishbone to the Inverted Wishbone

The Inverted Wishbone, also commonly referred to as the "Diamond Formation" is a hybrid three back (plus QB) set that derives its name and many base concepts from the Wishbone offense.  This formation gained popularity over the past couple years.  We obviously saw it with Chad Morris and Tulsa last season.  Dana Holgorsen fooled around with this look at Oklahoma State and in-state rival Oklahoma used this formation in both run and throw the football.  Chip Kelly & crew out used unique variations of the 'Bone look en route to last season's National Championship game and TCU incorporated this look en route to a Rose Bowl victory last season.

In order to fully understand the formation progression, we'll use this article to describe the original Wishbone information then transition into the Inverted Bone.  Due to excessive article length, what's shown here will mostly involve philosophy and will be followed by a separate post on specific plays we expect to see/are common to the Inverted Bone.

The Wishbone, or simply the "Bone," formation is shown below (thanks Wikipedia).

This formation utilizes three running backs (a fullback and two halfbacks) and got its name from backfield alignment.  The fullback lines up directly behind the QB/Center with the halfbacks behind and to either side of the fullback.  This arrangement resembles the "Y-shaped" furcula bone found in birds.  Notice the above illustration utilizes two wide receivers.  It is also common to see one WR and a TE with this backfield alignment.

Coaches in the ‘50's adjusted the "T" formation, moving the fullback closer to the LOS so that the FB could get in the play quicker.  This variation is commonly referred to as the "Morning-T."  The modern formation/philosophy was devised by Texas assistant coach Emory Bellard in the late-‘60's during his time with the legendary Darrell Royal.  The formation evolved after Royal challenged Bellard to create an offense featuring three backs and provided for a lead blocker.  Bellard began by placing three backs in the backfield then combined aspects of Bebes Stallings Texas A&M slot-I option with basic veer concepts.  The result was a formation conducive for the lead triple option.

Royal at Texas, Paul Bryant at Alabama, and Barry Switzer at Oklahoma popularized the ‘Bone offense, each winning multiple National Championships utilizing this scheme.  Switzer is credited as the man who perfected this offense.  Oklahoma averaged a record 472 yards per game on the ground in '71 and scored over 500 points twice under Switzer-led Wishbone rushing attacks.

The wishbone paired with the triple option philosophy is a great size equalizer.  We have discussed option/veer techniques and how to defend them here at STS in the past, so I won't get into the gory details but will summarize.  The first option is the fullback dive.  If the defense respects the dive, the QB pulls the ball and moves parallel to the LOS.  The DE is strategically left unblocked and the QB will read him.  If the DE attacks the QB, the QB will pitch the ball to a trailing back (Option 2).  If the DE attacks the trailing back, the QB tucks the ball and turns up field (Option 3).  The third (lead) back will attack a secondary defender at the next level.  Because defensive players are deliberately left unblocked, an extra offensive blocker is available to get to the next level to set up a big play.

Thanks to www.coachteed.com for the following: 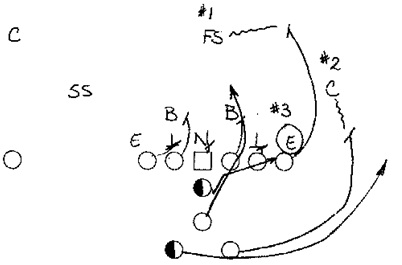 Here is what the triple option looks like when run properly:

The Bone allows for option variations.  It also allows for basic power plays plus counters and traps if the defense begins to cheat players.  This scheme puts a lot of pressure on the defense in run support (particularly on the safety and/or safeties), commonly leaving receivers in favorable situations.  The real beauty of this scheme is that it creates one-on-one and one-on-none situations if executed properly.

Over the past half-decade or so, more college and pro teams have integrated three-back, Inverted Bone sets into basic offensive schemes.  You'll probably recall the Packers extensive use of this position last season en route to their Super Bowl victory.  The Inverted Bone positions the player in the Wishbone's fullback position between and behind backfield split-backs.  This deep back is typically seven yards off the LOS and the up backs depth depends on their offensive function/utilization.  The base diamond formation keeps the QB under center.  Plays from this set are commonly used for runs inside the tackles, some misdirection, play action, and roll outs.

The original Inverted Wishbone, Full House, or Diamond Formation is shown below. 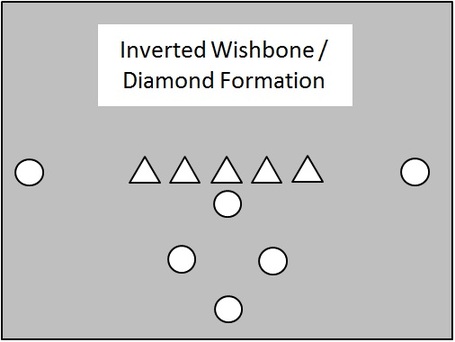 The Zone/Lead play the Packers ran successfully is shown below (thanks NBC Sports). 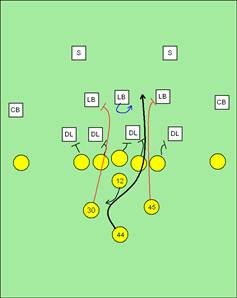 There are several advantages to using the "Diamond" formation.  The first and most obvious involves having an extra blocker in the backfield.  The positioning of either up-back provides a powerful backfield prepared to take excellent angles toward the blocking target.  The blocker sees everything in front of him and has a running start attacking the defender.  Up-back positioning sets up carries between the tackles very well, providing an excellent opportunity to run the lead to either formation side.  By balancing the formation, the defense cannot cheat to a strongside and must bring extra men into the box to counter the three back look.

The second big item is personnel groupings.  Teams who have good backfield players/tight ends and don't necessarily have a great wide receiving corps began using this formation to get their best players on the field and create mismatches with these players.  The Inverted Bone's natural running formation forces defenses to put eight men in the box.  This allows teams to get one-on-one coverage with an up-back out of the backfield.  Typically this sets up an athletic tight end / strategically placed speedy back against a linebacker.  Wheel routes (off of play action) out of the up-back position(s) are extremely popular out of the inverted wishbone.

Also remember that the inverted bone has the same rushing advantages as the wishbone:  a lead blocker (or two) is always available and a multiple ball carrier scenario is present on each play.

Introduction of a Direct Snap

Coaches eventually began utilizing a direct snap to the QB with backs in the Inverted Bone formation.  The result was the QB in the Pistol formation flanked by backs on both sides and a deep back behind the QB.  This allows for more Dash, Inside Cross, and Power plays as well as some reads traditionally associated with the old Wishbone offense.

Here is the base Inverted Bone utilizing a direct snap: 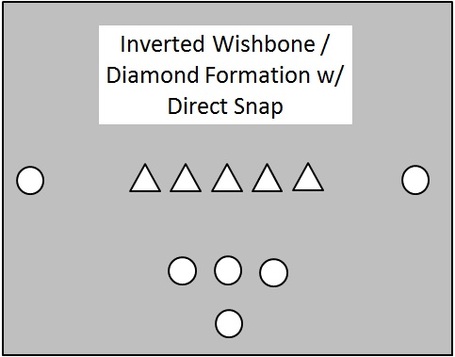 The Pistol version gives the offense the rushing advantages of the standard diamond formation and provides a more formidable passing option via the direct snap.

Please note that this is a formation adjustment.  This doesn't change fundamental schemes and techniques.  It does create strategical scenarios via the three-back gun formation.  You'll see basic run plays that are not unique to this formation and the advantages in the run game were outlined previously in the Wishbone and Inv. Bone (under center) summaries.

This formation creates scenarios that should open up passing opportunities.  With three backs between the tackles, the defense is forced to put extra men in the box to defend the run and/or crash the safety(ies) in run support.  This puts more stress on the defensive backfield (safety position in particular) and creates more opportunities to isolate receivers on defenders with no help over the top.

Hot calls are available, depending on defensive alignment, particularly if the upback is also a good receiver (i.e., an athletic TE like Dwayne Allen).  An Out or Curl/Comeback route is a common adjustment when a defense positions all its second level defenders (shown below, linebackers) inside the tackle box.  These routes utilize strategic formation alignment to create a mismatch between the upback and the linebacker responsible for this player.

Here is an example of what will trigger the audible/hot read. 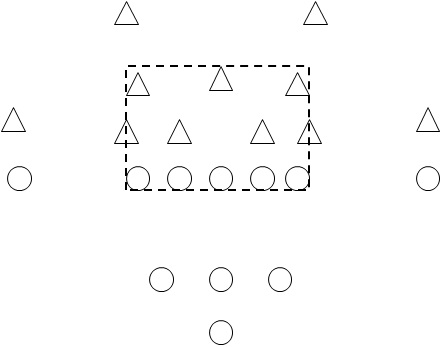 This look attracts either Cover 2 or a variation of man coverage underneath.  This means the OLB shown above either takes a drop and plays zone or is in man coverage against an up-back.

Against the Cover 2 look (shown in the left-hand portion of the figure below), the up-back will push the linebacker and run a comeback/curl route in addition to the traditional Cover 2 killers (i.e., flag/corner route).  The LB's exaggerated inside alignment puts him in poor position to adequately cover his zone.  Further, if pushed to open his hips, he will not be able to make a play on the comeback route.

The up-back wants to get outside against a man look.  We show below a speed out with the potential to continue this into a wheel route.  The logic is simple, the LB is cheating inside.  You hope that your up-back is athletic enough to beat him to the outside and potentially get up field for a monster gain.  You may also see a deeper out route that takes a little longer to develop used as well for the same reasons listed previously.  Keep in mind that a curl or comeback route will be open as discussed above because, again, the LB begins out of position. 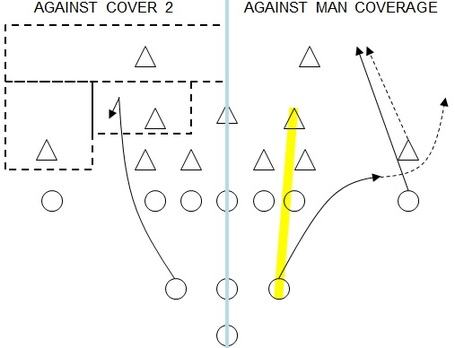 The final portion of the passing game is the play action.  Because this sets up as a running formation, play action is an excellent choice from this look.  We'll see a variety of routes by both the receivers and backs from PA,but the two biggest concepts are WR's stretching the field and backs getting to the perimeter.  Backs to the perimeter rides on the same concept described earlier.  The LB (probably covering the back) will freeze on the play action and should be out of position covering a back out.  The WR portion comes with freezing the Safety.  Without Safety help over the top, you get the one on one matchup desired for stretching the field and making a big pass play downfield.

More on the specific plays in the next article.