Inside the Clemson Offense: The Trap

Share All sharing options for: Inside the Clemson Offense: The Trap

We’ve covered the HB Trap play before here, but we used it so much during the Spring Game that I think it’ll be a play you see early and often to start this season, at least until the zone read game really starts working, so we'll highlight it once again. In my film study of Tulsa, I did not notice the trap being so heavily featured, so I do not believe its necessarily a go-to play, but it is in the package.

Traps are a quick-hitting compliment to longer-gainers like the zone read and other option plays from the spread that work off deception. Plays like the Power O and Isolation are on the other side of the coin, and work off raw power. You need to balance power and deception to be a solid running team. As should be becoming clear by now in this series of plays we’ve covered, many of them look similar yet are very different.

The trap comes in two basic varieties: long trap and quick trap. Anyone on the OL can run a trap, in principle. Most spread teams get the quick trap working well, because you almost have to run that play when you only block with 5 men and need a downhill running play to get you 3 tough yards when you need it. Quick traps usually involve the guards blocking a DT, and longer traps can use a G or T to hit an offside DE.  The quick trap can be run to either side of the defensive front, though I’d prefer to run to the side of the 3-technique.

The trap gets its name from the fact that a DL is initially unblocked by the man he expects to block him, only to be hit by someone he doesn’t expect or see coming, i.e., he's "Trapped" and sometimes completely earholed. In Morris' and Rodriguez’s system, its usually the 5-technique, or DE, that is untouched by the OT across from him, and when he steps into the backfield to try to make a play, he gets hit by a Guard from the other side that he may not see coming. 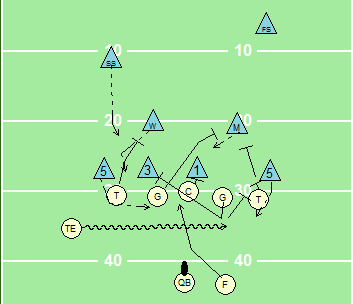 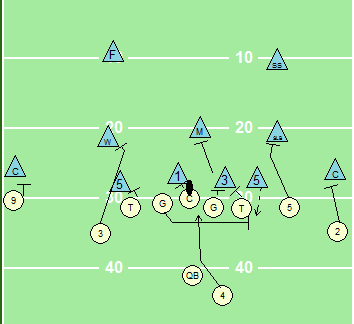 The basics of a 5 technique Guard trap:

Playside T – blocks down on the 3 with the Guard, then can release to take out the first threat to the inside (usually MIKE).

PSG – blocks man-on the 3 with the PST, can release if the PST has better leverage on the 3 (depicted)

C – blocks back on the Nose Guard

BST – fan blocks on his 5 technique

RB – takes one step 45 degrees and reads the playside LB, with an aiming point of the Center’s playside foot.

Certainly this can get more complex, and when you trap to the side of the NG it is more likely to see the Tackle trap the other 5, but that’s a basic long trap of the 5. Other factors do come into play, such as the ability of your Tackle to get over there in time to trap, for example.

Quick traps are a little more common with the spread formation offenses, and in the diagram depicted below I’ve done the trap on the 3. The 3 aligns off the outside shoulder of a Guard, so it is easier for him to simply go past the 3 to the LB than it would be if he were aligned as a 2/2i technique Iinside shoulder of the Guard). The 3 is left unblocked and the BSG comes off the Center’s butt and wallops him, often catching him completely off-guard. The Center blocks back on the NG and the RB takes it right up the A-gap. 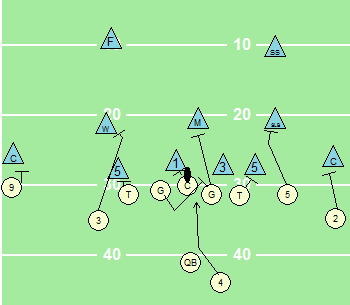 As a quick aside, a defense that covers both guards with DTs (an EVEN front) would invite the Center to trap a 5-technique or an influence trap. 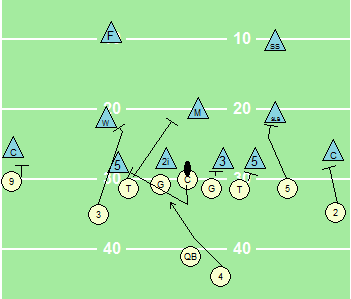 Technically, any trap block is an influence block. When the 3 is unblocked, he's "influenced" to come into the backfield, only to get earholed. What I would call the influence trap is a bit different. The influence is a type of block where, for example, the PST veered to take a LB (leaving 5 unblocked) and the PSG stepped back and outside as if he's in a pass block set, influencing the 3 to come up field. The 5 would engage the Guard if its done correctly, except that the 3 gets trapped by the BSG coming around behind the Center. Most of the time the 3 wouldnt even see the BSG coming til its too late. 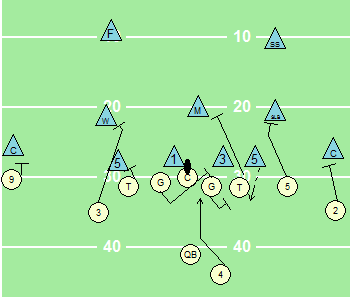 There are many more ways to run a trap and I’m being deliberately simplistic so this article doesn’t become 6 pages. Just know that we are not going to run 100 types of trap here; Morris will keep it down to a couple types for simplicity.

Clemson fans have seen traps more during the days of Rich Rodriguez, but Spence did occasionally run the play. It has been almost nonexistent in our scheme since 2007. SC used the quick trap to success against us in 2009 in Columbia, and was the primary play they ran the entire game, along with the Midline option play that works off it. Morris does not seem to use the Midline option play, but it’s a prominent part of the Oregon system.

This vid involves kids, but it is the basics of the trap block inside.