Inside the Clemson Offense: Notes and Formations

Share All sharing options for: Inside the Clemson Offense: Notes and Formations

A few notes on the HUNH offensive philosophy that don't quite fit with the run game or passing game, but are integral to understanding the system. We can contrast these with what we are more accustomed to within the usual "pro-style" system as well.

Next we'll go into the base formations and positions in the offensive system.

I think the first thing to grow accustomed to within this system is that the running back that stands with the QB in the shotgun (which is all this offense is outside of goal line) is called the Fullback. If that doesn't make you realize that this system is just the Wing-T from the gun, I don't know what will. He is used like an H-back/TE a little more than a ballcarrier though.

The offense has another player called the Tailback who is used like a motioning WR, plus H-back, plus TE. Its a little backward, but think of it as simply a place to stand rather than a true position.

Andre Ellington would be used as both positions, but a guy like Diehl would be the FB in some sets or a dedicated blocker beside the QB on passing downs when the protection is needed.

Positions in the scheme, which you should think of as simply being places to stand for now:

Obviously we don't have enough multi-purpose guys to fit a few of these positions and I've left it pretty general, so at times you could see Diehl as the 3, but moved around like an H-back and blocking, and at other times you could see Mike Bellamy there getting the ball on a sweep. You could see Hopkins as the 5 most of the time, or even as the 9. One could see Watkins as the 2 or the 5. I don't want to get too far into how everyone will be used just yet, because it'll be apparent when we get into the running offense that several guys will be standing as different-numbered positions.

The base formation is spread doubles. Everything returns to this formation when the play is called in. 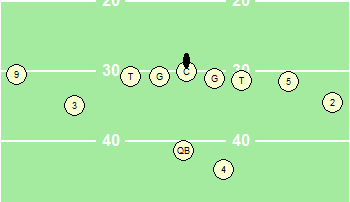 2-back Right moves the 3 into the backfield, with the Right side unchanged. 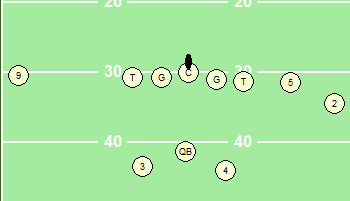 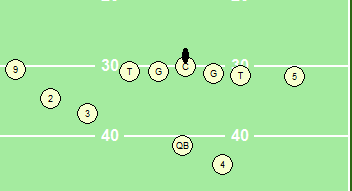 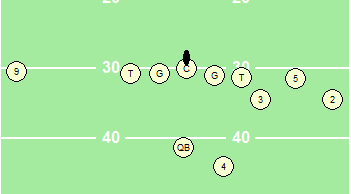 2-back Right Stack moves the 4-back behind the B-gap about 1.5 yards off the LOS, he's more of a lead blocker here. The 3 man is 1.5 yards behind the QB. This is like going to the I-formation within the shotgun. The left stack would flip the backs to the left, and bring the 2 over in the slot to the left side. 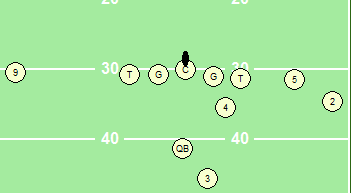 5 Right is a 3x2 Empty set, with the 4-back moved 4 yards outside the OT on the right. 5 Left shifts the 3-man over further to the left and the 4-man is brought over to the left side. Generally in empty sets, we'll motion into 2x2 looks. 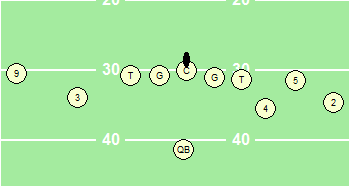 There is also a Quads Right set where only the 9 remains on the left, and Quads left leaves only the 5 on the right. In addition, there are sets with more "normal" TE usage and alignments (e.g., taking out the 3 above and putting a TE on the LOS) and stack sets without a TB, along with the bunch set and Inverted wishbone.