Fan attendance is a discussion topic and is often seen as a reflection of fan support and program success.  Today we will look at attendance figures along with several other items among schools in the ACC in 2010.  Overall enrollment numbers and stadium data for ACC teams were attained from Wikipedia here and the average attendance numbers from the NCAA here.  I believe the enrollment numbers include graduate students so they may look a little higher than one would expect.  The overall information for ACC schools can be seen in Table I below and graphical representations shown in subsequent figures. 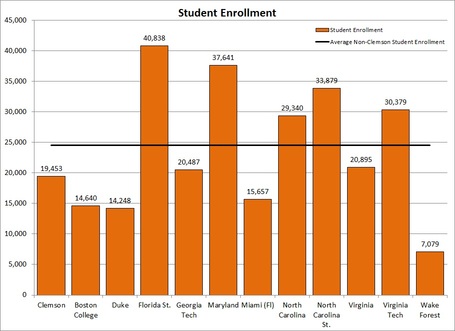 Figure 3 shows the listed stadium capacity for each ACC school.  FSU's Doak Campbell Stadium is listed as the largest in the ACC at 82,300.  Death Valley, after the renovations and WEZ project, is listed at a capacity of over 80,300.  Miami's Pro Player Stadium (or whatever they call it now) can hold 76,000 folks and Virginia tech seats around 66,000. 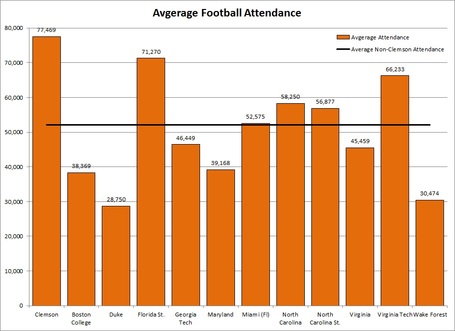 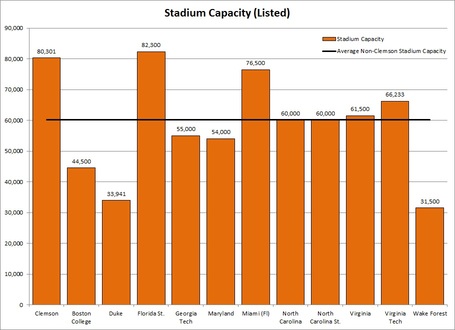 We show the average percent of capacity for all ACC teams below in Figure 4.  You will notice that VT has perfect attendance while Clemson scored a very respectable 96.5% in this category.  I will admit, I was a little shocked that some of these teams scored as high as they did in this category.  Duke, an obvious one, did bring in extra seating for the Bama game for an attendance of nearly 40,000 fans.  Miami was the anchor of this category with under 69% capacity for its home games (which, just by television pictures, is a lot higher than I expected). 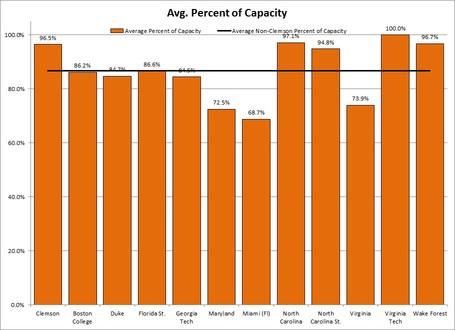 The final graph we will show illustrates attendance per enrolled student.  This is a quirky statistic that takes some interpretation.  At face value it shows programs that are able to attract patrons not attending the university.  This can be interpreted as attracting both former alumni as well as people who never attended the university to come out and enjoy a game.

The student body size in comparison to the stadium size is a major drawback to this metric.  Also, not all schools have generous student ticket policies (like Clemson).  Many schools out there do not include football tix in activities fees and may only distribute home tickets through a lottery system.  I am not familiar with all ACC policies, so this description is pretty generic.  I will also add that I was not able to find statistics regarding actual student attendance for all schools involved in this survey. 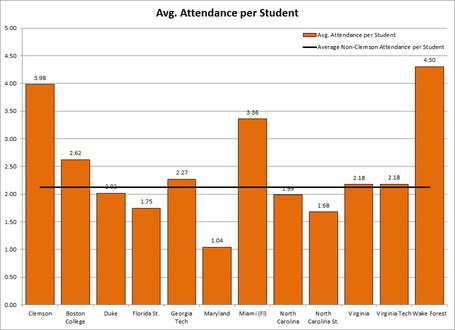 Overall, if anyone complains about Clemson's fan participation in relation to other ACC schools they are just stupid.  Clemson, at 6-7, led the league in attendance.  Clemson had a better turnout than future National Champion ACC Champion Florida State.  There is no support problem in Pickens County.

I will say that having a larger alumni base should make it easier to fill a stadium...just saying.  I will also say proximity to higher population centers also fill stadiums quicker. Clemson has a relatively small student body and is not exactly located in a metropolis yet still attracts a large number of fans (some former alumni, some not) who are willing to drive a couple hours to catch a football game seven times a year.

Further, Clemson's large attendance to enrollment ratio is impressive.  We discussed the shortcomings of this metric earlier, so I won't revisit that.  We do note that when you have a 30K stadium, it's one thing.  When your stadium is the third largest population center in the state, it's another.  Clemson has a pretty small student population and brings in lots of fans despite the lack of alumni base other schools enjoy.  If a Clemson coach ever questions fan support, he/she should be punched in the face.

Well, apparently somebody from Tennessee started talking trash about Clemson fans and this was Mr. Coleman's reaction: