Inside the Clemson Offense: Inverted Veer/Dash

Share All sharing options for: Inside the Clemson Offense: Inverted Veer/Dash

Clemson fans have seen this one before, and this video we clipped out a couple years ago of this play will probably get your blood boiling. I'd call it a variation on the zone read, but with the addition of a pinch of the Power O or Counter Trey play to the recipe. Chris Brown disagrees with me, but thats OK.

You start with the Zone Read we explained earlier, and then add the guard pull into the hole and invert the QB and RB. If the defense is cross-reading, this will totally screw them up, which is why TCU ate us for dinner with this play against bad LBs. Auburn's Cam Newton really ate up defenses with this play last year as well. In effect, you're replacing the FB Dive of the Wing T option with the QB Dive, and the RB is the outside threat on the sweep/stretch movement. That and the alignment are where the "inverted" part comes from.

Instead of leaving the backside End unblocked as in the zone read, in this play you leave the playside End unblocked. The OL on the playside veer blocks, and the Guard from the backside pulls around. Next, you move the RB to the other side of the QB, so he's coming from the backside, and have him run a sweep or stretch (outside zone). We would also use the 2-man in motion on the jet sweep to do this, with the 4 as a lead blocker, like a QB Isolation. 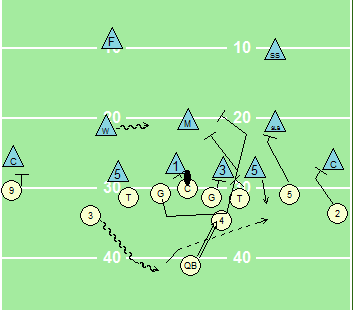 Above I've put the 4 at his stack alignment, and he's a lead blocker. 3, the Tailback, motions into the backfield and WILL mirrors him. 3 then takes a sweep or outside zone motion at the snap and the DE takes him. 4 goes into the hole and hits the first threat he sees, and the Guard follows and wraps. The QB just follows them all into the hole. One could also use the 4 to block the DE, like in a Counter T play. 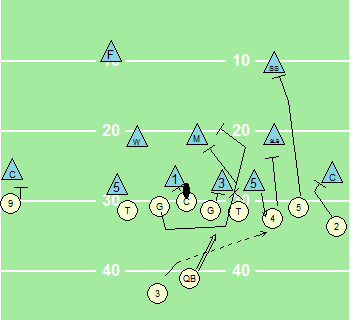 Same thing, from a different alignment. Again below, with the 2 man in motion from an Empty set. The 3 could either block inside on the the WILL, or run a Corner route downfield to preoccupy the FS and WILL. 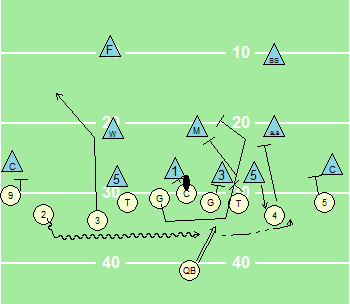 I have heard the WR-Jet motion version called the "Jet Blash" instead of the "Dash" or "Bash" (back away sweep).

One doesn't have to run the Inverted Veer with the "Power O" addition, and Auburn often doesn't pull the guard. We could see the 4 as the sole lead blocker isolated on the LB. Offensive Breakdown has done a nice pictorial version of Auburn running the various forms of the Inverted Veer here.