Share All sharing options for: TE/FB Recruiting Analysis: Clemson vs. non-ACC 2006 to Present

Today, we compare Clemson's FB/TE recruiting to non-ACC teams.  Assumptions made in creating this article can be found here.  I should point out that we strictly used www.scout.com position classifications.  It is possible that some players ended up at a different position ball after they arrived on campus for any of the schools in this article.

This analysis is, like the special teams one, unique.  I was not sure how to categorize both the TE's and the FB's.  Both groups of players are unique from their offensive line and tailback brethren that they are with whom they are traditionally grouped.  We wanted to single the guards, centers, and tackles in the OL analysis and the tailbacks in the running back section.  Further, both the FB's and TE's often lineup in the H-back spot, are featured lead blockers, and have pass catching abilities.  Also, members of each of these positions often play the other.  While this may not be the best classification, I had to make some decisions and these are the reasons for putting these guys in this category.

Table I and Figure 1 (below) both illustrate Clemson's ranking based on defensive line class size since 2006.  Clemson (at 1.33 players per class) was better than only UGa (1.17 ppc).  LSU and Auburn both averaged two players per class.  The other SEC schools tied Clemson and S Florida scored one and a half players per class.  Clemson trailed the overall average by nearly a quarter player a class. 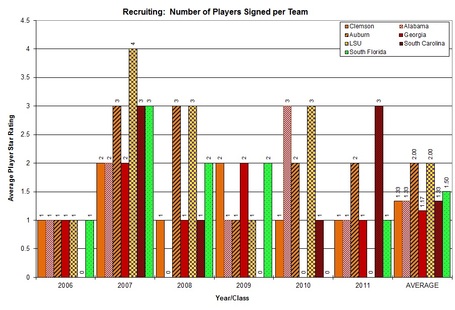 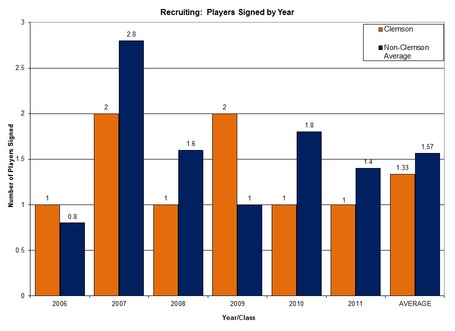 Table II and Figure 3 show the average star-rating per player for each team, as shown below.  Clemson (2.92 stars/player) trailed all teams in this group sans South Carolina and South Florida.  Clemson was 0.15 stars per player worse than the field average overall, as shown in Figure 4.  Georgia was the class of the group at 3.65 stars per player.

Again, we have made the effort to list all the TE/FB's signed by these teams since 2006. 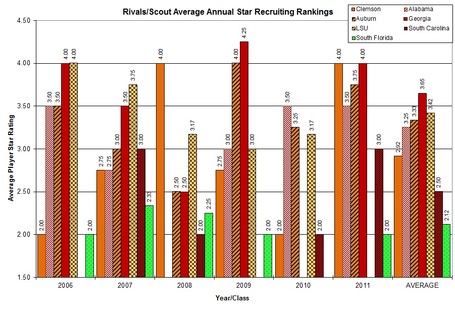 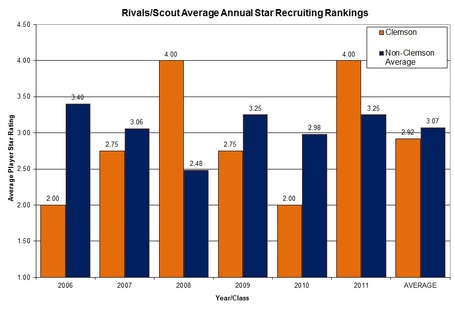